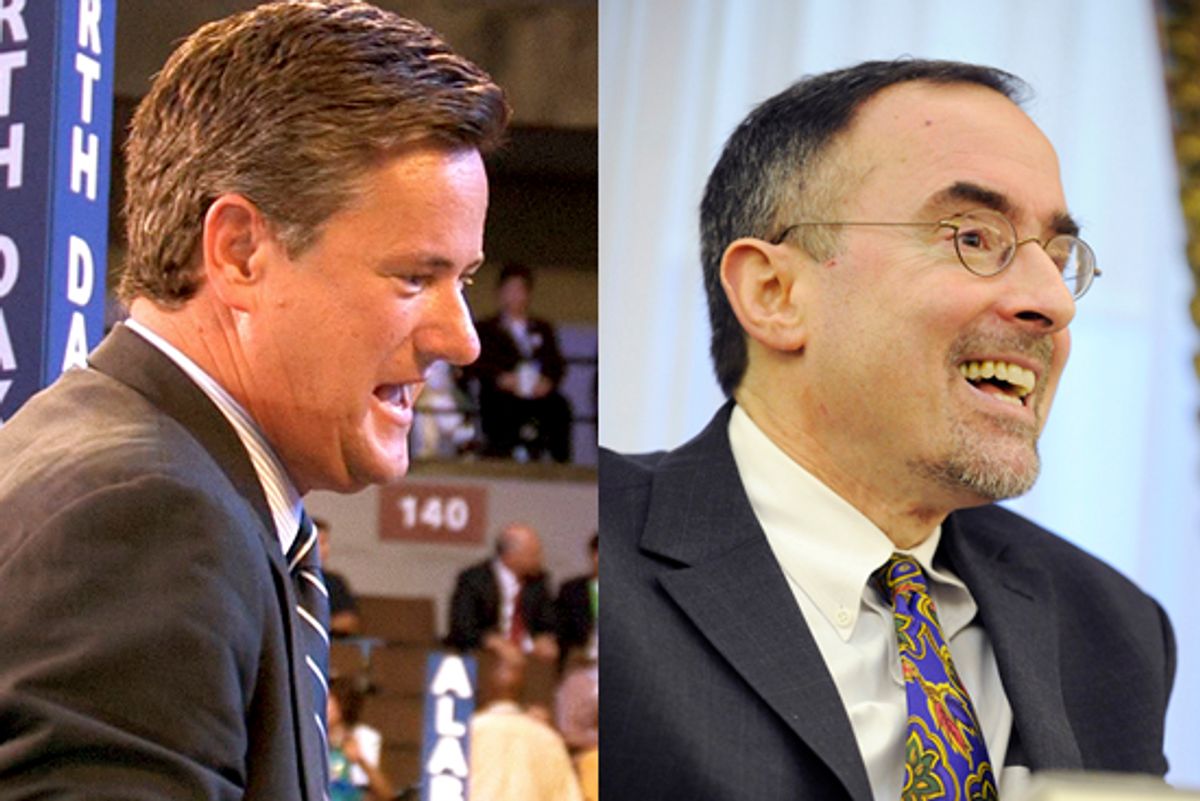 Oh man, the new Politico Opinion section launched yesterday. I can't believe I missed it! (Although it looks like Politico's Ben Smith missed it, too. So I don't feel so bad.) Can you feel the excitement? People with political opinions, in Politico! Two people, specifically. Longtime liberal editor and columnist Michael Kinsley, and former Republican congressman and current morning talk show host Joe Scarborough. How's that excitement doing? Still feel it?

I'll say this: Michael Kinsley has been published everywhere on earth, and anyone who's read any liberal political opinion outlets over the last 30 years knows what he thinks about politics (except when his dormant Slatiness emerges and he unleashes a wildly counter-intuitive opinion), but he is a smart and engaging writer. His column today concerns the concept of "intellectual honesty." His argument: In the press, factual accuracy is prized, while intellectual honesty is entirely absent. Indeed, in much of the Washington press (like, say, Politico), intellectual dishonesty is celebrated as political skill. Then Kinsley makes fun of Mitt Romney. So, it's a Kinsley column.

But! Counterpoint! Conservative Joe Scarborough also has an opinion column, to balance out Kinsley's joke about Mitt Romney. Scarborough's argument, today: The White House should stop "mixing its message," by which he seems to mean "engaging in politics."

Scarborough is not now and has never been a professional writer. His paragraphs have a USA Today-like brevity. He repeats his lame points (in a column that's 100 words shorter than Kinsley's). His argument, such as it is, rests on questionable assumptions, false equivalencies, and a facile understanding of history and the political process. It's like someone challenged a high school student to write a David Broder column. (Michael Bloomberg should sponsor some sort of "Reasonable Centrist Essay Contest," like the stupid Ayn Rand Institute thing. Morning Joe could win a scholarship!)

Explain what is wrong with the Obama presidency, o wise Morning Joe!

In 2008, Obama won with a huge wave of independent voters. In 2010, polls show independents leaving Democrats in droves.

In 2008, Obama impressed many Republicans I met on the campaign trail with his promise to bring a more mature, post-partisan style to Washington. In 2010, Gallup’s polls show him to be the most polarizing president in modern history.

Making matters worse for the president’s damaged brand, The New York Times reports that his party plans to launch the most negative campaign in years. Democratic strategists helpfully explained to the Times that the purpose was to distract voters from Obama’s record over the past two years.

So it’s come to this: Obama’s campaign themes of Hope and Change have devolved into a nasty and brutish off-year campaign message that will focus instead on tax liens and divorce filings.

The White House is mixing its message in a way that won’t save Democrats in 2010 — and may have a profound effect on Obama’s brand moving forward.

I believe Obama, like George W. Bush before him, believed he could be a uniter and not a divider. But he was also determined to achieve his vision of an activist federal government, and he was told early on that the only way to do that was by first being the Democrat in chief.

That was certainly his right as president, but he should not be surprised two years later that his daily decisions had the consequence of dividing the country and driving his approval rating from 70 percent into the mid-40s.

Here's what happened in reality: Midterm voters are always older and whiter than general election voters. Republican voters are energized in opposition to a Democrat, something that happens every time there is a Democratic president. A president's approval ratings nearly always track with the state of the economy and the unemployment rate. The president's problem has little to do with messaging, and much more to do with history and economics.

It’s just too difficult for some voters to fathom how the same man who once told Americans, “I will listen to you, especially when we disagree,” has become the cranky politician who recently told Rolling Stone’s Jann Wenner that Democrats who don’t enthusiastically support him are “irresponsible,” liberals who are disappointed in him aren’t “serious” and tea party members who challenge him may be moved by “darker” motivations.

When you see a columnist just quote individual words and not whole sentences, it's usually safe to assume that someone is being taken taken out of context. If the quoted words make the speaker sound bad, the complete sentences usually make that person sound much more reasonable. For example, using the same interview, I can say that Barack Obama said that it's "irresponsible" to complain instead of working to further the progressive agenda, which seems a fair point. Here, for reference, is what Obama said about the Tea Parties:

I think the Tea Party is an amalgam, a mixed bag of a lot of different strains in American politics that have been there for a long time. There are some strong and sincere libertarians who are in the Tea Party who generally don't believe in government intervention in the market or socially. There are some social conservatives in the Tea Party who are rejecting me the same way they rejected Bill Clinton, the same way they would reject any Democratic president as being too liberal or too progressive. There are strains in the Tea Party that are troubled by what they saw as a series of instances in which the middle-class and working-class people have been abused or hurt by special interests and Washington, but their anger is misdirected.

And then there are probably some aspects of the Tea Party that are a little darker, that have to do with anti-immigrant sentiment or are troubled by what I represent as the president. So I think it's hard to characterize the Tea Party as a whole, and I think it's still defining itself.

Do you think the voters who were thrilled to hear Obama say he would listen to people that he disagrees with would really be unable to fathom how the same man could think that the Tea Parties are a diverse group of Americans with serious and sincere policy disagreements and also a few cranks who hate immigrants? Are we not allowed to say that any elements of the Tea Parties are animated by racial resentments? I'm willing to bet Joe Scarborough has a more cynical impression of the Tea Parties than the one Obama expresses here.

After that detour into non-intellectual dishonesty, Scarborough explains that both sides are very irresponsible about demonizing presidents (poor Bush was called names by Democrats, but to be fair, Clinton was also called names, etc.). Then, gloriously, he blames the White House for the preponderance and prominence of these smears and slanders.

I cannot believe those inexperienced White House aides invented and popularized Fox News, established the conservative media machine, donated millions to various right-wing nonprofits, and then created Newt Gingrich in some sort of lab. How foolish of them! Didn't they know what that would do to the president's brand?!

Scarborough's prescription for what ails the president? He must "once again seize the high ground." What does that mean, exactly? He doesn't explain, but he does refer to Obama's "brand" three times, which is why Politico hired him in the first place.