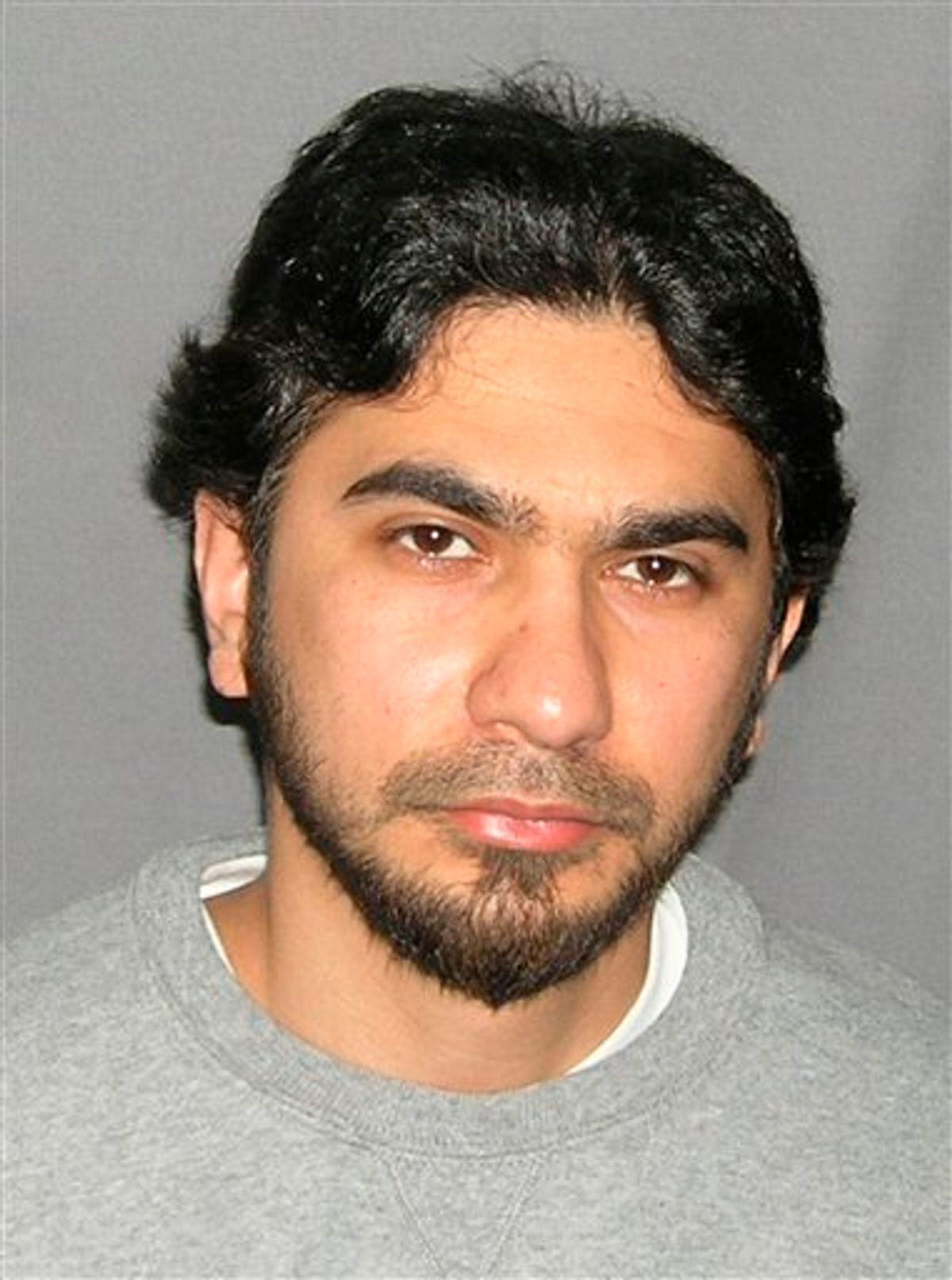 FILE - This undated file photo originally released by the U.S. Marshal's Service on May 19, 2010, shows Faisal Shahzad. A dramatic videotape of the FBI-staged test blast has become a key piece of evidence against Shahzad, who faces a mandatory life prison term at his sentencing Tuesday, Oct. 5, 2010. (AP Photo/U.S. Marshals Service, File) (AP)
--

The man who plotted to kill Americans by driving a homemade car bomb into Times Square and leaving it to explode has been sentenced to life in prison.

A federal judge gave Faisal Shahzad a mandatory life prison term at his sentencing Tuesday in Manhattan federal court. The bomb he had packed into the back of an SUV sputtered, injuring no one in a Times Square packed with tourists.

Calling himself a Muslim solider, a defiant Shahzad pleaded guilty in June to 10 terrorism and weapons counts.

Shahzad, a former budget analyst from Connecticut and a Pakistani immigrant, was arrested two days after his May 1 attempted bombing.

NEW YORK (AP) -- The scene in a remote spot in Pennsylvania was exactly what authorities say failed bomber Faisal Shahzad had wanted on a busy evening in Times Square on May 1.

An improvised car bomb -- a 1993 Pathfinder fitted with 250 pounds of ammonium nitrate and diesel fuel, three 25-pound propane tanks and two five-gallon gasoline canisters -- blew up with a force that ripped the sport utility vehicle in half.

The explosion also caused a giant fireball that overturned and shredded four other cars parked nearby in an open field, obliterated about a dozen dummies posed as pedestrians and shot fiery debris hundreds of feet in all directions.

A dramatic videotape of the FBI-staged test blast in June has become a key piece of evidence against Shahzad, who faces a mandatory life prison term at his sentencing Tuesday in Manhattan federal court.

Technicians studied Shahzad's design before using it to build a working model they say demonstrated his deadly intent.

"Had the bombing played out as Shahzad had so carefully planned, the lives of numerous residents and visitors of the city would have been lost and countless others would have been forever traumatized," prosecutors wrote in court papers.

Shahzad's bomb fizzled before it could do any harm, doomed by faulty wiring and ingredients such as a low-grade fertilizer that couldn't explode.

The Pakistan-born Shahzad hasn't disputed the allegations while under interrogation and taking a guilty plea.

In fact, "he spoke with pride" about the scheme, in which he bragged that he wanted to kill at least 40 people, the government said in a sentencing memo. If he escaped arrest, he added, he hoped to set off another bomb two weeks later in a second, undisclosed location.

"While it is impossible to calculate precisely the impact of Shahzad's bomb had it detonated, the controlled detonation ... demonstrated that those effects would have been devastating to the surrounding area," prosecutors wrote.

Calling himself a Muslim solider, a defiant Shahzad pleaded guilty in June to 10 terrorism and weapons counts, some of which carry mandatory life sentences.

Unless the U.S. leaves Muslim lands alone, he warned, "we will be attacking U.S., and I plead guilty to that."

Shahzad has said the Pakistan Taliban provided him with more than $15,000 and five days of explosives training late last year and early this year, months after he became a U.S. citizen.

For greatest impact, he chose a crowded a section of Times Square by studying an online streaming video of the so-called "Crossroads of the World," prosecutors said.

He lit the fuse of his crude, homemade bomb, then fled on foot, pausing along the way to listen for the explosion that never came, court papers said.

A street vendor spotted smoke coming from the SUV and alerted police, who quickly cleared the area. The bomb attempt set off an intense investigation that culminated two days later with investigators plucking Shahzad off a Dubai-bound plane at a New York airport.

A few days later, Pakistani authorities arrested three men on charges they helped him meet leaders of the Pakistan Taliban, a militant group based in the northwest of the country that has claimed responsibility for the plot. They also are accused of sending him cash in the United States when he ran short of money.

The men's lawyer says there's no evidence to support the allegations and that the men had been forced to sign confessions. A trial date has yet to be set.

Three other men were detained in New England on immigration charges in an investigation of an underground money transfer system used by Shahzad, but they were never charged with any crimes.