I'm not too proud to love a McDonald's sandwich

As a kid, I hankered for McNuggets. Now, though it pains me to say it, the Southern Style Chicken is actually good 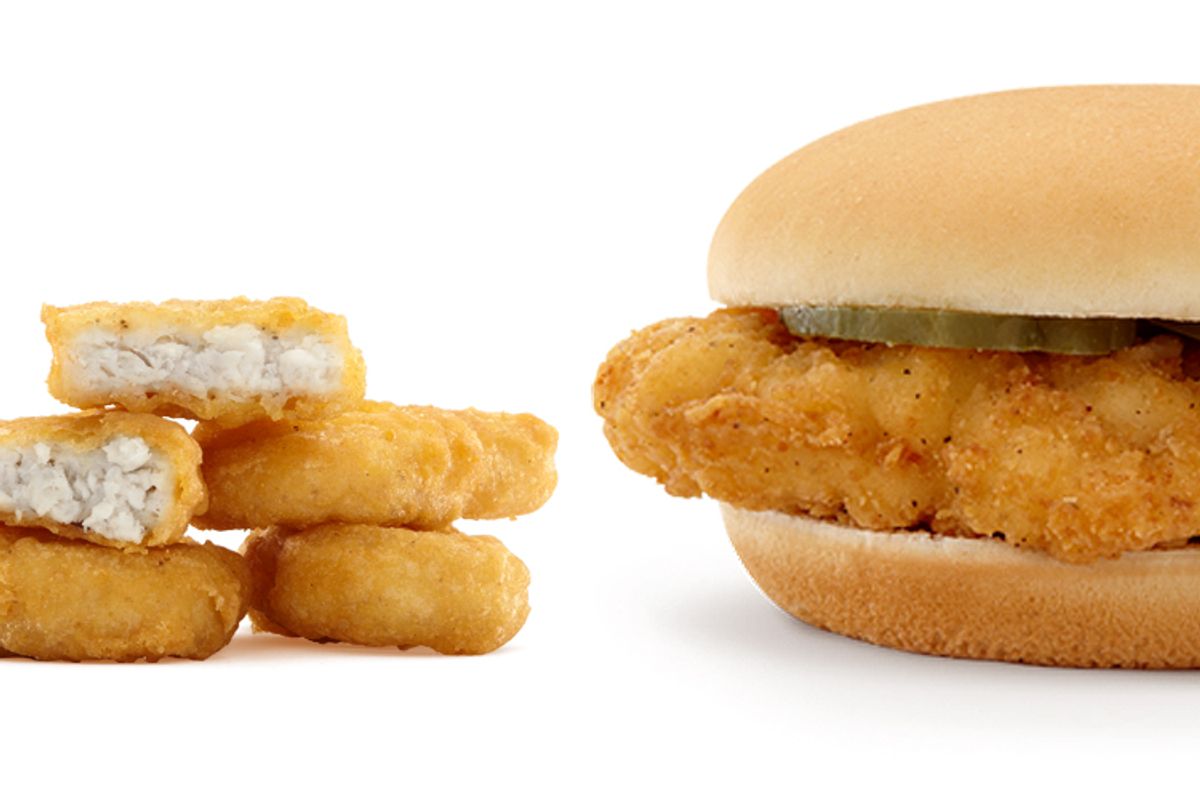 Sometimes I do things I'm not proud of. Like yesterday, when I was leaving an inspiring chefs conference on sustainable food, got to the bus station to go home, and found myself in line at a McDonald's.

Actually, my first love at the Golden Arches was the Big Breakfast, from when my parents would wake up on Sunday, their one day off a week, and take us out for squeaky Styrofoam trays of eggs, sausage patties and those weird and awesome slipper-shaped hash browns. It made me feel like an American. Later, as I grew older, I flirted with the Filet-o-Fish, but when McNuggets hit the scene, I was a goner. They hooked me by my plump cheeks and reeled me in, those stamped-out chicken-ish chunks of juicy golden deep-fry engineering. And let's not get started on the plastic cups of barbecue sauce, shall we? Because you'll have me crying the tears Proust kept to himself.

So: McNuggets. It's been years since I encountered a McNugget. I knew we'd grown apart when I saw the "I'm a NuggNut" ad campaign, featuring couples with McNugget wedding cakes and such. Amid all their jubilant, asinine McNugget revelry, I felt nothing, and I once counted it a badge of honor that I ran the McNugget Gauntlet: eating six-, nine- and 20-piece boxes all at once. And here I am, 15 years later, with a head full of sustainable-food conflict, getting a tiny four-piece box of McNuggets they sell to young children and, because I'm curious about what they mean by their "Premium Chicken" line, the nearly no-frills Southern-style Chicken Sandwich

I bore down on my tray of pasteurized processed chicken food product and went straight for the boot-shaped McNugget (real fans, even ex-fans, know the four shapes by heart). The crunch was superb -- a crunch provided by what McDonald's now refers to, with cosmopolitan flair, as "tempura batter." (Seriously.) But there was something strange with the texture, an overly chewy verisimilitude of meat, and I suddenly recalled that years ago McNuggets were ballyhooed to now be "made with white meat," and that they no longer contained the horrifying paste called "mechanically separated chicken." (More on that tomorrow, kids!). So I guess McNuggets had grown up too, and in the process they lost their unnatural juiciness to simulate a natural breasty toughness. I'm not sure that's a win.

They are still tasty, though; that I can't doubt ... until you get this weird, creeping chemical bitterness that shows up a moment after you've finished chewing. But, hey, you won't ever get there if you dunk another nugget in syrupy barbecue sauce and get it in your mouth before that happens. So is this a side effect of the process, or are they engineering these things so we stuff our faces harder, better, faster, stronger?

Ostensibly less engineered is the seemingly plain-Jane Southern-style Chicken Sandwich. One may wonder what McDonald's obsession with the South is these days, what with the "Southern Style Sweet Tea" and such. I have a theory that we collectively think of Southern food as our national comfort food, and with the economy in shambles, it's banked (correctly, it seems) on us wanting a little comfort in the drive-through. But really, I think this sandwich is just McDonald's giving Atlanta-based regional superstar Chick-fil-A the middle finger. That god-fearing chain built its empire on austere fried chicken sandwiches with two slices of pickle and a y'all-go-to-church-now-y'hear? closed-on-Sundays policy. So here come the heathens from up north, serving up the same exact thing seven days a week.

And, it turns out, despite my belief in regionalism and the necessity of sustainable food, I have to say this: It's surprisingly good. This is as Spartan a sandwich as you can find in the fast food stunt era: a slab of industrial bird breast, fried with purpose, a delightfully smushy bun, a couple of pickle slices, and a coiling squeeze of "butter." (It's actually "liquid margarine," a phrase that somehow manages to make margarine sound even less appealing than it normally does.)

I ate it straight-up, no doctoring, no packets of barbecue sauce, and with so little distraction, the twin pleasures of crunch and smush took over. The breading's texture was so good you could hear it, giving way to an only slightly unnaturally moist chicken breast, all coddled in the softest bun ever, a bun I might consider laying my head on at night. Add a tart spark of pickle every other bite or so, and this was a sandwich that continually surprised me with its semblance to real food. I started thinking, in mid-bite, if I should give this sandwich a call again at some point.

And then I started wondering about my relationship with McDonald's, with fast food. Should I be proud that I've traveled so far from it? Should I be ashamed that I compromised my sensibilities? Should I be worried about being a snob? I thought about these things as I was writing this story. But then, taking a step away from the computer for a break, I snapped to. I'd been whistling the McDonald's jingle for minutes, entirely without realizing it. It'll have its way with me yet.