Sign of a culture in terminal decline? A consumer revolt sends biodegradable plastic back to the lab 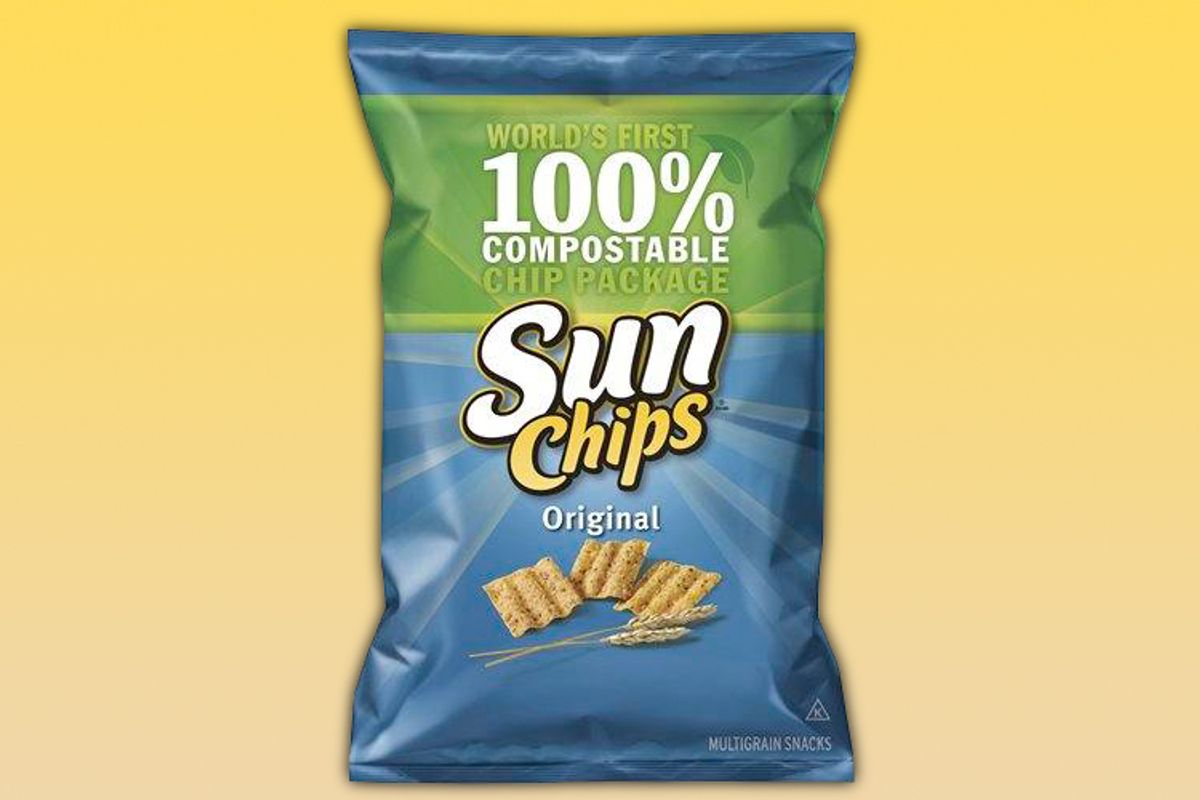 The news that Frito-Lay is withdrawing its new biodegradable SunChips bags because consumers found them too loud has driven Atlantic.com's wonderful Alexis Madrigal into a state of mad despair at the nutty extremism of modern capitalism. A country that once cracked the atom is now devoting its resources to perfecting the molecular structure of snack bags.

Imagine the scientists hunched over the bench constructing the nearly perfect biobag; the process engineers who scaled up the manufacturing line and worked out all the right controls for stuffing and sealing; the business people who cut the supplier deals and sold retailers on the novelty, begging for endcaps; The middle managers who ran the numbers and kept things moving; the quality control folks who noticed "the sound problem" but figured it was no big deal; the focus group consultants who said consumers liked the bag's design and how it made them feel, observing only in the "Use if Needed" slides though the bag had a good handfeel, it might be too noisy.

This is where we put our productive talents to work. These are good, white-collar jobs. Most of them you'd need at least a college degree to have and to hold. The great machinery induced by billion dollar markets for everything (anything) can be reconfigured for any purpose, even something as mindnumbing as flexible, lightweight chip containers.

And as this dawns on you... You think with the soaring, half-serious tone that we reserve for visions of collapse: This is what happens to a country that no longer dreams, that has lost its sense of national purpose or greatness. You think: Maybe we do need a space program, so that we start looking up again.

One could quibble: The application of the best and brightest to the invention and deployment of a biodegradable replacement for plastic isn't necessarily a waste of resources. Plastic is evil -- let's get rid of it! Frankly, I am more amazed at the amazing sensitivity of American consumers than I am at the obsessive innovations of snack food marketers. The Wall Street Journal reports that sales of SunChips declined every single month since the introduction of the new bags. We care, we really, really care. Therefore, we are doomed.

But you know -- that's what people do. We're obsessive. Frito-Lay's attention to snack bag molecular structure is not so far removed from the unbelievable care and attention that some Japanese farmers devote to growing the perfect apple. There is no limit to our capacity to go deeper into whatever fascinates us.

And yet, I understand where Madrigal is coming from. Setting the merits of plastic vs. biodegradable aside, the awesome resources and brainpower directed to essentially meaningless innovations in consumer culture in the United States do seem to be signifiers of a smallness of spirit, a lack of ambition. This is our manifest destiny?

And then, while you're thinking about that, you learn that China is set to become the world leader in patent filings.

And not just any old patents, either.

Experts acknowledge that it is difficult to measure the value of China's patents (many may be for low-end, incremental technologies), but they say the quality appears to be improving and that China is on a path to becoming a more innovative country.

"It's clear they're moving from low technology to high-tech," says Bob Stembridge, an intellectual property analyst at Thomson Reuters. "We're seeing a stunning emergence of patent filings in digital computing and data communications over the past few years -- close to 4,000 percent."

(Oh, and ... China also has a pretty ambitious space program.)

Some might look at the patent filing trends and see yet another confirmation of America's fading glory, or more unwanted proof of what happens when national priorities are directed toward fulfilling couch potato passions instead of bold visions for the transformation of society. But HTWW prefers to take a broader view. I've beaten this drum before, but I think the entire human race stands to benefit from the incredible production of knowledge that will be generated by the Chinese (and Indian and et cetera) scientists whose potential is currently being unlocked by economic growth and massive government support for research and development.

Maybe we're losing our ability to dream big in the U.S. -- but from a planetary perspective, we may have only just gotten started. And who knows, maybe some kid in Shanghai will ultimately snag the golden prize: a quiet, yet compostable, snack bag.

Consumerism How The World Works