Raising fowl in our yard was supposed to be a fun urban farming experiment. Then it took a turn for the absurd 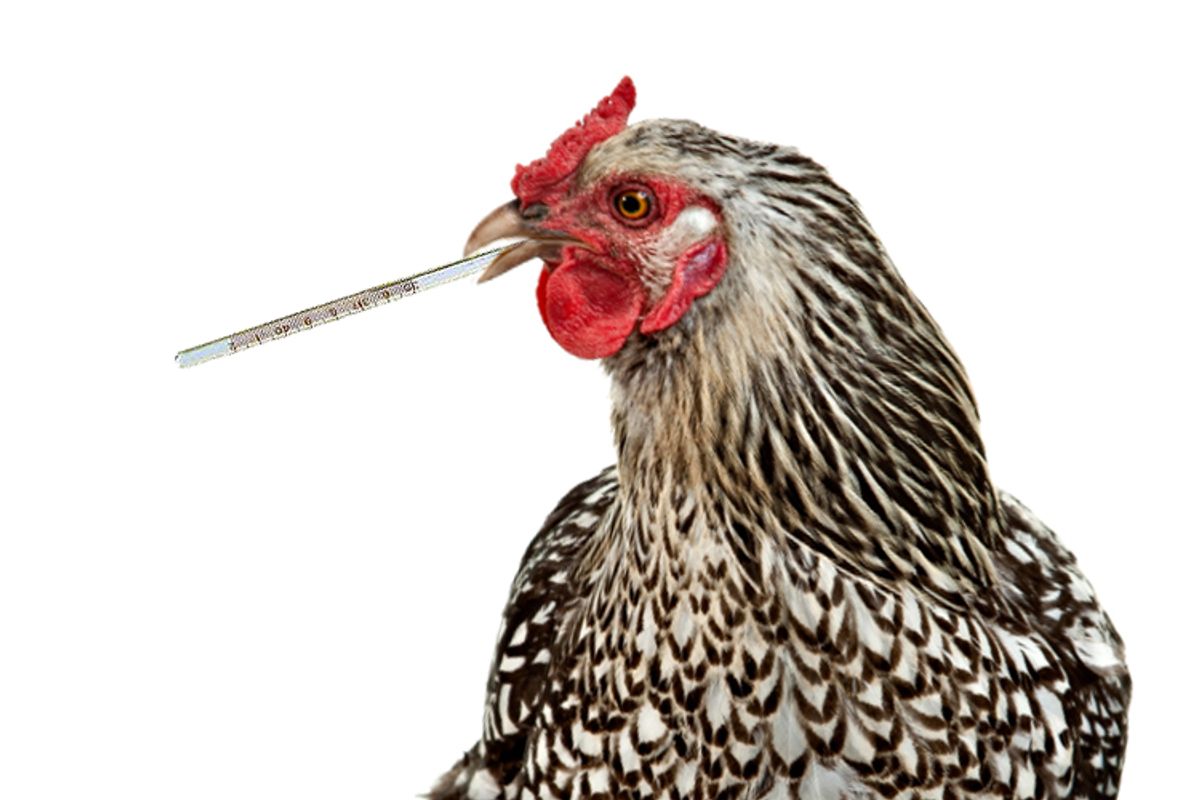 Tallulah was listless. At least I think it was Tallulah. We had four identical Plymouth Rock chickens, and we'd only gotten around to naming two of them -- which two, we weren't quite sure.

After googling "San Francisco" and "bird hospital," I secured a diagnostic appointment for the chicken, who lay uncharacteristically still near the water dish in the coop in our backyard.

The chickens came from my son's first-grade classroom. At the end of the school year, they were going to be sent to the farm if no one claimed them, so we took them home.

We feed our chickens twice a day, give them fresh water when they need it, and clean their coop weekly. In exchange, they produce eggs every day, eggs that we eat, and share with friends, and feel a little bit smug about: We are masters of our urban farm. We eat locally. We tend these beautiful creatures and live in harmony with them. I can't quite say the chickens are our pets, not in the way our cat is our pet. Yet they are somehow part of the family, and so I sat in the waiting room, waiting to tell the vet about my listless chicken.

Others in the waiting room held parrots and cockatiels in elegant wire cages in their laps; I held my chicken in a cardboard cat carrier. My friend Patrick was visiting from Boston, and I'd dragged him along to the vet, claiming it would be an adventure. Patrick and I looked at each other and tried not to titter in this somber place where people brought their beloved pets, a place where we had brought a farm animal.

As we waited, a woman spoke to the vet about putting her parrot on Lupron. Lupron is used to treat many things in humans, most strikingly for halting puberty in transgender children. A transgender parrot. Patrick and I glanced at each other and couldn’t contain our nervous laughter any longer.

At last the vet brought us into an exam room. She asked somberly, "What seems to be the trouble with your chicken?" I bit the inside of my lip to keep from giggling. She examined Tallulah, listened to her small heart with a stethoscope, peered down her beak. She found nothing obviously wrong -- no impacted crop, no pasted vent, no broken bones -- and said that tests would be required for a diagnosis.

On the drive over, I'd imagined a speedy diagnosis of some common chicken problem, maybe an egg stuck in the chute. But there was no stuck egg, no simple answer. We reviewed options and associated costs: X-ray, fecal analysis, blood work.

As we discussed diagnostic tools, treatment plans and discharge orders, I pressed my lips together and flared my nostrils in a moderately successful attempt at mirth suppression. The vet was so earnest, so impassive. She did not know whether we considered Tallulah to be livestock or a treasured pet; I wasn't sure either. I just knew that when the vet proposed the options, they sounded absurd -- and I chose among them anyway, the way I would have for our cat, who I once took regularly to the feline ophthalmologist to treat a rare autoimmune retinal disorder. Extreme measures for our cat made a certain amount of sense. She was our pet, we slept with her at night, she purred and loved us back. I was not going to let her go blind. In that spirit, I agreed to an X-ray and a fecal analysis. I thought: That makes sense.

The vet said that when we took Tallulah home that night, she would need to be kept away from the other chickens, in a 90-degree environment. Patrick and I strategized -- a box in the bathroom with the heat on? A borrowed dog kennel in the hall closet near the furnace? In my heart, however, I knew: I did not want to take Tallulah home. She was languishing. She was stinky. She needed special care. I liked chickens that peck in the dirt and lay eggs and look pastoral. I was aware that I was a small-hearted person who did not deserve to own chickens.

It was past my children's bedtime, so I left Patrick to wait while the tests were done, and I went home to give goodnight kisses. In an hour, I would pick up Patrick and Tallulah. We would put her to bed for the night in the warm box in the closet by the furnace to await test results.

It was not until I was in the car driving home that I was overcome. Not with a giggle, or a chuckle, but with crazed, swerve-into-oncoming-traffic laughter as I understood the ridiculousness of this situation. For authorizing exorbitant tests, I was ridiculous. For not feeling more pain over Tallulah's obvious distress, I was ridiculous and wicked.

I called my husband Evan and choked out a confession: I just agreed to $300 worth of tests on the chicken. He became, like me, gasping and maniacal. "For that money," he sputtered, "we could buy 150 new chicks." But Tallulah, we knew, was at least part pet. We had to try to save her for our children.

When I got home I snuggled the kids on the couch. I explained that Tallulah was very sick, and we were waiting to find out how to help her. They stared at me with big, worried eyes. Then the vet called, saying the news from the X-ray was not good.

She explained that Tallulah's crop -- her chicken stomach -- had exploded. The grit that naturally occupies the crop had moved throughout her body, causing widespread infection. She offered to operate to clean out the grit, but she could already tell there was a great deal of necrotic tissue. ("Did you smell that?" she asked me.) She added that there might not be enough healthy tissue to close the incision. The surgery had a very uncertain outcome.

Some evil part of me was curious about how much the surgery would cost, but I feared I would not be able to ask without chortling. I breathed deeply, waiting as she droned on about necrosis and the likelihood of surgical failure. She finished, "So, if you're not willing to do that, the only other option is euthanasia."

I was flooded with relief.

I asked the vet to hold, and ran the surgery past Evan, trying to speak in code so the children wouldn't understand. He blurted, "No way. We'll put her to sleep." My son, 7, sobbed to his sister, 4, "That means they're going to let her die!"

And then it was a pandemonium of tears and howling and professions of love for Tallulah. My son wailed, "But the chickens are supposed to live with us forever!" My daughter sobbed, "I don't want three chickens! I want four! If I can't have four, I want ZERO!" I held our son; Evan held our daughter. We kissed their tear-stained faces, averting our eyes from one another so we had a fighting chance of maintaining our somber expressions.

With my children wailing in the background, I told the vet it was time to let Tallulah go. She took the news very seriously. After we got off the phone, she turned to Patrick -- who she must have assumed was my husband -- and asked, "Do you want a moment alone with your chicken?"

Being a good and kind man, Patrick simply said, "Yes."

The vet whispered to the tech, "He wants a moment alone with his chicken." She said to Patrick as she closed the door, "Take as much time as you need."

And so Patrick, loving in the face of tragedy, placid in the face of absurdity, stroked the soft feathers of a chicken he had met only the day before and told her it was OK. That the doctor would take care of her, help her to feel no pain, deliver her to a better place. She lay down and closed her eyes, and he said goodbye.

When he left the room, the vet touched his arm gently and said, "I'm so sorry for your loss."

When I arrived to pick up Patrick, he was waiting outside, empty cat carrier in hand, along with a receipt for $383 (including euthanasia). I quickly did the math: 191 chicks, 128 dozen supermarket eggs, or 55 dozen of the most expensive, organic, free-range farmer's market eggs.

Patrick handed me the receipt and could no longer contain himself; we dissolved into peals of laughter. He told me that to authorize euthanasia, he had signed a waiver that asked him to choose between three options: take the chicken, leave the chicken, donate her body to science. He checked the box to leave her.

We looked at each other, tears streaming down our faces, sobering as we realized the kids might be even more upset without a carcass to bury. I could not, however, see bringing home a necrotic chicken.

Instead, the following day, I talked to my kids about grief, about how they are likely to feel sad, then happy, then sad again -- and that's OK, that's what happens when we lose someone we love. They wanted to hear about all the pets I'd lost, all the people I'd lost, how they'd died, how I felt afterward. I went through my list: seven goldfish, nine guppies, two black mollies, one beta, two chameleons, one guinea pig, one hamster, three cats, one father, five grandparents, one best friend. I spoke to them seriously because this is serious business, the business of losing someone we love. Scales, feathers, flesh -- the depth and breadth of feeling may vary with each, but in many ways the loss feels just the same.

We decided to place a memorial stone in the yard for Tallulah. My daughter suggested that we also do something special for the remaining chickens, so we decided to make them a cake: a tall pile of American cheese with Easy Cheese frosting, topped with sunflower seeds and dried cranberries. Tallulah's nest mates unceremoniously gobbled it up.

Eventually, what was left was a sense of loss -- a loss that sat perhaps rather closer to guppy than Dad in my personal grief chronology, but a loss nevertheless. Tallulah hadn't lived a year, she was in some ways more livestock than pet, but she had lived. She was a good chicken. And she was our chicken.

Marci Riseman is a real estate developer in San Francisco. She writes on architecture, real estate, family and urban life.