It's not morning in California

It's an apocalyptic twilight; Barbara Boxer as the new Herbert Hoover 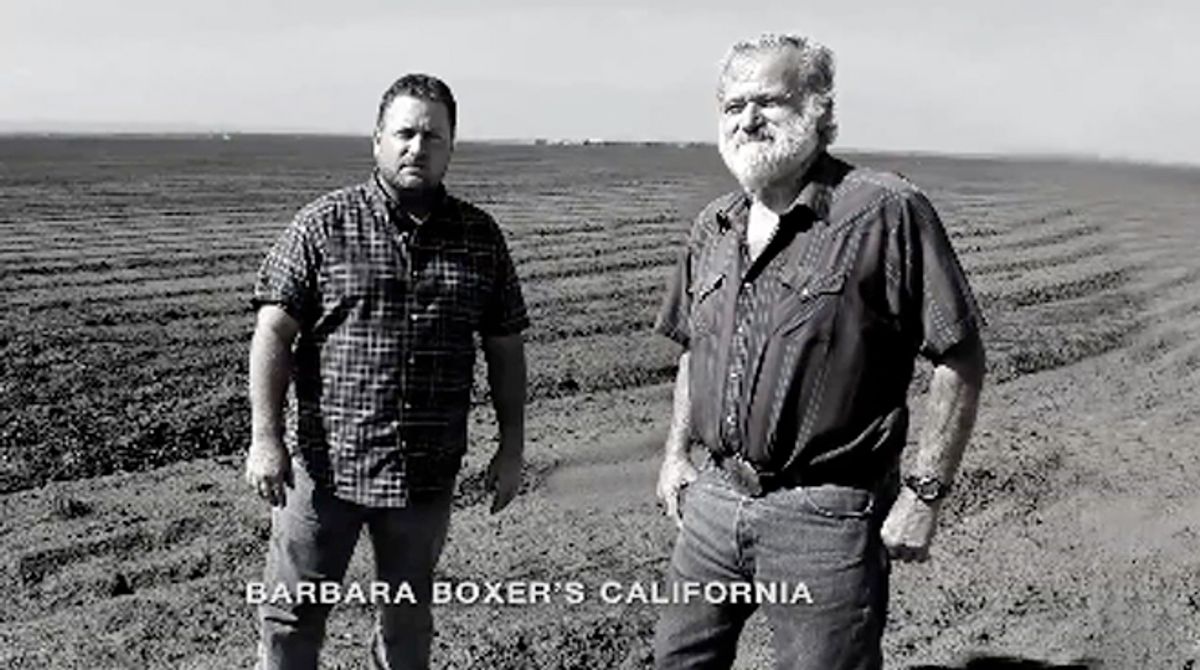 Somebody’s been spending some time researching Google images and the bleak 1930s iconography of Dorothea Lange and Walker Evans.

Carly Fiorina’s new attack on Barbara Boxer goes for the depression jugular, with a stark series of graphic, high-contrast black-and-white shots that paint a eschatological picture of California. One photograph, depicting the liquidation of a retail store, could have been lifted from a Walker Evans retrospective at the San Francisco MOMA

Check out that opening scene. Grim-faced farmers standing on a barren field, a Grapes of Wrathian image if ever there was one. During this, the equally ominous announcer intones:

It’s a calculated effort to move people by activating the neural circuits that exist in their brains. We all have imprints of the calamity of the Great Depression, and this spot seeks to summon them up and pin them on Boxer. As Drew Westen, who wrote “The Political Brain” puts it:

“Electoral success is about shaping and activating voters’ networks of association — bundles of thoughts, feelings, sounds, and images that become linked in the brain. Political campaigns are about activating and shaping networks through stories and images.”

Will the spot succeed? For it to work, there needs to be an existing network of imprints about Boxer that can be stimulated by the imagery we’re seeing. You need to connect with a fundamental impression to be able to amplify and harness it. I don’t think that’s the case here.

Yes, Boxer is seen as a dogmatic liberal, a big spender, and somewhat self-righteous. But the commercial pushes too far past the boundaries of Boxer’s perceptual map. Voters just won’t emotionally accept the argument that the economic wreckage they see around them is “Barbara Boxer’s California.” They recognize, on some equally deep level, that the responsibility for California’s condition is spread wide. The exaggeration doesn’t fit the crime.

By contrast, Boxer’s new spot is positively chirpy, with upbeat music and a string of her accomplishments, from veteran’s benefits to after-school centers to “fighting for new jobs.”

But the commercial is a dud. Just as Fiorina overstates Boxer’s culpability, this spot feels blithely detached from the immediate and profound crisis California is facing. What Senator couldn’t dredge up and string together a few one-off accomplishments after decades in the Senate?

Boxer’s previous spot, vilifying Fiorina for layoffs and shipping jobs offshore when she ran HP, were negative but far more effective, because they tapped into another set of neural circuits – that Fiorina is cold and calculating.