Elizabeth Warren at work? The president rejects a bill that might help banks escape charges of foreclosure fraud 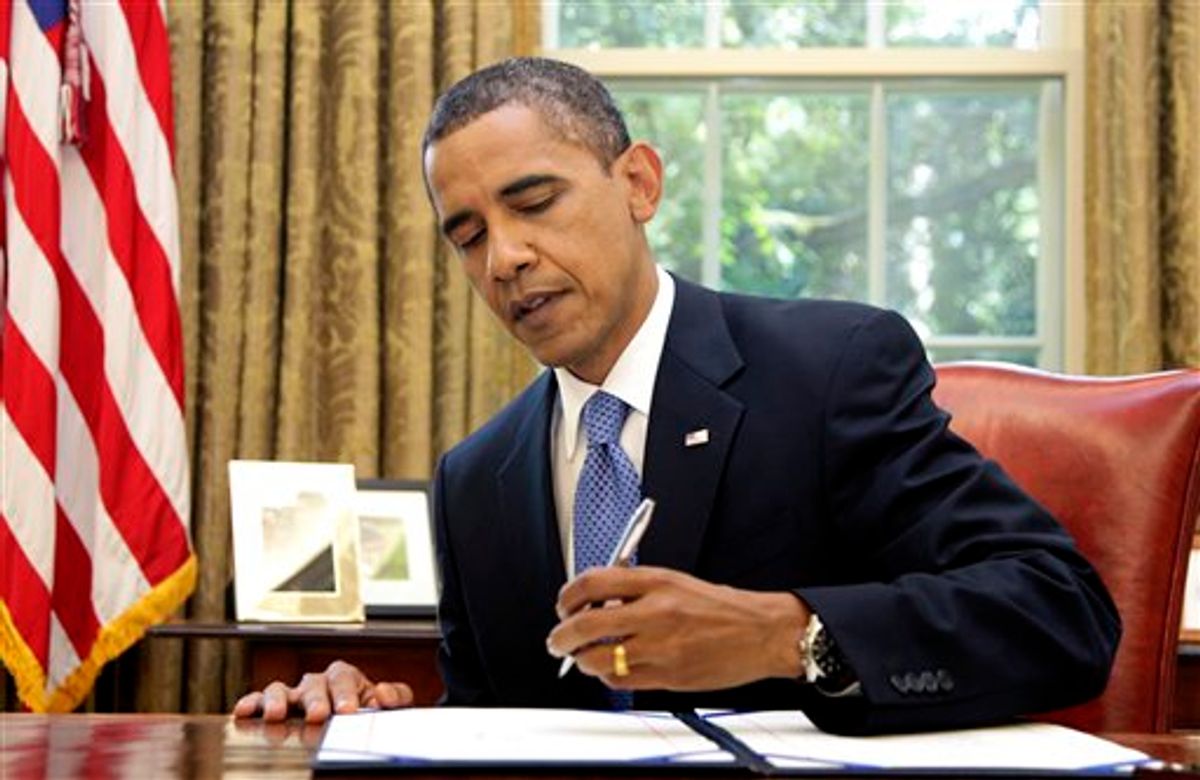 No, you can't! President Obama announced his first veto on Thursday. He will not sign the "Interstate Recognition of Notarizations Act of 2010." In case you haven't been following the progress of this obscure bill, its main purpose is to remove impediments to interstate commerce by requiring states and federal courts to accept notarizations by notary publics from any state. Currently many states only recognize notarizations by notary publics who are residents of the state in question.

The House passed the bill a couple of times, but it has languished repeatedly in the Senate, until it mysteriously zipped through via "unanimous consent" on September 27 -- the last day of the most recent Senate session. Mysterious because it just so happens that the country is currently in the middle of a major, and growing, scandal involving improper documentation associated with foreclosures. In thousands upon thousands of cases, executives at mortgage servicers were "robo-signing" foreclosure documents without actually reviewing the paperwork. Those documents were then shipped off to notaries who simply took it on faith that the facts attested to by the documentation were correct. Critics of the bill believe that, behind the scenes, banks and mortgage lenders pressured their allies in the Senate to pass the notarization bill in the hope that it might provide some ex post facto protection for them from the avalanche of law suits that is about to pound the mortgage industry.

That may or may not be true. The House member who originally authored the bill says his bill has nothing to do foreclosure documentation, and he's probably telling the truth, considering he originally proposed the bill years before the foreclosure scandal broke. But the sudden interest of the Senate has raised suspicions. The Obama administration, urged on by liberal bloggers, is taking no chances.

From the WhiteHouse.gov blog: (Note the words in bold!)

The Interstate Recognition of Notarizations Act of 2010 was designed to remove impediments to interstate commerce. While we share this goal, we believe it is necessary to have further deliberations about the intended and unintended impact of this bill on consumer protections, including those for mortgages, before this bill can be finalized.

Notarizations are important for a large range of documents, including financial documents. As the President has made clear, consumer financial protections are incredibly important, and he has made this one of his top priorities, including signing into law the strongest consumer protections in history in the Wall Street Reform and Consumer Protection Act. That is why we need to think through the intended and unintended consequences of this bill on consumer protections, especially in light of the recent developments with mortgage processors.

This is pure speculation -- but what we appear to be seeing here is the Obama administration pushing back against something that the banking industry wants and that Congress has rubber-stamped in a sudden hurry. And the White House is using the importance of consumer protection as the excuse. Sounds to me like Elizabeth Warren is already having an influence on White House policy. If so, that's worth a cheer, or two.