"Fringe" recap: A break in the Pattern? 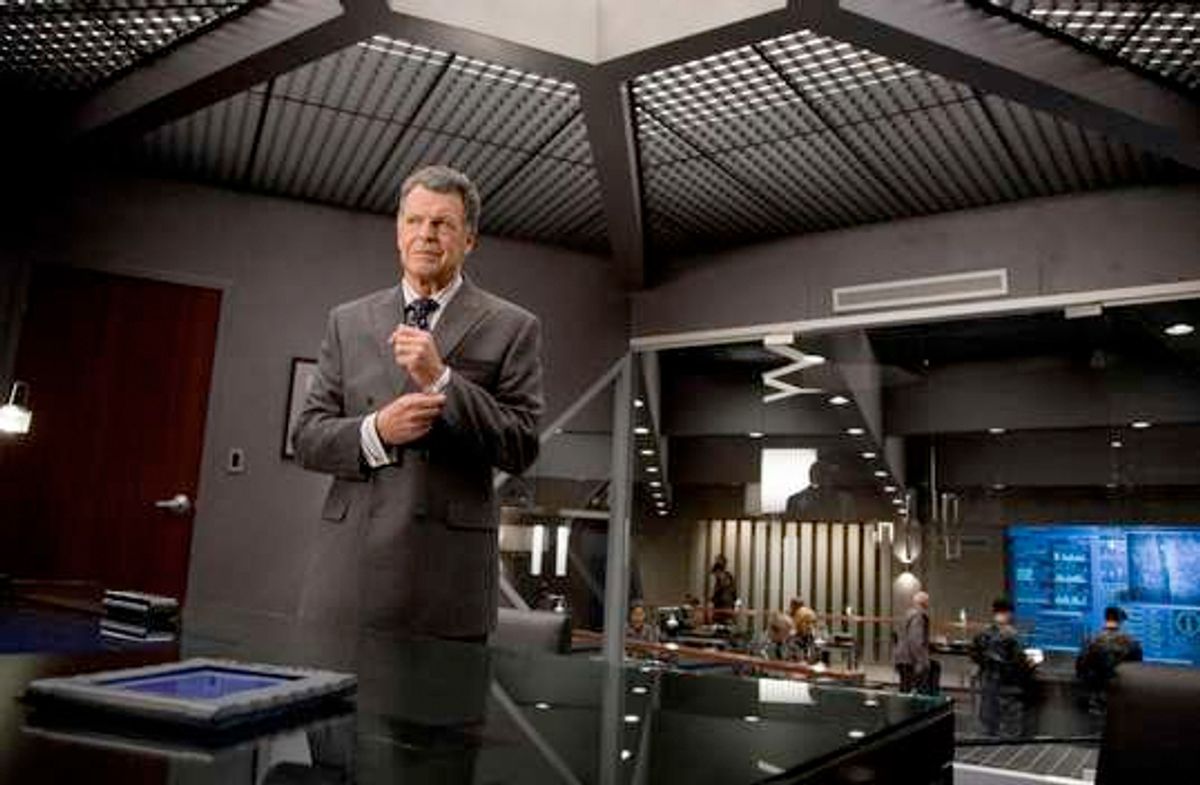 The red hued credits of "Fringe" welcome us to back to Earth-2, where ballpoint pens are rare collectible items, the Aruba war is still fresh in people's minds, and avocados are worth their weight in gold.

This week's episode features a Monster of the Week style storyline involving a Fringe suspect named Milo, whose medically-induced prognostication powers allow him to make seemingly insignificant occurrences cause murderous chains of events. The opening scene demonstrates this ability, as Milo drops a pen, which attracts the attention of a man nearby who goes to pick up the pen, putting him into the path of a bike messenger who swerves and crashes. The spectacle then distracts a passing bus driver long enough that he accidentally runs a red light, plowing over a female pedestrian (Milo's intended victim all along) in a horrifically realistic manner. Milo smiles creepily and heads off as the credits roll.

This week Olivia is still under the impression that she's Alt-livia, which is to say that she is acting like a fun and pleasant co-worker while going about her day at Fringe Division. Broyles and Walternate know the truth, however, and as they watch Olivia through the glass of Walternate's office, Broyles grouses about having a fake version of his agent hanging around. Walternate patiently explains that Olivia can travel between dimensions without damaging herself, and that if they can convince her that she's Alt-livia then she'll be more likely to submit to the series of nefarious experiments Walternate has planned for her. Broyles admits that that would be a handy power to figure out. He also talks earnestly about having the ability to defend themselves against Earth-1 -- another nice touch that explains that while Earth-2 Fringe agents might be super intense and willing to cross some ethical lines, they really do seem to believe that they are the "good guys" in this scenario.

There's some more chatter and... I'm sorry, but honestly Lance Reddick is rocking this tight black t-shirt. The man has zero body fat and a triangle-shaped upper torso, and it's all just very distracting. Go rent "The Wire" and enjoy the uncensored HBO version of what Lance Reddick brings to the table, folks. Meanwhile, I applaud Earth-2 Fringe Division's commitment to tight fitting t-shirts and sensible cargo pants.

Anyway, Agent Lincoln Lee is back again, and looking slightly less scaly this week. While he and Charlie help work the bus accident scene, Olivia is momentarily distracted by visions of Peter in his adorable pea coat. The Fringe team discovers the pen used by Milo, and realize that it's a significant clue. They head back to the lab to check in with the Earth-2's Asperger's Syndrome version of Astrid.

Earth-2's version of Charlie is much more savvy than Earth-1's Charlie (which is probably why he's alive while original Charlie is not) and he correctly hypothesizes to Lincoln that perhaps the woman before them is really the Earth-1 Olivia, and not their own Alt-livia. Lincoln dismisses that idea, and he and Charlie spar over who knows and loves Alt-livia better. These shenanigans are interrupted by word of another bus accident.

After narrowly missing Milo at the crime scene (he escapes thanks to his ability), the team eventually tracks down his origin story. Milo was mentally handicapped, and had been undergoing experimental drug trials to increase his cognitive ability. Even though one dose of the drug made him able to memorize Pi to a thousand digits, the doctors decided it would be a good idea to give him four more doses before attempting to revert him to his original mental ability at around an IQ of 54. Milo thought better of that, and began using his abilities to kill the people in charge of the drug trials so that they couldn't take his abilities away. It's very reminiscent of "Flowers for Algernon," right up to the tragic conclusion of Milo/Charlie Gordon's story.

Olivia and Charlie get back on Milo's trail, but he's hunting them at the same time. The team attempts to outsmart Milo, drawing on Astrid's help to decide whether or not to follow a clue that might have been left behind to lure them into a trap. Astrid gets into a logic loop that invokes Wallace Shawn's famous rant in "The Princess Bride" about which cup has the lidocaine powder. They decide to take the bait and follow Milo.

Milo has predicted this of course and knows that a series of events will occur culminating in Olivia being crushed to death under a pile of cinder blocks. What he fails to predict, however, is that the Olivia that is chasing him is slightly out of sync with the world, and because Olivia fails to pull a key memory from Alt-livia's knowledge bank (specifically, that one should stop to get a respirator when entering particular toxic zones), she breaks the pattern and manages to apprehend him.

The episode ends with Milo locked away in a facility. While he gets his wish to hold onto his new found mental abilities, it's a hollow victory, as his brain power increases to a point where he can no longer process the base physical world around him, and he is unable to relate to (or even perceive) his beloved younger sister beside him. Meanwhile, Olivia is dealing with some mental tweaks of her own, as she's once again visited by a vision of Peter, who kisses her and reminds her to hold on to who she really is. That sound you just heard? That was all the fun getting sucked out of the room, as Olivia's smile fades away and that old familiar sourpuss expression emerges. Which can only mean one thing: Olivia is back, baby!

This week's episode was another solid, if not spectacular, effort. While Milo was a one-shot villain this week (albeit a very creepy and effective one), his storyline does tie into the larger themes that the show has been exploring for some time. The show began in the very first episode with the idea that seemingly random strange events tied into a larger Pattern (with a capital "P"). Similarly, the Fringe agents use patterns in their day to day work as detectives to spot anomalies in crime scenes and to predict how suspects might behave. This is exactly what Milo can do, but he takes it to the extreme due to his medically enhanced ability. The fact that he has this ability only because Earth-2 scientists crossed a line with their medical experimentation also echoes back to last week's episode, where we saw Earth-1's Walter struggling with the temptation to use science to cross boundaries that perhaps shouldn't be crossed. Milo's fate is a reminder that the other characters should be careful what they wish for.

Speaking of recurring motifs and uncomfortable applications of science, one of the final scenes between Walternate and Brandon the scientist reveals that we the viewers are about to see a familiar pattern: the infamous immersion tank that featured so heavily in the first part of season one. Hooray!