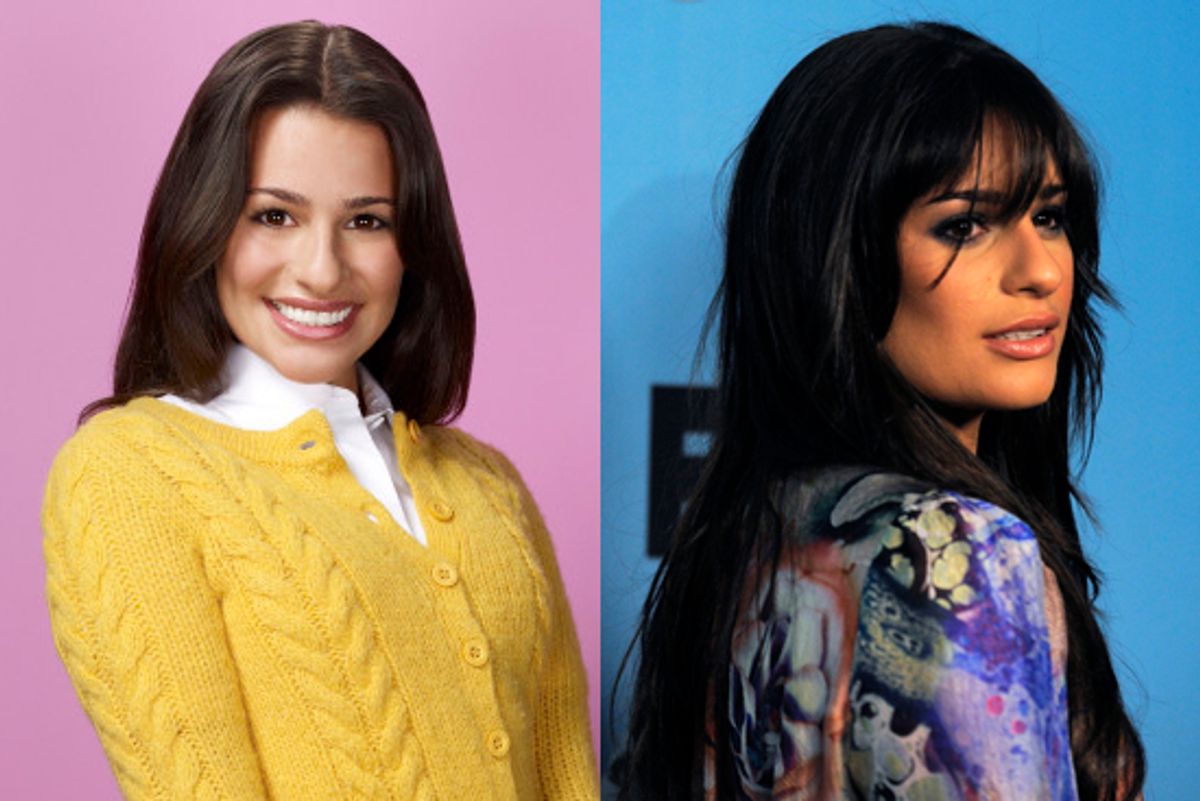 When I first watched "Glee," I felt giddy. Unabashedly expressive, darkly humorous. It was an earnest program with a heart. And yes, I'm talking in past tense. The Hollywood machine ate the show for brunch and bulimically purged it into the pretty mess we now have before us.

Don't get me wrong -- I still watch "Glee." It features fine writing, fun characters and strong talent. It just got all glossy and perfect on me. And nowhere is this more apparent than with our darling Rachel, played by Lea Michele.

Rachel is the centerpiece of the show. More than an amazing, almost Streisand-level singer, her acting is endearing and accessible, which is no easy feat, since she plays an annoying character: self-serving, narcissistic and occasionally ruthless. But somehow she pulls it off. Or did.

Apparently, they replaced her with another slimmed-down, super-polished Hollywood starlet, who looks like yet another machine-made actress, and just doesn't have the same effect on me. Consider the person who sang "Don't Rain on My Parade" in the first season:

Now compare her with the slip of an actress who posed topless in Marie Claire recently.

Listen, I understand the game: She's in Hollywood, keeping up with her flying star and getting in touch with her "vegan" side. (Back in the day, we used to call it an "eating disorder" -- now you can hide behind the healthier guise of "veganism" to slim down without all that stigma.)

And I don't really know if she has an eating disorder (though I think once you hit the borders of L.A., one is bestowed upon you, whether you like it or not). But why couldn't they leave well enough alone? Now, Rachel looks like a prepubescent stickling on the show. Her warm and inviting face has turned Hollywood hollow.

And, of course, like every other female actress, she only has one "stylistic" choice to make: sex up or get out.

When I see so many pouty, preening female celebrities, I wonder if they ever feel silly, playing up sex appeal to almost comical levels. It's as if they've been trained to be on the constant verge of an orgasm. That's got to be painful to maintain. Come on, already.

Hustler-style "sexiness" is de rigueur. Physical imperfection won't be tolerated. The machine is churning, keeping us all on the run, literally. If women remain in a constant, agitated state of insecurity, they're too busy "fixing" themselves to find their real voice.

Rachel was my secret TV heroine. She was supposed to be larger than life, not waiflike. I looked up to her, in that fictional, far-off sense. Rachel wouldn't have succumbed to this Hollywood assembly-line pressure.

Or perhaps she would have; Rachel is driven to succeed at all costs. If that's the case, I'll choose to remember Rachel before she made it big and got small.

But if she gets a nose job, I'm so outta here.