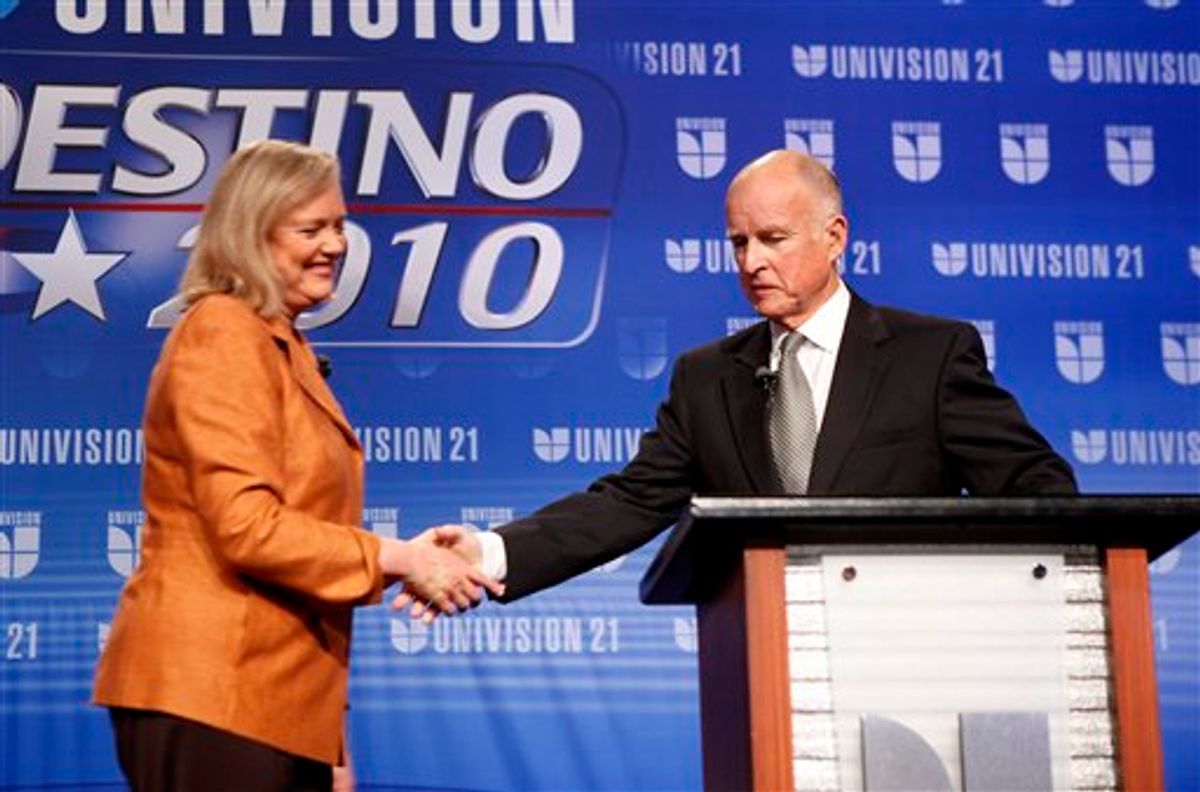 Since it was revealed that she employed an illegal immigrant as her family's housekeeper for nine years, Meg Whitman and her campaign have desperately been trying to change the subject -- ideally to something that frames her opponent in California's gubernatorial race, Jerry Brown, in an unfriendly light.

So you can understand why the Whitman campaign is cranking up the outrage over a choppy, semi-audible voice-mail message that captured an unwitting Brown, thinking he had already hung up the phone after a conversation with a police union official, talking frankly with  campaign aides. Brown, at least from what can be discerned from the recording, was  fearful that Whitman had cut some kind of deal with the union for support, apparently over pensions, and suggests to his aides putting an ad out that touts his unwillingness to make a deal with the union.

"What about saying she’s a whore?" someone asks.

The voice mail was released by the union to the Los Angeles Times, and now Whitman's campaign is scrambling to claim the moral high ground. "The use of the term 'whore' is an insult to both Meg Whitman and to the women of California," the campaign's spokesman said. "This is an appalling and unforgivable smear against Meg Whitman. At the very least Mr. Brown tacitly approved this despicable slur and he himself may have used the term at least once on this recording."

Well, that's how they'd like this to be portrayed, at least. But it's clear that Brown himself didn't use the word "whore" and that it was used to describe a backroom political deal, not as a random put-down of Whitman. And when you compare this to other instances in which politicians' unguarded moments have been caught on tape, it seems particularly mild.

Most recently, for instance, there was Gordon Brown expressing contempt for a "bigoted" woman he had just faked politeness in front of as he was driven off in his official vehicle, unaware that he was wearing a live microphone. Brown's Labour Party might have been doomed anyway, but the episode seemed to hasten its demise. In the United States, we've had Dick Cheney telling Sen. Patrick Leahy to "go f--- yourself" in 2004 and George W. Bush muttering to Cheney (as the two waved at the crowd) that Adam Clymer, then a reporter for the New York Times, was "a major league asshole." And there was George H.W. Bush, ranting and raving after a contentious on-air exchange with Dan Rather in 1988 that "Dan makes Lesley Stahl look like a pussy."

Bill Clinton had his moments, too. It was bad enough in 1992 when Gennifer Flowers stepped forward to allege a 12-year affair with the then-Arkansas governor. But things got worse when the audio recordings of their phone conversations that she released included this exchange about Mario Cuomo:

Flowers: "I wouldn't be surprised if he didn't have some Mafioso major connections."

But Clinton didn't seem to learn his lesson. A month later, he was huddling with his staffers at a television studio when he received word (false, as it turned out) that Jesse Jackson had decided to endorse Tom Harkin, one of Clinton's primary rivals. ''It's an outrage!" Clinton exploded. "It's a dirty, double-crossing, back-stabbing thing to do.'' The outburst was caught on tape and quickly became part of a negative ad by Paul Tsongas, another Clinton foe, in the run-up to the Georgia primary.

Say what you will about all of these episodes, but they're each a lot more interesting than Brown's "whore" exchange with his aides.