Now it's official: Obama is another Reagan 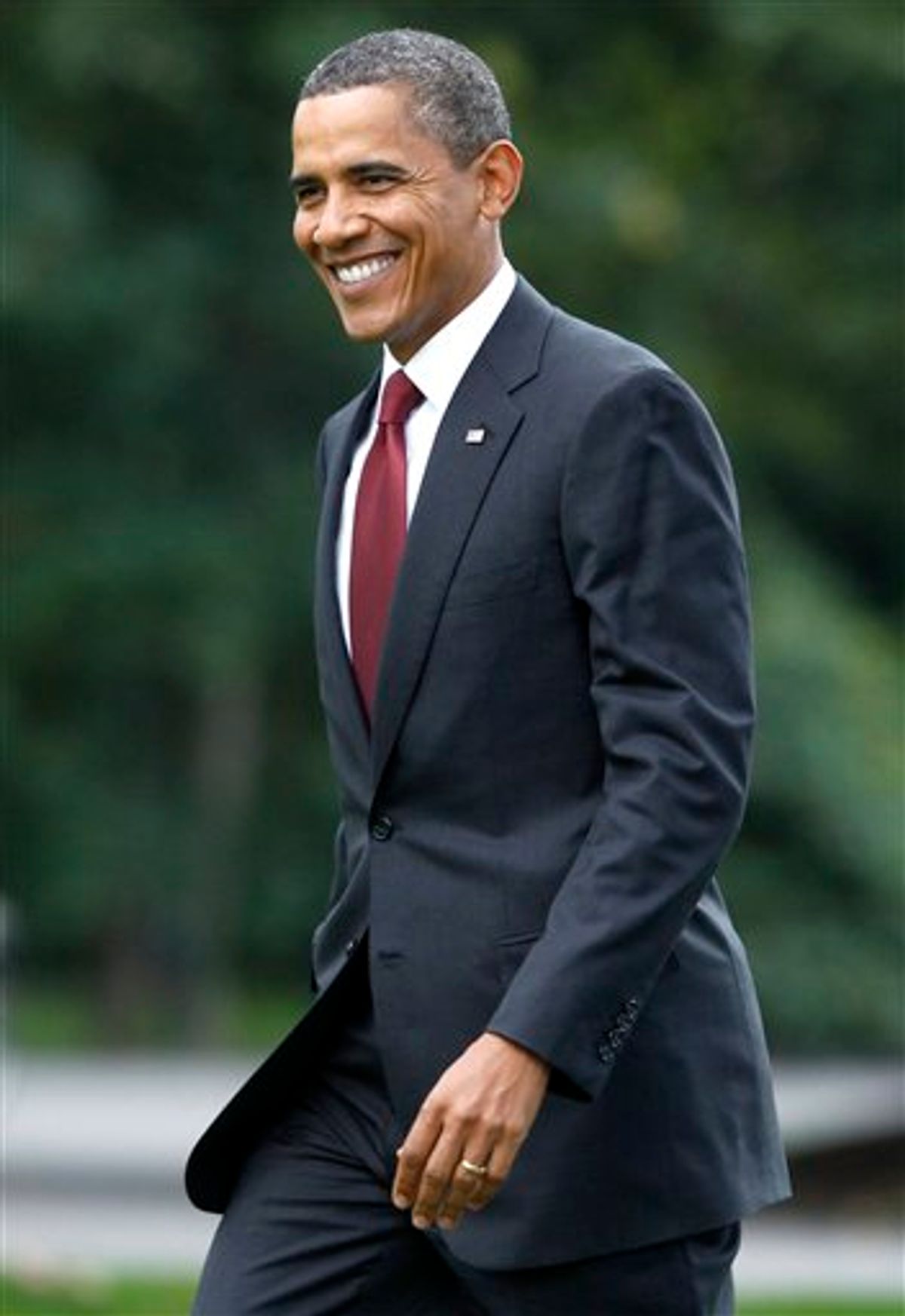 President Barack Obama walks on the South Lawn of the White House in Washington, Wednesday, Oct. 6, 2010, to board Marine One helicopter as he travels to Newark, N.J. (AP Photo/Charles Dharapak) (AP)
--

The monthly jobs report released this morning should pretty much seal Democrats' midterm election fate. There will be no more reports between now and November 2, so today's data essentially represents the final pre-election word on the status of the American economy. And as my colleague Andrew Leonard wrote earlier, the combination of 9.6 percent unemployment, paltry private sector growth, and alarming layoffs at the state and local government levels (the result of federal austerity) means that "the incumbent party is going to pay the price in a few weeks."

Today's report immediately calls to mind the final pre-election data before the first midterm of Ronald Reagan's presidency, which was released in the first week of October 1982. I've long argued that Reagan's first two years in office provide a nice parallel to Obama's. Both men came to office under similar circumstances and both initially enjoyed stratospheric popularity, with most Americans badly wanting to believe that their new president could and would fix their woes. In this sense, the "stunning" decline in Obama's political standing these past 20 months is no surprise at all. The same thing happened to Reagan, and for the same reason: a seemingly intractable recession that raised economic anxiety to levels not seen in decades. It didn't matter that Reagan tried to turn on his charm and reassure Americans with promises that his program would soon turn the tide. As unemployment climbed, voters tuned him out.

For Reagan, the final nail in his party's midterm coffin came with the final pre-election unemployment report, which showed -- for the first time since the Great Depression -- joblessness reaching over 10 percent. He tried mightily to put a positive spin on the data (noting, for instance, that the economy was showing positive growth), but almost no one in the media or the general public was willing to buy in. It's jarring, in fact, to go back and read the coverage that surrounded the release of that '82 jobs report; the same dispiriting conclusions that experts are now drawing about why this recession is so different (and worse) than previous recessions were drawn back then, too. Consider this passage from a New York Times story in early October '82; tweak a few names and numbers, and it could just as easily be written today:

The Reagan recession, in fact, has begun to shatter the almost blind faith among economists and many others that this recession, like its forebears, will inevitably be followed by recovery. Despite official data showing two quarters of modest growth -not the four quarters President Reagan heralded Tuesday night - the economy has failed to spurt ahead as many had anticipated it would by now.

Furthermore, there has been a relentless stream of negative economic indicators in recent weeks -from ballooning auto inventories to rising initial claims for unemployment insurance to the disappointing decline in the Government's index of leading indicators for August, which reversed a four-month climb. And it is widely expected that, within days, the Labor Department will report that unemployment has risen to 10 percent - a mark unequaled since the Great Depression.

Even more ominous to some are the growing doubts about whether the mechanisms of economic recovery will - or can - operate as they have in other postwar business cycles. Some economists fear that financial illiquidity, both in the United States and around the world, and the Administration's continued determination to stick to its current economic policies, could hinder, or even prevent, recovery from taking place.

''What's different this time from other postwar business cycles is that usually Government policies are aimed at supporting recovery, and this time they are not,'' said Jeffrey Sachs, an assistant professor of economics at Harvard University.

That was the environment that caused Reagan's party to suffer a drubbing in the next month's midterm elections -- a drubbing that was immediately followed by months of speculation about whether Reagan would decide not to run again in 1984 (and whether he'd be challenged in the GOP primaries if he did).

No one was expecting any miracles in today's jobs report. The numbers merely confirm what most voters and most in the media concluded long ago about the state of the economy and the nature of this recession. In that sense, today's data simply confirms that Obama and the Democrats are on course to suffer a 1982-like drubbing -- and to be plagued for weeks, or maybe even months, afterward with gloomy chatter about 2012.