Hold off on those cheers. Investors believe the economy is so bad, the Fed will be forced to do something 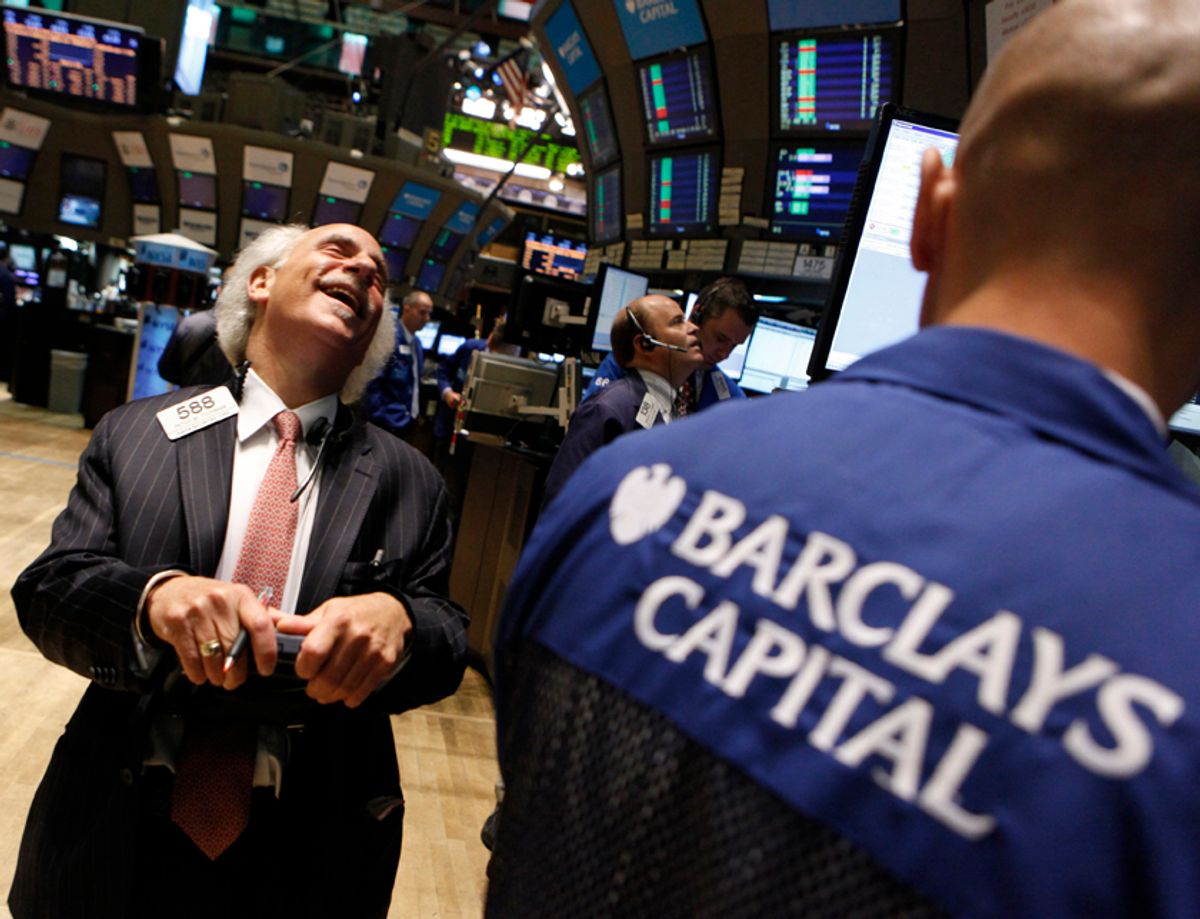 Trader Peter Tuchman shares a laugh with a specialist trader from Barclays Capital on the floor of the New York Stock Exchange June 11, 2010. U.S. stocks rose in a late rally on Friday as a strong forecast from a chip maker lifted tech shares and helped alleviate concerns about the economy's health after an unexpected drop in retail sales. REUTERS/Brendan McDermid (UNITED STATES - Tags: BUSINESS IMAGES OF THE DAY) (Â© Brendan Mcdermid / Reuters)
--

The Dow Jones Industrial Average closed over 11,000 on Friday, the first time the index has reached such dizzying heights since May 3. But with the major economic news of the day coming in the form of a deeply unsatisfying labor report, one might well ask, huh? In recent months, investors have tended toward extreme skittishness at every negative economic indicator blip. But not this time.

The consensus explanation mooted by the econoblogosphere does little to build confidence: The theory is that investors believe the latest data is incontrovertibly bad enough to convince the Fed to attempt to juice the economy with a second round of "quantitative easing."

Quantitative easing is basically a fancy way to describe a pretty simple strategy. The Fed will use its powers to create money that it will use to buy Treasuries and securities. The hope is that banks and other financial institutions will then turn around and deploy the cash generated from selling their Treasuries at work in the real economy -- as loans or investment capital. NPR's "Planet Money" offers a simple explanation here. How the World Works commented on a previous round of QE here.

Will it work? Mark Thoma is skeptical and gloomy:

I expect this will help the Fed move to a second round of quantitative easing, so I do expect something from the monetary policy authorities, though not enough. Instead of shock and awe, we are likely to get incrementalism, but incremental expansion of the Fed's balance sheet is unlikely to provide enough help. Fiscal policy could help, particularly if the plans for a new infrastructure spending were in place already, but there are no plans presently, and more help is unlikely. If we see anything from fiscal policy, it won't be until after the election, and if Republicans take over the House or the Senate the best we can hope for is more tax cuts. But tax cuts have not been very effective to date (they were 40 percent of the stimulus package), and, except for their balance sheet rebuilding properties, they would be unlikely to do much now.

So, if the stock market movements are, in fact, due to optimism about help from policymakers, then it's an optimism I don't share. Fiscal policymakers in particular have dropped the ball with respect to helping with employment, and it looks like we are stuck with the prospects of a very slow recovery. It didn't have to be that way, but overly cautious policy based upon overly optimistic hopes for recovery, and unfounded fears of deficits and inflation, have prevented the policymakers from taking the action needed to turn things around.