"Glee" could be great -- if it weren't so awful

The imaginative, off-kilter dramedy is back, and it's better -- and worse -- than ever 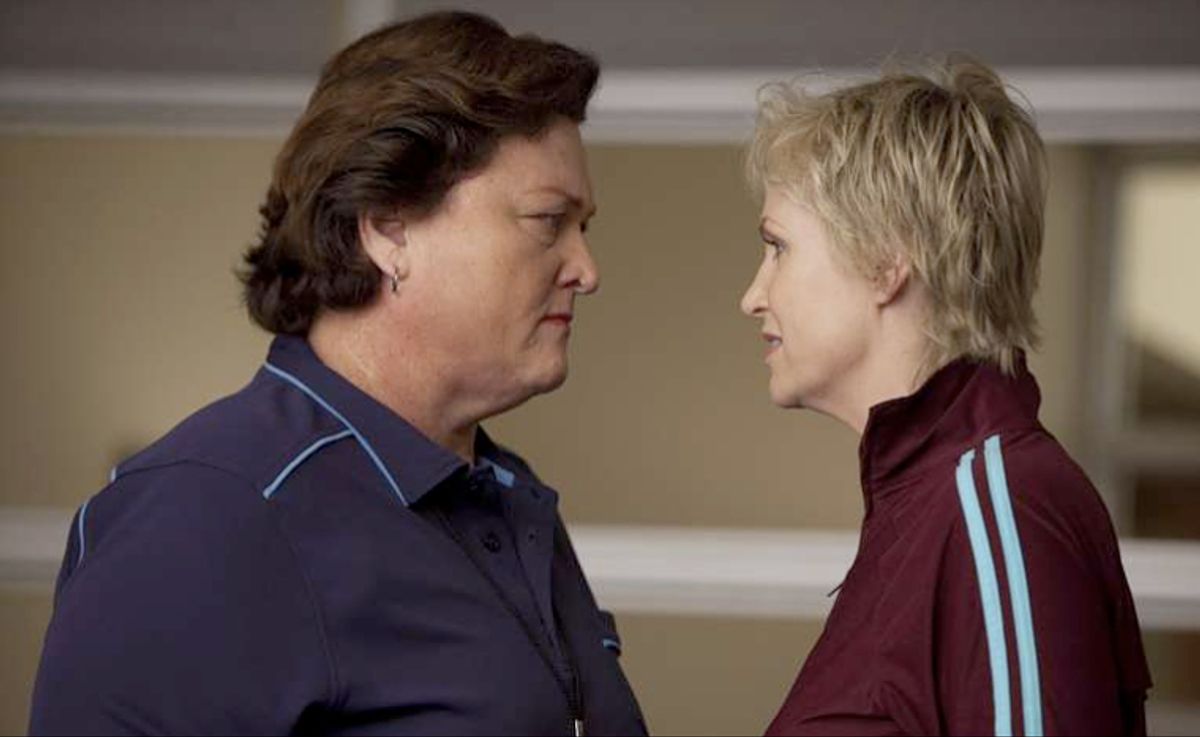 "Glee," who are you, to take these many forms? You delight one minute and disturb the next. You intoxicate us with she-man football coaches and grilled Cheesuses, then torture us with Afterschool Special fare about hurt feelings and religion and daddies on their deathbeds. You juggle snark and melodrama, raps and ballads, bisexual cheerleaders and earnest pillow-lipped quarterbacks with the restraint and grace of a cocaine-addled musical theater major trying to hold down a job as a host at Applebee's.

And look, we'd be more than happy to take our menus and smile politely through overzealous talk of 2-for-1 provolone-stuffed meatloaf and happy hour specials on Main Street 'Ritas, if it never segued into a warbling, slightly ironic rendition of Meatloaf's "I Could Do Anything for Love (But I Won't Do That)," followed by a rambling confession about the control issues that arise when a brand-new relationship goes sour faster than a Red Apple 'Rita.

Because, like that manic coke-fueled host, "Glee," you're just too deliriously strange and disturbed for us to look away. We know that you're smart and talented and you have a good heart down deep inside, even if you use too many amateur therapy terms and gag-reflex-inciting Barbra Streisand ballads to show it. But seriously, "Glee," snap out of it. Every single song doesn't have to build to a fever pitch in under 33 seconds. Rachel Berry (Lea Michele) doesn't have to dress like a Skipper doll. And we don't need a forum every week on religion or race or sexuality or whatever other modernized "Free to Be You and Me" moment you've dreamt up in the middle of the night, while besieged by delusions of grandeur about your enormous impact on the culture. Stop drinking your own Kool-Aid for long enough to realize that two nitrous-induced Britney Spears dance numbers in a row is exactly one too many. (The first one, by Brittany [Heather Morris], was awesome. The second, with Brittany and Santana [Naya Rivera], was weak, and stepped on the toes of the first.)

Has there ever been a TV show that's at once more delightful and cringe-inducing at the exact same time than "Glee"? Ever since it returned for its second season, this off-kilter dramedy (8 p.m. Tuesdays on Fox) has been nailing its high notes while still flaunting its many flaws with even more bravado than before. Coach Sue Sylvester (Jane Lynch) is funnier than ever this season, casting aside repetitive lines insulting Will Schuester's (Matthew Morrison) hair with some slightly more creative zingers. ("Seriously, you wear more vests than the cast of 'Blossom.'") Her welcoming embrace of the new football coach was particularly memorable ("I'm sure you're used to hillbilly parents yelping adulation at you as they attempt to impregnate the tail pipes of various off-road vehicles, but you're in my house now, Biest"), as were her consoling remarks to Kurt (Chris Colfer) when his father had a heart attack last week ("I'm sorry for what you're going through, lady. I wouldn't wish it on my worst enemy. And I guess I don't have to, I think Mary Lou Retton is like an orphan or something").

Brittany (Morris) has also come into her own this season with the aforementioned hallucinated performance of Britney Spears' "I'm a Slave 4 U" and some truly memorable dim-bulb remarks. She almost single-handedly saved a weepy nightmare episode of "Glee" last week when she gave Kurt a school report she wrote on heart attacks (in case his father's doctor wanted to read it), then she told the other kids, "I made him a card that says that heart attacks are just from loving too much." But almost every character has had a few great moments this season, from Will pathetically proclaiming "Sailing" by Christopher Cross "my jam!" to Principal Figgins' (Iqbal Theba) absurd introduction at the school assembly ("Fresh off the last-place finish at the regionals, please give it up for the New Directions!")

Strange, then, that just when the mean-spirited, oddball humor of "Glee" is firing on all pistons, the dramatic dialogue remains utterly tone-deaf. About 40 minutes into each episode, three or four characters suddenly stand up in front of the classroom (or the school assembly, or the church) and announce their true feelings to a crowd. "I'd like to dedicate this song to my boyfriend Finn. I was wrong, I shouldn't try to control you," Rachel tells everyone in New Directions (instead of just texting Finn like a normal teenager). "I've just, I've never been this happy before, and I realize that I was trying to hold on to how you were making me feel so much that I was strangling you in my hands like a little bird. I get now that to get this relationship to work, I have to open up my hands and let you fly free." Once you clean the vomit off your shoes and you've had a minute to think about it, you'll realize that's a pretty touching message indeed.

And how many times will these characters explain to us that they're going to express themselves through song instead of words? Um, we're watching "Glee," OK? We fricking get it. And then, instead of just breaking out into song, they explain everything using words as well, words like "issues" and "this relationship" and references to being in this or that emotional "place." It's like a teenagers' Alcoholics Anonymous meeting where no one will sit down or shut up. "Mr. Shu, I've been struggling trying to figure out what I wanted to say to Kurt all day, and I realized I don't want to say it, I want to sing it," Mercedes (Amber Riley) announced last week. "This song is about being in a very dark place and turning to God. It's a spiritual song, Mr. Shu, is that OK?" Apparently Mercedes' plan is to send us all to a very dark place with her words, so that we'll be primed and ready to turn to God once she finally starts singing.

And then, right after the whole crazy circus falls on the rough road of psychobabble and lengthy performance preambles and hugging and learning, here comes Rachel Berry again to sing "Papa, Can You Hear Me?" or "Send in the Clowns" or "The Way We Were" or some other ballad that Barbra Streisand has already marked with her gigantic BABS branding iron. Yes, everybody loves Streisand -- or pretends to, so she doesn't eat our faces off or have us killed in our sleep or get us banished to break up rocks in Siberia -- but when Rachel conjures Streisand note for note, that's just about as entertaining as bad karaoke.

And look, there are other songs in the world besides the ones popularized by Streisand and "Dreamgirls." Why always the most obvious choices, people? Was Finn's (Cory Monteith) "Losing My Religion" really worth the effort? Why not dip into "Jesus Christ Superstar" instead? What about Cole Porter? Neil Diamond? For chrissakes, ABBA? I'm sure that anyone and everyone is begging to get onto the "Glee" gravy train these days, so why not branch out beyond the first song that springs to mind, or take a pass on the most melodramatic ballads in the history of balladry?

And let's be honest, Lea Michele is a problem, at least in this context. We can't watch this woman sing a ballad every single week. Yes, she has an amazing voice, the kind of voice that would be awe-inspiring to hear live. But the overproduced, overprocessed sound that "Glee" traffics in takes all of the warmth and freshness of Michele's voice and turns it into a Hostess cupcake, full of sugary, stale perfection. Every single one of her solos is glazed over with the same overamplified, crescendo-loving treatment, so that they're practically interchangeable. Since we can't hear anything organic or uncertain or pure in these vocal tracks, we're left to sit through the same shots of Lea Michele's face, enduring the same mournful eyes and pursed, heartbroken lips and crippling emotions she apparently faced last week and the week before that.

You know what proves that the sound mix could be a million times more emotionally affecting? Mercedes' numbers. Why? Because they're so often produced in the gospel style, with the sound of a blended group of gospel voices ringing out without being utterly overpolished or recorded in a vacuum. Listen to a group number by New Directions: It's mixed so you can hear the voices of individual stars, Rachel and Finn up front, Mercedes and Kurt second, etc. If they mixed New Directions numbers more like those gospel numbers, with voices that blend together as a group instead of each being souped up with that sweetening, glossy star treatment, then we could experience their sound as a whole and appreciate it as such. It would feel more exciting, more immediate -- more like a real show choir, in other words, not a roomful of battling vocalists. The Vocal Adrenaline numbers are treated this way, and that's why their performances on the show are always a little bit more mesmerizing than those of New Directions.

"Glee" is such an original, imaginative show with so much fun and absurdity packed into it. But the psychobabble, the instant-climax song arrangements, the public service announcement plotlines, the empty tear-jerking -- all of that amateur-hour fumbling needs to get gone.

Or, as a Rachel might put it, the "Glee" writers need to realize that they're trying to hold on to the joys of creating a hit show so much that they're strangling "Glee" in their hands like a little bird. To get this show to work, they have to open up their hands and let "Glee" fly free!