As Jimmy's girl endures a gruesome attack, Nucky is stuck between the woman he's with -- and the woman he wants 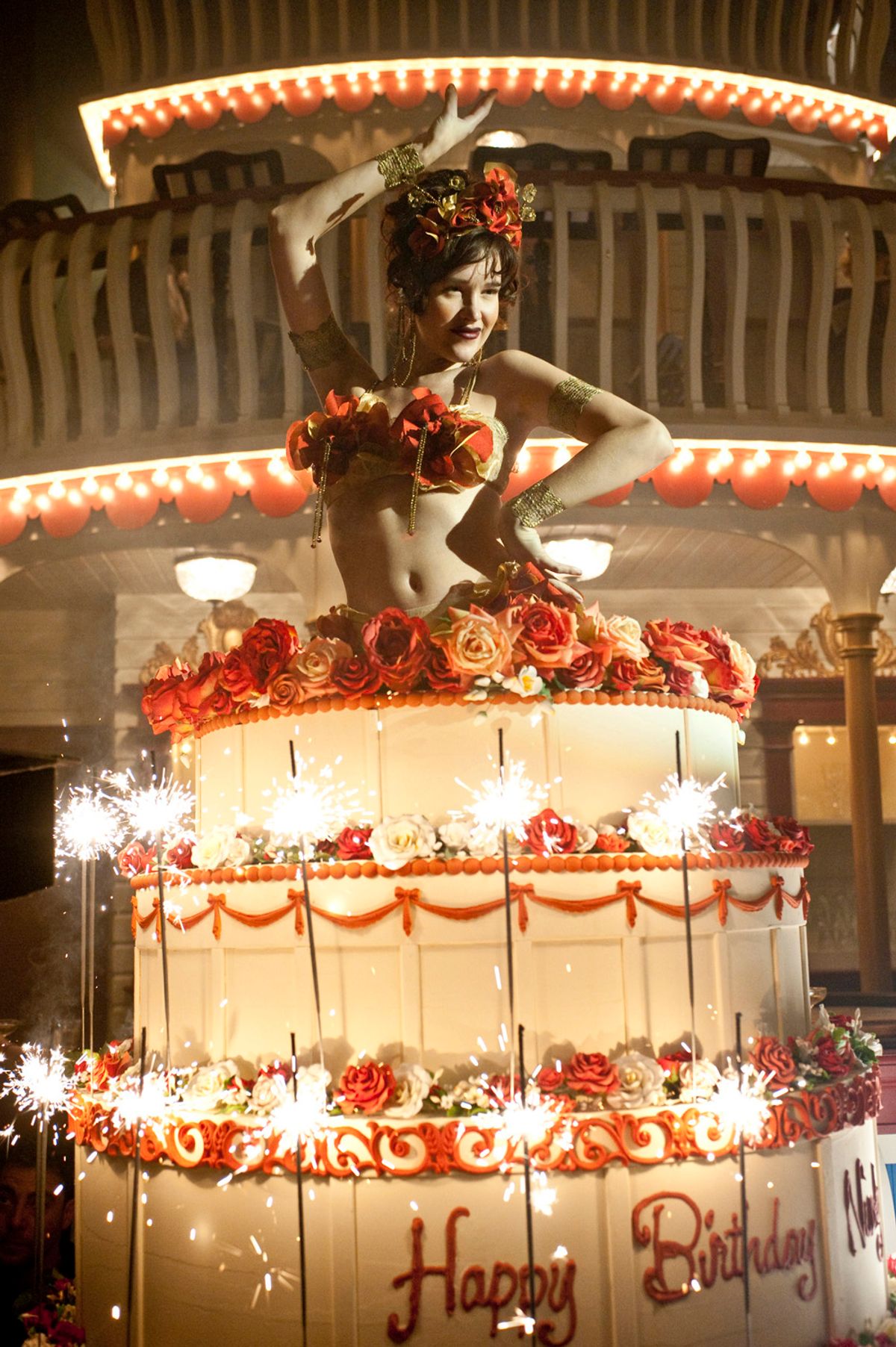 As Terence Winter's "Sopranos" colleague Matthew Weiner is fond of saying, "actions have consequences," and while it took four seasons for Don Draper to pay for his deceptions, Jimmy Darmody is no Don Draper. Only a few weeks after his ill-starred attempt at armed robbery, Jimmy has been forced to start over again in Chicago, as roving backup for the intemperate Al Capone. At this point in his career, Capone is a glorified bagman, shaking down bar owners for boss Johnny Torrio's protection racket. He's a fearsome character whose favorite move is to bring his heel down hard on his victim's face, but he doesn't understand there are adversaries he can't beat into submission.

That Jimmy has picked up a few things from his erstwhile mentor, Nucky Thompson, is clear in the way he attempts to finesse Al's pistols-drawn approach to rival gangster Charlie Sheridan (Frank Shattuck). The purpose of their meeting, before which Torrio pointedly clears the room, is to inform Sheridan that Torrio will be moving in on his territory, a point Al has already made by breaking the jaw of an unlucky bar owner. Just before Sheridan and his flunkies enter, Jimmy warns Al to start small, drawing on their common experience as soldiers -- "You don't take over a county all at once." But the moment Sheridan lets fly a crack about "you New York fellas," Al hits back. Johnny Torrio, "also from Brooklyn," is taking over Greektown, whether Sheridan likes it or not.

Sheridan, surprisingly, backs down, offering Torrio 25 percent of his takings, an amount Al spitefully ups to half. As Sheridan and his men file out, Al savors his victory, which confirms his low opinion of the Irish. They talk tough, he tells Jimmy, "but it's just the booze talking." (Not surprisingly, he has a higher opinion of Sicilians.) Jimmy, however, is more skeptical, and with good reason. During the meeting, Sheridan takes note of Jimmy's attachment to Pearl (Emily Meade), who plants a kiss on him as their meeting gets started. (Michael Pitt plays Jimmy's discomfort as a manifestation of both strategic unease and vestigial guilt; he may have walked out on Angela, but he doesn't want to flaunt his new relationship.) Sure enough, one of Torrio's men turns up at the whorehouse where Pearl works, asks for Jimmy's favorite girl, and proceeds (after screwing her, of course) to cut a deep gash across Pearl's face, disfiguring and possibly blinding her. When they attempt to visit her in the hospital, Al is typically brash and callous, comparing Pearl's incipient facial scar to his own; he doesn't care what destruction he leaves in his wake. Jimmy, meanwhile, is beginning to understand that he's come home from one war and waded straight into another, one with plenty of collateral damage.

Of course, not all the victims are quite so innocent. Back in Atlantic City, Sheriff Eli and Deputy No-Neck are on the hunt for whoever strung up one of Chalky White's men. Eli, and especially his meathead flunky, are reluctant to track down a black man's killer, but Nucky is a pragmatist first and foremost. He keeps Chalky happy, and Chalky tells the black community to vote for Nucky and his Republican cronies. "One hand washes the other, and both hands wash the face," Nucky explains.

And with that, the Ku Klux Klan make their first appearance en masse. Eli and deputy barge into a Klan meeting -- held in a church -- with shotguns drawn and remove the Grand Cyclops, also known as a local dry goods merchant. ("I bought linseed oil from him not three weeks ago," exclaims the deputy.) Eli may not care much for the black man one way or another, but he viscerally dislikes the Klan and wastes no opportunity to make the Cyclops' stay in custody as unpleasant as possible.

In a potent illustration that, in Atlantic City, money surpasses all other law, the Grand Cyclops is promptly delivered into the custody of Chalky White, who unleashes the longest monologue in "Boardwalk Empire" thus far. As the terrified Cyclops looks on, Chalky goes back to his childhood in Elgin, Texas, where his father was a skilled carpenter. He recalls staring with pride and fascination at the elegant bookcases his father crafted for a wealthy white man, and then, a few weeks later, how his father was hung by another group of whites. He lays his father's carving tools on the table, and proceeds to get to work.

As it turns out, not even removing the Cyclops' ring finger can make him confess knowledge of a crime he knows nothing about. As we might have suspected, the real culprit is the Italian gangsters to whom Chalky's predecessor, Mickey Doyle, is deep in debt, although they meant to kill Chalky himself and not a minor employee. Ironically, the Packard that Eli cites to Nucky as proof that Chalky is prospering from their arrangement is the same Mickey used to identify Chalky to his would-be killers. If he'd gotten the car himself rather than sending someone else to do it, it would have been his body hanging in the alley.

More unintended consequences: Lucky Luciano drops by Jimmy's home and asks for "Mrs. Darmody," but instead of Jimmy's wife, he gets his mother, who isn't even slightly fazed by Lucky's threatening talk. Instead of cowering, she suggests he look for Jimmy in an anatomically implausible location, an unexpected riposte that manages to pierce Lucky's tough outer shell. Like a lot of "Boardwalk Empire's" characters, he carefully manages the disjuncture between his public and private personae; last week, he let the mask slip when he confessed his troubles with impotence to his urologist, then just as quickly put it back up, superfluously threatening the man to keep quiet. But with Gillian, he's eager to be seen, waiting outside her burlesque performance until she shows. "You already know what I want," he tells her. Her response could serve as a motto for most of "Boardwalk Empire's" characters: "No, dear. I only know what I want."

This week's episode is titled "Anastasia," for the famous hoax in which a mental patient named Anna Anderson claimed to be the murdered daughter of the last Russian Tsar. (Although they've been sticklers for dates thus far, the writers play fast and loose this week: Anderson's hoax didn't become public until 1922.) Margaret Schroeder, an impoverished widow with a yearning for a better life, is enchanted by the possibility Anderson's story might be real, and crushed when it proves false. But by the end of the episode, she's pushing toward her own reinvention. At Nucky's "surprise" birthday party -- actually a massive bacchanal for his political allies, thrown by Nucky himself -- we see her sharp wit in action, deftly parrying the casual sexism of political powerhouses, including Sen. Walter Edge (Geoff Pierson) and the mayor of Jersey City (Chris Mulkey), as well as Nucky's mentor, the Commodore, who unearths his old League of Nations gambit. (Not surprisingly, Nucky's bubblehead mistress, Lucy, can only giggle in response, although she does deftly turn the issue into a plea for her "daddy" to take her to Paris.) Margaret Schroeder and Nucky take to the dance floor, and for the first time, there seem to be genuine romantic sparks, but then out rolls a giant cake with a scantily clad Lucy inside, and all eyes are on her.

As the episode closes, Margaret takes a step toward getting Nucky's full attention. She's leaving the boutique late, and as her boss distractedly makes notes in her ledger, Margaret discreetly slips a dress off the hanger and stuffs it in her purse. It's nothing much, a simple green shift, but the way anxiety turns to private triumph as she walks down the boardwalk, it's as if she's crossed her own personal Rubicon. That doing so involves her first venture into larceny says a lot about the terms on which "Boardwalk Empire's" characters define themselves.

Sam Adams writes for the Los Angeles Times, the Philadelphia Inquirer, the Onion A.V. Club and the Philadelphia City Paper. Follow him on Twitter at SamuelAAdams or at his blog, Breaking the Line.