Seized by inspiration, Don reinvents himself and SCDP, but the partners aren't impressed 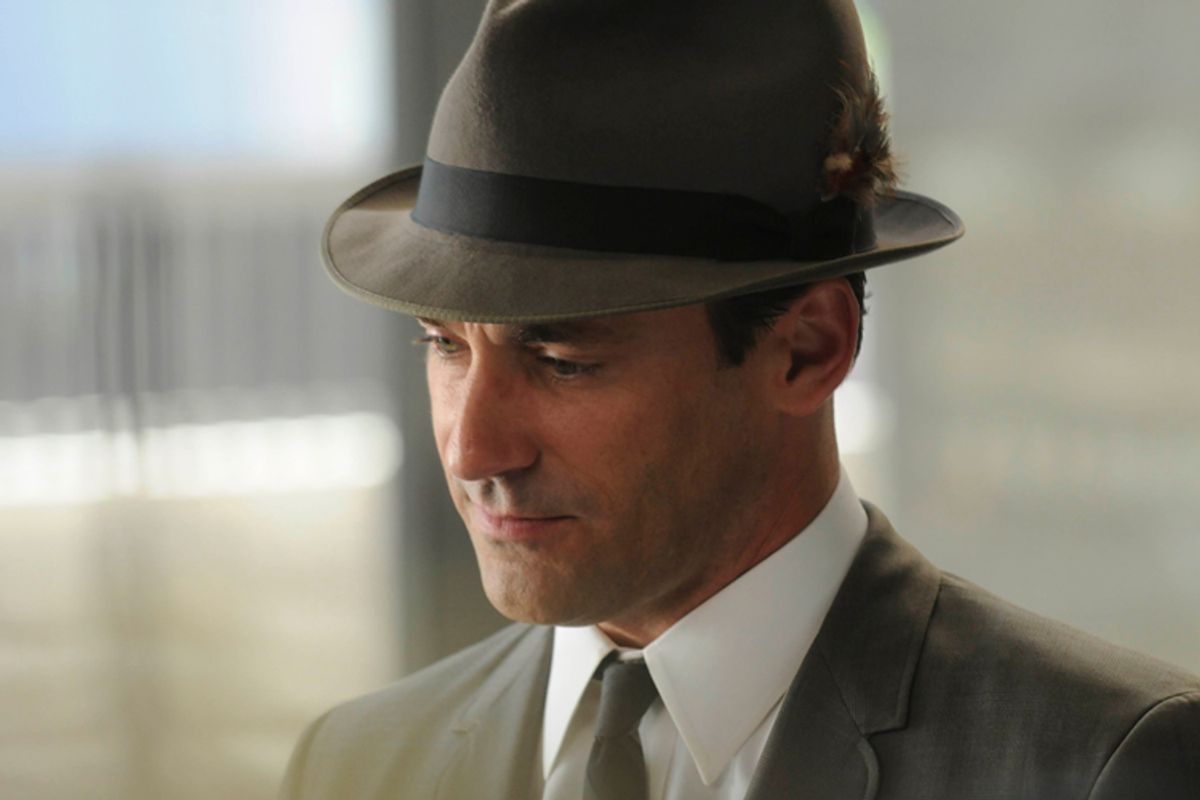 "We're gonna sit at our desks and keep typing while the walls fall down around us because we're creative, the least important, most important thing there is." In the penultimate episode of the fourth season of "Mad Men," Don is trying to be philosophical about the coming apocalypse, but we know this kind of learned helplessness isn't his style. While the other partners retreat to their own distinct survival modes -- Pete is strategic, Lane is all about minimizing the damage, Roger is all about ego and past grudges, and Burt Cooper is reserved and resigned -- Don looks uncertain of the best move. But what does Don always do when the going gets tough?

He re-creates himself. After crawling out of a deep, dark hole, Don resolves to reinvigorate himself and everyone around him, using only the powers of his imagination. Instead of seeing them as desperate whores with delusions of grandeur (like his poor dope addict ex, Midge), he imagines SCDP as a valiant crusader for all that is good in the world and stands up against "a product that never improves, causes illness and makes people unhappy."

It's a farce, of course, but no one knows better than Don that image is everything. The product that SCDP has to offer is exactly the same quality as it's ever been, but the perception is that the ship is sinking, so everyone wants to distance themselves. Nothing hurts Don's pride more than the feeling that he's perceived as desperate; it pushes his buttons, thanks to his roots as the dirt-poor bastard son of a whore (which itself sounds like an insult). This gives the Heinz executive's remark ("I bet I could get a date with your mother right now!") all the more sting.

"You're a certain kind of girl, and tobacco is your ideal boyfriend," the partners at SCDP are instructed, and once again Don is faced with his own desperation.

"We will listen more than we will speak," offers Burt Cooper gamely, but Don isn't all that invested in playing high-priced call girl to Philip Morris. And when Don sees Midge, transformed from the carefree, independent artist she was in the first season into a cynical addict, he recognizes that desperate whores have no leverage at all, no matter what they say. The only option is to shift the whole picture.

So Don uses his own awkward attempts at self-improvement -- his journal, the only thing that seemed to save him from ending up in the gutter like his ex -- as a means of "changing the conversation" about SCDP. Whether or not the partners think Don's full-page anti-tobacco ad is bold or just foolish, whether he's brought the office new hope or he really is a cynical, craven monster (as Burt Cooper puts it), Don's ability to reinvent himself and the world around him in his image is what saves him, time and time again. He turns to his own creative impulse -- the least important, most important thing there is -- to start down a new path.

Of course, Don and SCDP are hardly valiant. Like Sally, who has learned to say the right things to placate her mother, they're all just playing a part. Don chain smokes through the entire episode, scoffs at anyone who "doesn't get it," and, despite his ability to appear dedicated to Faye, seems likely to fall back into being coddled and cared for by Megan. Even when Don swims and writes and remains open to new experiences (including those that turn creepy, like his encounter with Midge), he rarely seems to make genuine progress. He may not be a monster, but even as he makes strides in the right direction, it's tough not to feel that ultimately, Don is a product that never improves, causes illness and makes people unhappy. Any indication that he might grow into someone with a higher purpose is just a song and dance he himself created to distract us from the truth.

So who makes more sense for Don: Megan, a woman who coos at everything he does, or Faye, a woman who appears to meet him as an equal, but who backs down and does whatever it takes to please him when push comes to shove? Does Faye know about Megan (as her comment about "your girl" seems to hint), and is she merely pretending not to know so she doesn't have to deal with the consequences? As dedicated to honesty as Faye appears on the surface, this is a woman who wore a fake wedding ring, who plays the smoothly conversant shrink/confidante to the consumer in order to help corporations sell more stuff. When Peggy tells Faye how much she admires her because she never compromises, Faye looks a little uncomfortable with how far from the truth Peggy's impression of her has strayed. "Is that what it looks like?" she asks, vaguely amused but undeniably bleak over just how much she's compromised lately. Faye doesn't even want to have a drink with Peggy, because it'll mean finding out just how effective her false advertising as an empowered woman is.

But the interaction also underscores a crucial difference between Don and Faye. Where Don laps up Megan's unfettered admiration and devotion, Faye has less interest in reaping the rewards of her deceptions. Her ego is less needy and less attached to "the stupid office" than Don's is. Like Sally, she just wants something real. But even as she becomes giddy at the thought of being out in the open about her relationship with Don, the whole thing becomes less exciting to him. Faye knows how to use illusions to get what she wants, but Don is an illusion -- beneath the surface, there's just more surface.

Saddest of all, though, is Sally, who just wants is to be treated with some respect, to be shown that she's not one of the little kids who can't think for herself. "Why don't Bobby and Jean eat first and I'll wait to eat with you and Henry?" she asks Betty, but her mother isn't capable of perceiving her as anything more than an inconvenience. All Betty has to offer Sally is a delay tactic ("Let me think about it") followed by another punishment ("Go to your room").

"She doesn't care what the truth is as long as I do what she says," Sally says of Betty, encapsulating the flaws of her mother's generation in a single line. The appearance of obedience is good enough for Betty, who is too wrapped up in her own worries to be pulled out of them by her daughter. With Dr. Edna, Betty doesn't really want to talk about Sally at all, she wants to talk about herself -- to a child psychiatrist.

The truth, though, is that Sally is as trapped as the girl on the Land o' Lakes box. She's on a box, holding a box with a picture of her on it, going on forever to the point where it makes Sally's head hurt. As long as you're just keeping up appearances, as Sally and Don and Faye are, you're forever trapped in a house of mirrors. When two mirrors face each other, reflecting only each other's needs, all you get is an infinite void. Children or adults, creative or not, the least important or the most important, it all boils down to how much of yourself you're willing to compromise just to survive. Is Midge compromising much more than Megan is? Will Peggy and Sally ever find respect, as long as they're asking for it? Is Don empowered or imprisoned by his own heroic impulses? Next week, the season finale should hold a few answers, but until then, Megan is right: It feels different around here.