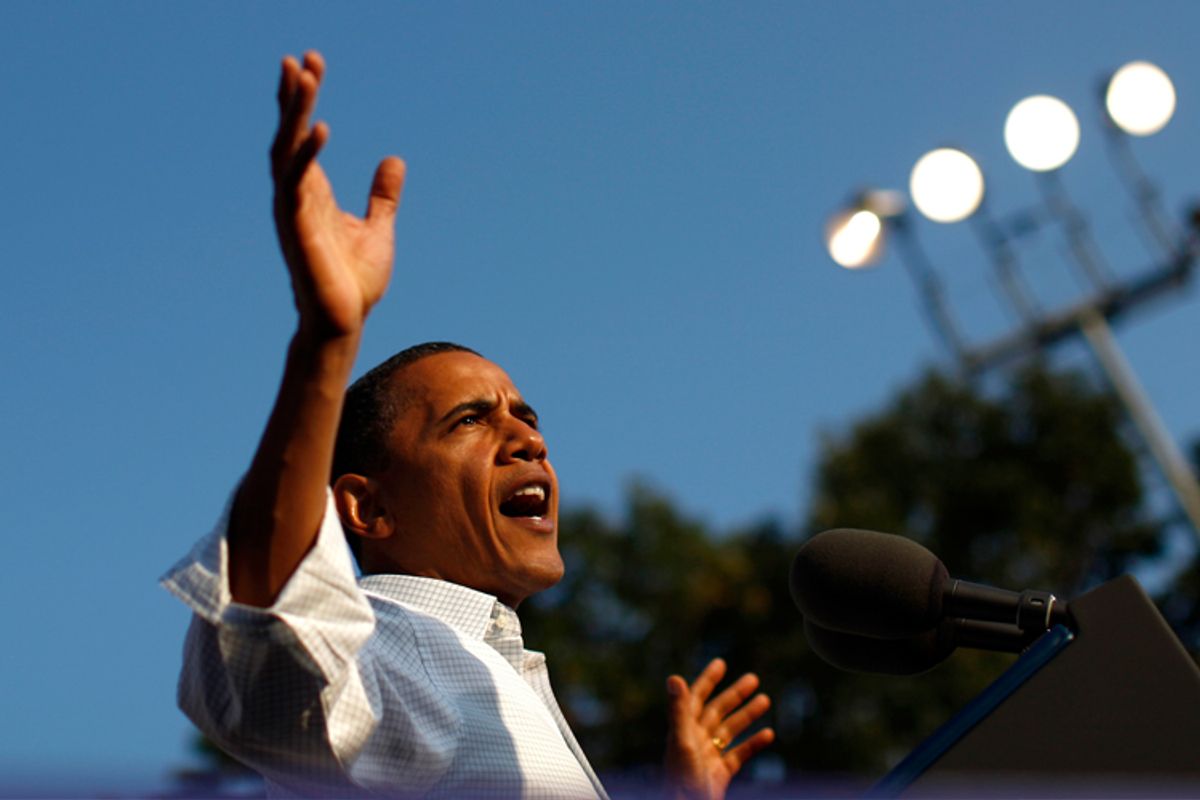 President Obama speaks at a rally in Philadelphia on Sunday.
--

Less than a month before the midterms, the White House is now focusing its political messaging on how Republicans are funding their campaign efforts, with President Obama himself calling out Karl Rove and the Chamber of Commerce in speeches last week and using a rally on Sunday to warn that "special interests" backing the GOP pose "a threat to democracy."

There are two ways to look at this strategy. From the "How things should be" perspective, it's pretty much a winner. Obama's specific claim that the Chamber of Commerce is using foreign money might be going too far; while the Chamber does take in money from foreign sources, it insists that it doesn't actually use any of that money for campaign activities -- a claim that may well be valid. But the broader argument that major business and industry groups are helping to fuel the GOP's election push (and that they're able to do so quietly, thanks to a recent Supreme Court ruling) has the ring of truth. And his statement that Rove is helping to raise money for and advise a group that can raise big money from these sources is plainly accurate -- just as Rove's denials are plainly slippery and insincere.

But from the "How things actually are" perspective, all of this will get Obama and the Democrats absolutely nowhere. If anything, pointing out of the shady ways that the opposition raises money is the tactic of last resort for candidates in doomed elections. Even when arguments are spot-on, they are too complicated and too abstract to win over voters, who mostly believe that selling out to special interests for campaign cash is a habit of both parties.

Obama's attacks on the GOP's fund-raising immediately calls to mind the dying days of Bob Dole's 1996 presidential campaign. The GOP nominee hadn't led Bill Clinton in a single poll since emerging from the Republican primaries, but he smelled opportunity in mid-October when reports broke about the possible campaign finance violations by John Huang, a DNC fundraiser and former official with an Indonesian conglomerate who had raised money for the party at a Buddhist temple in Los Angeles. Dole desperately tried to gin up outrage over the possibility that money from foreign nationals and foreign companies might have found its way into the Clinton reelection effort.

"They've got their own laundromat, pumping out money," Dole said of the Democrats. "Now they are out raising money at Buddhist temples where they take a vow of poverty."

But there was no outrage, and Dole was lucky to garner 159 electoral votes on Election Day -- the worst showing for a Republican since Barry Goldwater.

There's also the example of George McGovern in 1972, who lagged far, far behind Richard Nixon all year. With Nixon, the campaign finance dirtiness was breath-taking and blatant, with reports of slush funds and shakedowns regularly making the news for more than a year before the election. Ultimately, of course, Nixon was taken down -- but only when the Watergate scandal reached into the Oval Office and Nixon's personal misconduct became as comprehensible to voters as it was outrageous. In 1972, when voters were inclined to reelect him and to shun McGovern, all of the reports of shady activities sounded like little more than politics as usual to the masses. When you hear Obama hammering the Chamber of Commerce and Karl Rove today, just remember that after airing this television ad, McGovern won all of 13 electoral votes: