Racial battle lines are being drawn, and campaign ads from both parties have sunk to parallel, poisonous lows 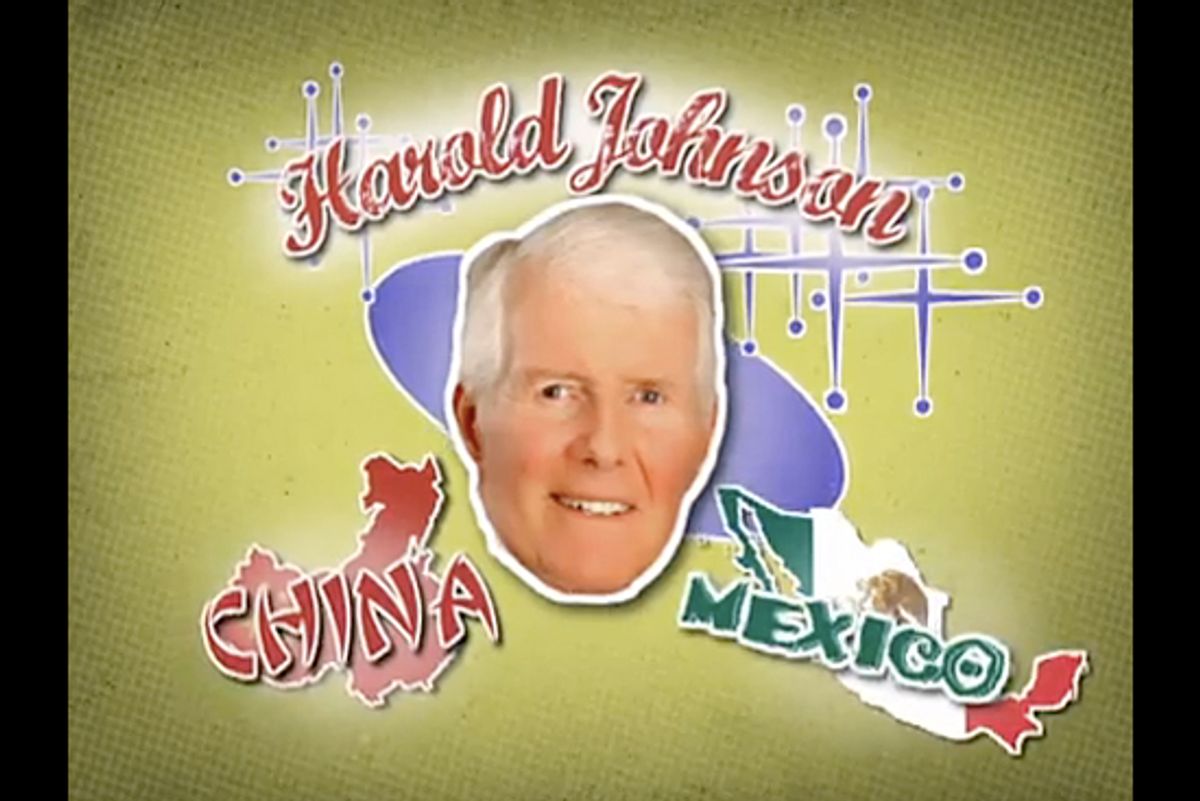 With less than a month before Election Day, Americans are being whipped up into a xenophobic froth. On Friday, the Wall Street Journal headlined a story “China-Bashing Gains Bipartisan Support”, noting that “China is emerging as a bogeyman… with candidates across the American political spectrum seizing on anxieties about the country’s growing economic might to pummel each other on trade, outsourcing and the deficit.”

Unafraid, apparently, to be mocked for mimicry, the Times led off yesterday’s paper with a dangerously identical story entitled “China Emerges as a Scapegoat in Campaign Ads”, pointing out “With many Americans seized by anxiety about the country’s economic decline, candidates from both political parties have suddenly found a new villain to run against: China.”

This spot for Spike Maynard, a West Virginia Republican who’s taking on incumbent Nick Rahall, traffics in a familiar form of stereotyping that has quickly become acceptable again. The 19th and early 20th century fear of millions of Chinese overwhelming us physically becomes re-expressed in economic terms; a new and different kind of Chinese ubiquity:

“It’s on our jeans. Even children’s toys. Made in China.”

…and we see a label that picks up the iconography of the Chinese flag, followed by a canny shot of a menacing toy robot. At the same time, we’re hearing tinkly music that sounds like it was lifted from a scene in a Charlie Chan movie. Superimposed on a red – get it?? – background: Images of wind-turbines that are being manufactured in China, thanks to Nick Rahall’s efforts.

And then there’s the Pennsylvania Senate race.

Republican Pat Toomey is leading Joe Sestak by around 9 points – and the clearly frustrated Democrats are coming close to making Toomey sound like a double agent.

This spot – which comes from the Democratic Senatorial Campaign Committee ­– blasts Toomey for not just sending jobs to China, but for moving to China “…to work for a Hong Kong billionaire who wanted to help the Chinese economy.”

The last line drips with desperation; it doesn’t merely question Toomey’s politics, it questions his patriotism. And mind you, it’s from the party itself, not a rogue candidate:

“Job killer Pat Toomey. Maybe he ought to run for Senate – in China.”

Halloween is approaching, and that sure feels like the ghost of Joe McCarthy. It’s hard to see how the Democrats can get all hot, bothered and huffy when the Tea Party calls President Obama a socialist, if they’re calling Toomey a Commie sympathizer.

In North Carolina’s 8th Congressional District, the Democratic Senatorial Committee is taking a bit more whimsical approach in a spot for Larry Kissell.

A bunch of high-style merchandise pops onto the screen, including “relaxed fit” jeans – it feels very Old Navy-ish – followed by an image of Harold Johnson. He’s the dude responsible for making sure all that cool-looking fashion is made in China or Mexico.

The spot also features a particularly evocative shot of a large container ship racing towards the camera; the metaphor is clear – we are at war, economic war, and this battleship is doing its part in a 21st century combat mission. It’s carrying “poly-cotton blend baseball caps.”

Over to job-blasted Ohio. In another Congressional mud wrestling event, incumbent Democrat Zack Space is calling Bob Gibbs “a proud free trader.” But that’s not enough. The spot goes on to accuse Gibbs of having an unhealthy interest in the Chinese economy, claiming that he “Wants to increase THEIR standard of living.” There’s no doubt that racial battle lines are being drawn.

The corresponding imagery: a street-scene of perky Chinese, basking in affluence.

The announcer then asks: “But what about Ohio – we’ve lost 91,000 jobs to China.” And the scene of Chinese wealth is contrasted with a shuttered factory - it’s actually the same one I’ve seen in a clutch of other spots. It must be the Democrat’s go-to stock photo for economic rust-belt devastation.

The spot ends with the only use of Mandarin I’ve heard thus far. We cut to another street scene, this one with a giant dragon being paraded by celebrating Chinese; it seems to be New Year’s, but they are really celebrating their economic ascendancy. An announcer ironically declaims “As they say in China, xie xie Mr. Gibbs.” The giant type on screen reads “Thank You, Mr. Gibbs.”

In the brutal race in Nevada – where Sharron Angle appears to have inched ahead – Harry Reid is running full-throated negative stuff that bashes Angle for supporting “tax breaks for outsourcing” and calls her “A foreign worker’s best friend.”

Taken together, the narrative is unmistakable. Tens of millions of dollars are being spent, by both parties, on advertising that dredges up the deep, primitive subtext of the old Yellow Peril racism. It’s palpable, and pulsating. (The phrase was popularized by G.G. Rupert, an influential U.S. religious figure, in his shamelessly titled book.)

The Democrats and the Republicans have sunk to parallel lows; they’ve submersed to a level where you literally can’t separate the attacks. By comparison, Ronald Reagan’s famous “bear in the woods” commercial seems elegant and fair-minded. It’s symbolic, and it didn’t gin up ham-handed symbols of Russian power to make its point.

There’s a reason, of course, for this campaign focus. Americans are scared. A Washington Post/ABC News poll earlier this year found that Americans “divide evenly” in terms of whether this will be more of an American Century or a Chinese Century.

China, of course, is a force to be reckoned with. But we’re seeing some irresponsible posturing going on; from where I sit it’s damn close to racial and cultural demonizing, and it can’t exactly help our country as we deal with the global complexities of our largest debtor nation.

Elections are always ugly, but the ugliness is usually short term. In this case, by appealing to our worst instincts, both parties are conspiring to leave some enduring cultural poison with a very long half-life.