A foreclosure mess of their own design

How the real estate finance industry wrecked itself: The sorry tale of the Mortgage Electronic Registration System 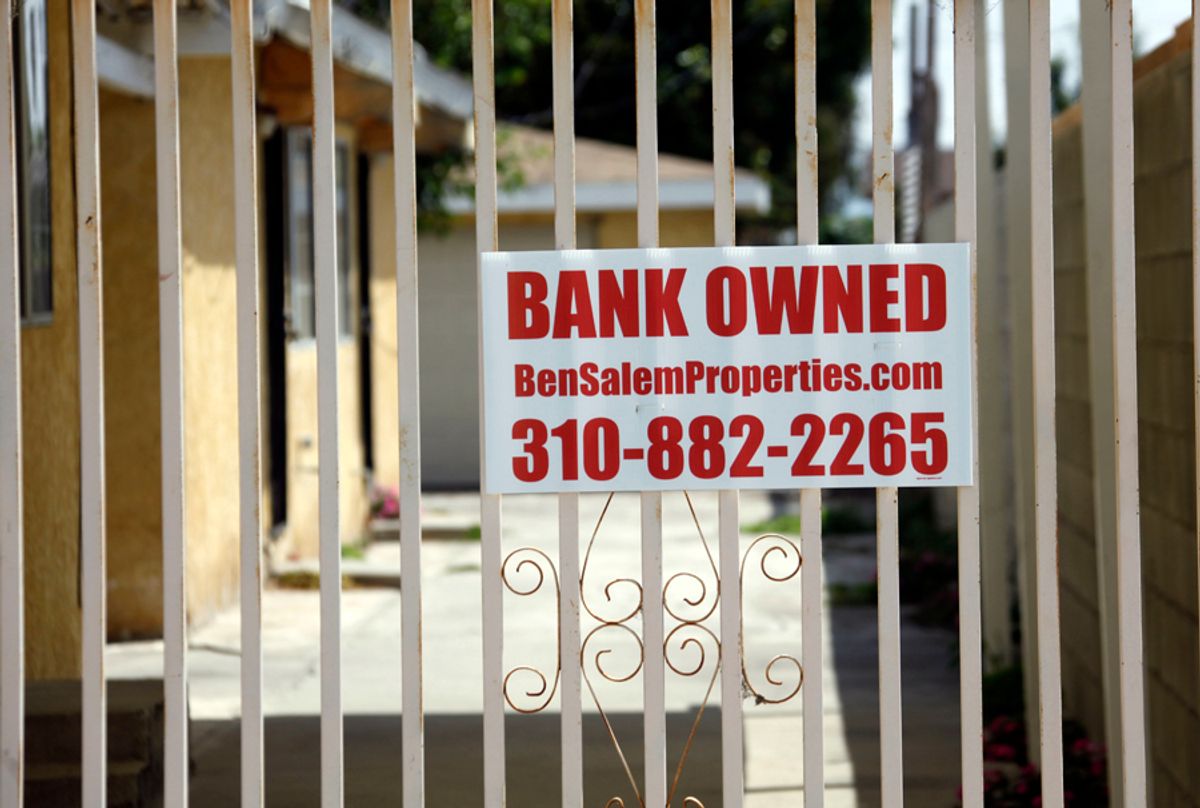 A "bank owned" sign is seen on a home that is listed as a foreclosure on a HUD website, in Hawthorne, Calif., Wednesday, July 21, 2010. Mortgage default notices for California homeowners have fallen to a three-year low after a fifth straight quarterly decline as conditions improved in more affordable, foreclosure-battered markets, a research firm reported Wednesday. (AP Photo/Reed Saxon) (Reed Saxon)
--

Why do some courts consider a properly prepared document trail for mortgage loans so important? Christopher Peterson, a law professor at the University of Utah, provides part of the answer. He quotes a federal bankruptcy judge:

Lest one think that the ... Courts have exalted form over substance, it is critical to note several concepts.... [W]e are dealing with interests in Land -- not a security interest in an inventory of plumbing fixtures, in chinchillas, in canned corn, or in a lawn and garden tractor. Land. Land is certainly the asset which people deem to be their most important "possession": There is no other "thing" more important historically in our culture tha[n] an interest in land, whether that interest be in a condominium, in a house, or in farm. Land. The transferring of interests in land has been entrusted to a system of records that allows people to be certain that this single most important asset in their lives is indeed going to be theirs, and that the encumbrances recorded with respect to this asset are in fact accurate and valid. It is therefore absolutely imperative that transactions in land be guaranteed to vest title in the people who invested in those transactions, and that the investors know definitively the interests in the land in which they invest which may affect their interests in this singularly important asset. The record of land transactions in the Recorder's Office provides this critical assurance. Perhaps the most critical aspect of this "chain" of assurance is to guarantee as much as possible on the face of an instrument that a person purported to have signed a document which affects interests in land actually did sign that document.

That quote comes from the riveting paper, "Foreclosure, Subprime Mortgage Lending, and the Mortgage Electronic Registration System," published in the Summer 2010 issue of the University of Cincinnati Law Review. (Hat tip, Felix Salmon.) And I'm not joking when I say "riveting." The relevance of Peterson's work to the current foreclosure crisis is astonishing. Peterson tells the tale of the Mortgage Electronic Registration System (MERS) -- a cost-cutting system cooked up in the mid-'90s by the real estate finance industry that, argues Peterson, played a critical role in both fueling the subprime crisis and making a complete hash out of the foreclosure process. Or as the author rather more colorfully puts it "MERS abetted a fly-by-night, pump-and-dump, no-accountability model of structured mortgage finance."

Just as a taste to whet your interest, here's the last paragraph:

MERS did not, by itself, cause the mortgage finance crisis and its ensuing aftermath. But it was an important cog in the machine that churned out the millions of unsuitable, poorly underwritten, and incompletely documented mortgages that were destined for foreclosure. In the aftermath of the mortgage finance crisis that has crippled the American economy, necessitated massive taxpayer bailouts of financial institutions, and left millions of American families ejected from their homes, the judiciary has an obligation to aggressively reexamine our financiers' cut corners, false assumptions, and jaundiced legal theory.

MERS bills itself as an "innovative process that simplifies the way mortgage ownership and servicing rights are originated, sold and tracked [AND] eliminates the need to prepare and record assignments when trading residential and commercial mortgage loan." But whether intended to or not, MERS' signal achievement is to obscure the paper trail recording who actually owns a loan. Even worse, MERS' legal status to initiate foreclosure proceedings on defaulting loans appears not to be based in any actual legal precedent or statute -- a fact that has resulted in a growing flurry of court actions. Reading Peterson, it is impossible to avoid the conclusion that the real estate finance industry, acting under its own auspices, is itself responsible for so confusing the question of who owns what that the entire market for residential-mortgage-backed securities is mortally threatened.

Even when Peterson hedges his bets, he is withering:

Perhaps MERS, Inc. is correct that doing so is more efficient and modern; and, maybe they are even right that it is better for the American people at the margin. But this effort is without question a surrender of the messy compromises inherent in representative democracy to the seductively easy lure of mercantile oligarchy. Bankers complain so much less when courts, regulators, and legislators let them do whatever they want. Still, perhaps those of us with romantic attachments to our Republic and the rule of law will be excused for supposing that if the mortgage bankers wanted a newer, more efficient, national land title recording system, they should have asked Congress or the legislatures first.