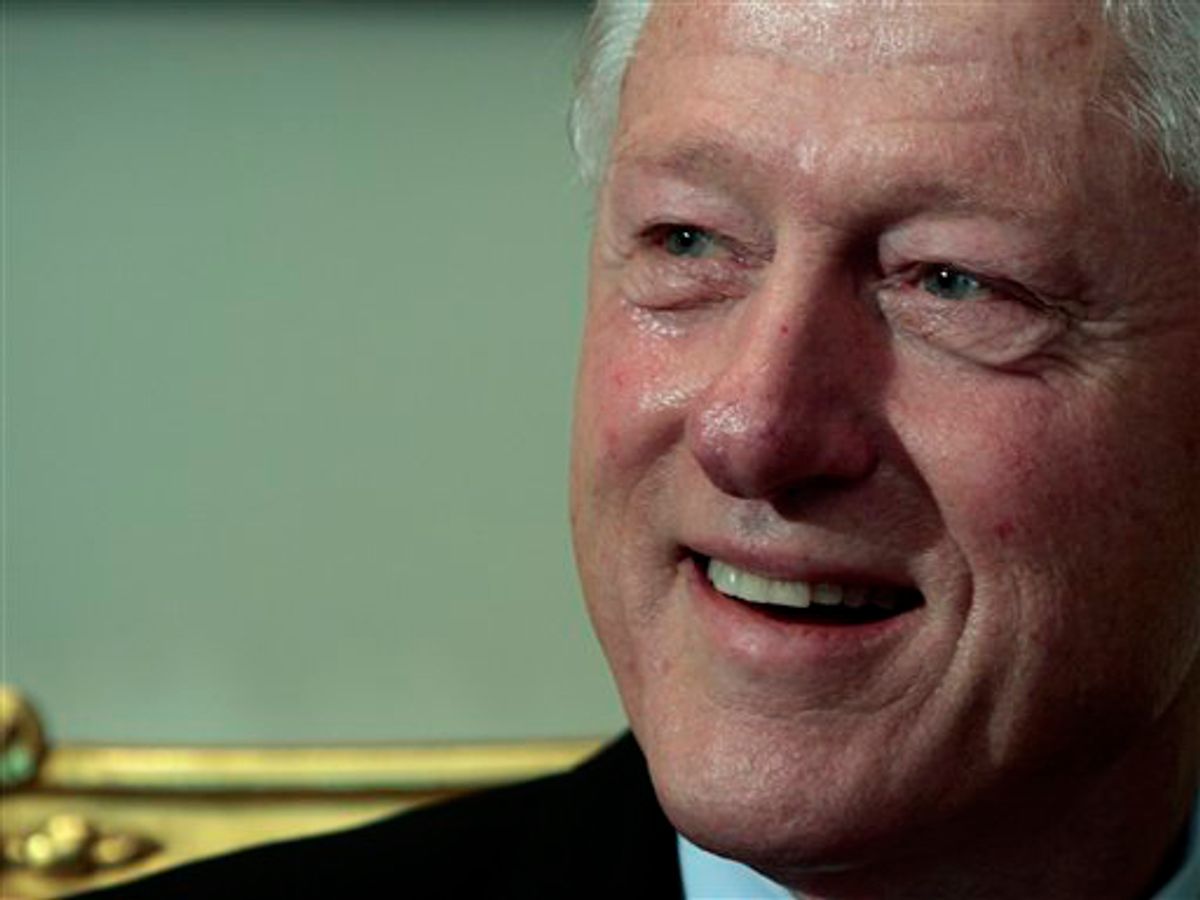 For his inaugural piece at the Huffington Post, Howard Fineman has written the kind of column that irritates me to no end, suggesting that Bill Clinton has some kind of special formula that allows him to connect with voters that Barack Obama can't reach.

Entitled "The Power of Clinton, the Invisibility of Obama," the piece tells the story of a rally for Jack Conway, the Democratic nominee for Senate in Kentucky, that Fineman attended today. Clinton was the featured speaker, and Fineman was awed by the former president's communication skills. He was "treated to respect bordering on awe" by the crowd, we're told, and is "beloved" in Kentucky, a state he won in both 1992 and 1996. And on the stump this fall, "Clinton is all too happy to show Obama how it's done. As a campaigner and as president, Clinton's gift was his ability to untangle the knots of even the most complex policy issue and explain it in plain language to people suspicious of the powerful -- but eager not to be screwed by them or to be seen as dupes."

Look, if Fineman wants to dissect and celebrate Clinton's speaking skills, that's fine. Clinton is clearly one of the most effective communicators in recent political memory. No argument there. But comparisons between Clinton in 2010 and Obama in 2010 are worthless. Clinton is a former president who left office popular; Obama is a sitting president presiding over a gruesome economy in a profoundly anti-Democratic political climate. It's easy for Clinton to "connect" now, and it's impossible for Obama to do so. There's just no point in comparing them, or in suggesting that Clinton can somehow "show Obama how it's done."

A much more valuable comparison, as I've written before, is between Obama today and Clinton in 1994. That was the last time before now that Democrats enjoyed control of the White House and both chambers of Congress and, like Obama, Clinton was facing a brutal political climate in a midterm election year. All of the communication skills that Clinton flashed today were on display then -- but they were absolutely worthless. The country was in revolt against Clinton and the Democrats, turned off by a series of presidential mishaps and failed legislative initiatives and convinced their taxes had been raised in 1993. He had carried Kentucky in 1992, but he was hardly "beloved" in the state in '94.

How bad was it? In the spring of 1994, longtime Democratic Rep. William Natcher died, and in the special election to replace him, an unknown Republican named Ron Lewis claimed the seat in a seismic upset, the first time the GOP had won the seat in 129 years. It was a direct repudiation of Clinton by the very voters who, in Fineman's telling, can't resist him. "I think the biggest immediate factor right now is the hostility to President Clinton, which seems to me to be extraordinary," Merle Black, the Emory University political scientist, said at the time. "For whatever reason, a lot of moderate to conservative white voters in the South do not like the way Clinton has conducted his presidency." In the fall, Republicans took aim at then-Rep. Tom Barlow, a first-term Democrat from the state's First District. Here's a taste of how that race went:

Clinton, who won 48 percent of the vote in this district in 1992, has few defenders now. Even Barlow has been running away from the president in the final stretch of the campaign, airing a television ad that starts out: "Tom Barlow fights for Kentucky. He opposed Bill Clinton on 25 major issues like gun control, gays in the military and tobacco taxes."

Ed Whitfield, 51, the Republican challenger, mentions Clinton's name four times in one 30-second TV ad and campaigns on the slogan: "Ed Whitfield, for a New Congress."

Barlow, of course, went on to lose in November.

What Fineman should have written is something like this: Clinton is a masterful communicator, but when the tide had turned against his party, his skills were useless. Only when conditions improved did voters rediscover his charm -- and only when he was out of office did he attain "beloved" status. The same story may yet play out for Obama, who proved in 2008 that he's no slouch in the communication department, either. Obama's skills aren't doing much for him today, but if the unemployment rate drops, the magic will be back. And if he leaves office a popular president after two terms, he too will one day be described as a "beloved" former president.