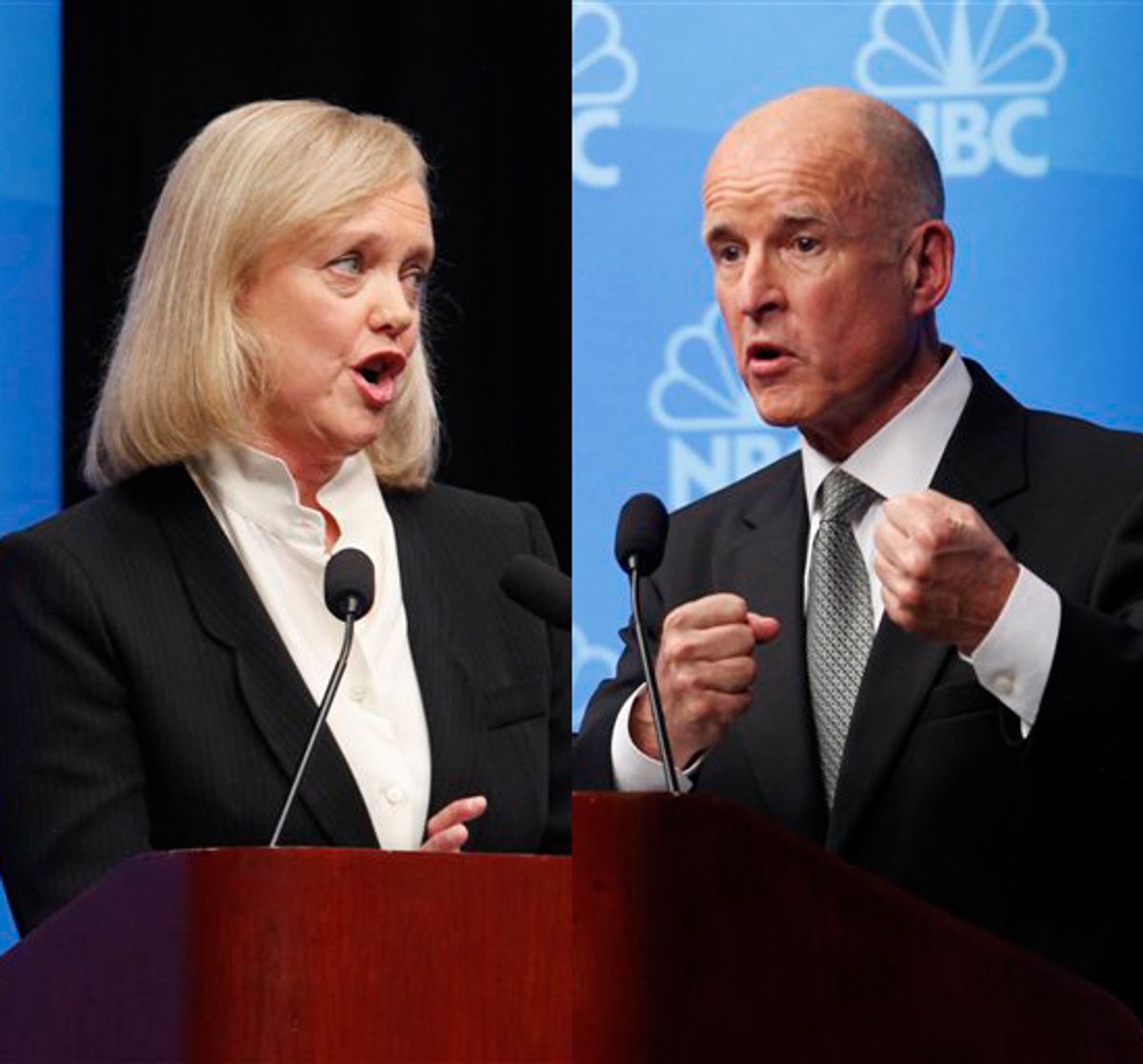 Politics and government are depressing and broken right now, no place more than in California. And yet Tuesday night's gubernatorial debate was weirdly encouraging. Californians face a stark choice between former eBay CEO Meg Whitman and former Gov. Jerry Brown, and in their clash, they didn't try to blunt their sharp edges. Moderator Tom Brokaw let them go at one another, and it was fun to watch the two trade barbs and actually appear to care about who gets to run this once-great state.

Whitman was occasionally impressive, more engaged and less robotic than in the two previous matches. She's smart, and you sometimes got the feeling that if she'd ever paid attention to government – just by regularly voting, not necessarily making it a career – she might have some novel political and policy ideas. Because she's only recently tuned into politics, though, her actual ideas are sketchy, apart from the GOP mantra of cutting taxes and spending. And the fact that she's spent over $120 million of her own fortune for the job doesn't make her seem more qualified.

Brown was more intriguing. As someone who's followed his career for 30 years, I haven't fully understood this last act. The idea of our former boy governor coming back as our senior-citizen governor has occasionally seemed like a failure of Brown's imagination (and California's, politically) than a great gift for the state. But watching him punch out the greatest hits of his first time around – he cut taxes, he created a budget surplus, he twice vetoed public employees raises, he recommended creating a two-tier pension system, while his alternative energy and economic development programs remain not only ahead of their time, but of our time – you could imagine him having the energy and experience to begin to fix some of what's broken, and fast. It was fun to watch him reject Whitman's blame for the state's tax, regulation and business climate problems by noting the state has had three Republican governors (and one Democrat) since he held the office.

Sadly, most attention will probably go to the way they handled the two "scandals" in the race, which local media seem to want to conflate: Whitman's hiring and firing (after nine years) of an undocumented worker as her family maid, and the leaked tape of a Brown staffer suggesting the female Republican is a "whore" for allegedly promising not to cut police pensions in exchange for a police union endorsement. Whitman is clearly hoping the two issues will balance one another out. But it's been hard for her to make a big deal of the "whore" slur when one of her most prominent backers, former Gov. Pete Wilson, is on record calling all politicians "whores." Like it or not, in the political realm the word has little sting anymore, and almost no tie to gender. Brokaw's comparing it to the "N-word" for women was a rare misstep for the otherwise smart moderator.

As he did in the last debate, Brown scored points on Whitman's firing her maid Nicky Diaz by pointing out the simple human unkindness of Whitman's decision – and by extension, her approach to all undocumented workers. The eBay CEO "didn't even get (Diaz) a lawyer ... she says no to a path to citizenship and that is basically treating people from Mexico as semi-serfs, work 'em and send 'em back. It's not right." He added, "These are mothers and dads, and kids,” and said of Whitman's refusal to support any path to citizenship: "I don’t think that’s human; I don’t think it’s right.”

I thought the best exchange came around Whitman's proposal to cut the state's capital gains tax. Brown attacked it for giving 82% of its benefits to people making more than a half-million dollars a year, and asked how much Whitman's taxes would be cut by her proposal. She didn't answer, but she didn't apologize either: "I'm an investor, and investors will benefit from this, but so will job creators. My business is creating jobs, and yours is politics." That's a clear choice for California voters, whether the interests of investors should be paramount in tax and public policy decisions. Whitman also made a strong defense of spending her own vast fortune, saying it gives her a political "independence" Brown doesn't have. If voters want to believe only great wealth guarantees a politician's independence, that's another stark choice.

Whitman's biggest problem is that despite Brown's longevity in government, he really does have an ideologically mixed up background. On the education issue alone, he did start charter schools in Oakland, and the California Teachers' Association, which backs him now, supported his opponent when he ran for attorney general. He really did veto state-employee pay raises, and try to reform the state's over-generous pension system. (For the best look at Brown's record from governor to mayor to attorney general -- including the lost years when he was a raging anti-corporate radio host -- read John Judis in The New Republic.) Brown's biggest problem, frankly, is that many voters know he doesn't always govern as energetically or as innovatively as he debates. But his Tuesday night clash with Whitman made me more optimistic that Brown knows he won't get another chance at this, and might finally show California what he can do.