Are you safer if the cook is wearing gloves?

A new study suggests that they give wearers a false sense of hygiene. We may be better off without them 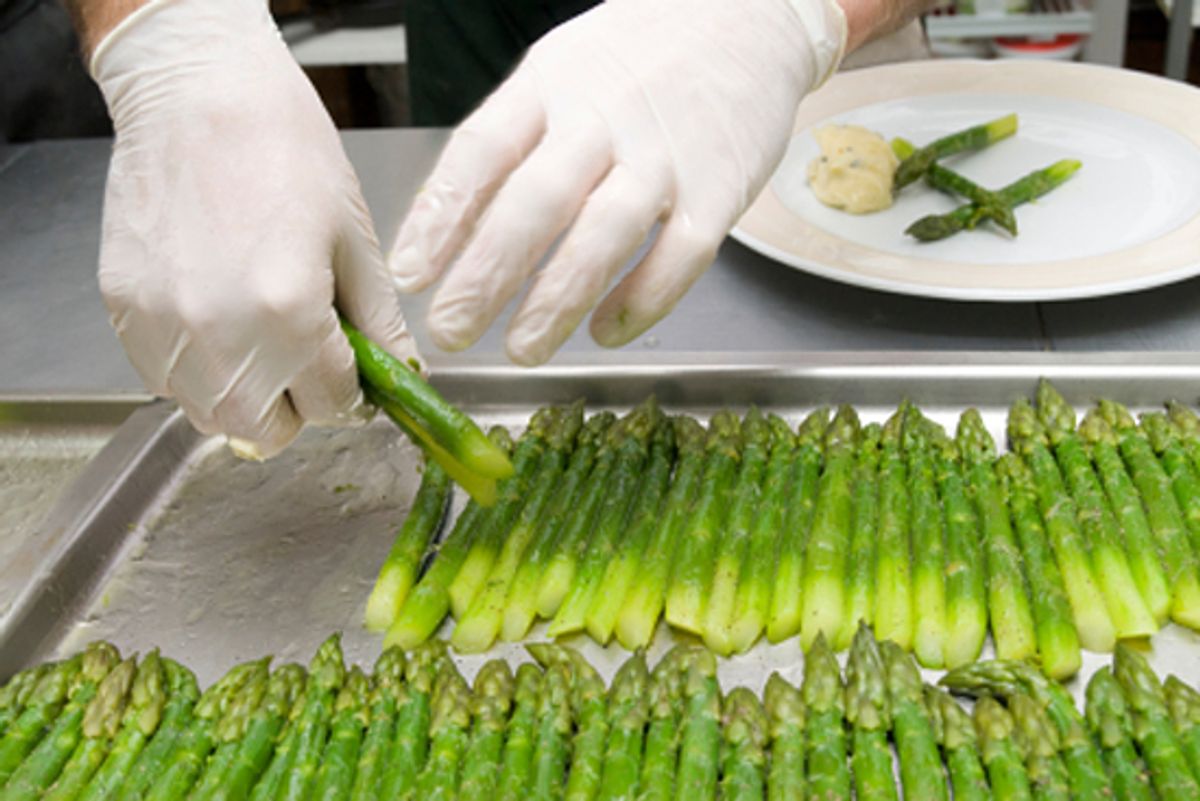 Preparation of an asparagus
--

You're at a deli. You watch the cook take the trash out, or have a cigarette, or step away to heed nature's call, and then come back to the kitchen just in time to make your sandwich. "Put some gloves on her!" you want to scream, and, well, health departments all across the country feel the pain of your silent cry. In many cities and states, people handling food have to wear gloves to protect customers. But is wearing gloves actually effective?

As reported by Food Safety News, a new study in the even-more-thrilling-sounding Journal of Food Protection found that wearing gloves is not only no better than thorough, regular hand washing, but may actually be worse than wearing no gloves at all. The heat and moisture from your hands inside are like a Jersey Shore hot tub for bacteria, and neither glove nor reality show star is ever impervious to "losses of integrity," letting that bacteria loose on your ham and Swiss on rye. But to my mind, the study's most salient point is the notion that wearing gloves creates an aura of hygiene that makes it far too easy for cooks to stop thinking about where their hands have been.

And as both a professional cook and eater, nobody knows the gloves I've seen: flapping plastic hovering perilously, meltingly close to a sizzling hot griddle; gloves blackened with hours of handling coins and cash; sheathed hands reaching for bleachy sponges to wipe down counters. Of course, all these could be fine if the wearer would change gloves when they switched to touching food, but people just don't tend to do that.

Remember when you were a kid, when you got dressed up in a rain slicker and all of a sudden you didn't care where you sat, no matter how muddy it was? It's the same mentality at play. As a cook, I developed an instinct where if my hands touched something I wouldn't want in my mouth, they would almost glow with warning until I washed them. I literally would not be able to stop thinking about where my hand had just been until I gave it a good soapy rubdown, which, admittedly, was not good for social interaction, but was pretty good for not getting people sick. But when I would be asked to wear gloves, the loss of tactile response made me blasé towards what I was touching – without feeling the bleachy water on your skin, without feeling the grimy softness of dollar bills, it becomes easy to forget you touched those things, especially when the ticket machine is clacking away and orders are pouring in. Where I would have habitually, pathologically made time to wash my hands before, it was now easy to just keep slapping food together.

So is requiring gloves for food handlers just another well-intentioned regulation that doesn't really pan out in the real world? Barbara Campbell, who teaches Food Safety at the Culinary Institute of America, doesn't think so. "I think gloves are a good idea," she said to me. "It's easier to see if someone's gloves are dirty, and it's harder to notice if someone's washing their hands. But, like anything, it has to be managed." For example, cooks should only use gloves for when they're touching food, so they maintain a sense of intentionality and diligence. "Seeing someone doing something with gloves on when they shouldn't, like mopping the floor or taking cash, that's the biggest turnoff," Campbell said, with the suggestion of a shudder. "If the person handling my food doesn't look clean or tidy, I've turned around and walked away from places."