Chile rejoices over mine rescue

Anxiety surrounding the extraction phase melted away at 12:11 a.m. 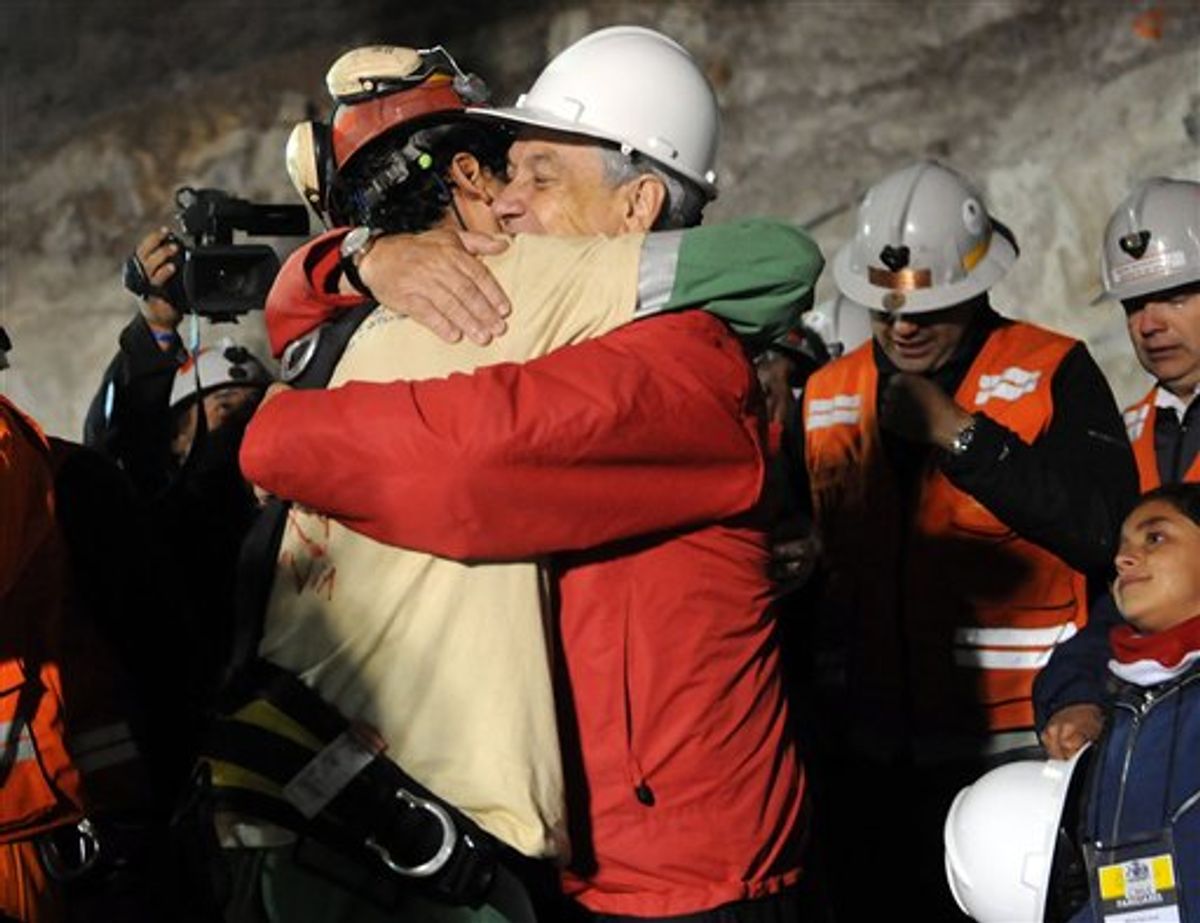 In this photo released by the Chilean presidential press office, Chile's President Sebastian Pinera, front right, hugs rescued miner Florencio Avalos after Avalos was rescued from the the collapsed San Jose gold and copper mine where he was trapped with 32 other miners for over two months near Copiapo, Chile, Tuesday Oct. 12, 2010. (AP Photo/Jose Manuel de la Maza, Chilean presidential press office) (AP)
--

The miners emerged like clockwork, jubilantly embracing wives, children and rescuers and looking remarkably composed Wednesday after languishing for 69 days in the depths of a mine that easily could have been their tomb.

The anxiety that had accompanied the final days of preparation melted away at 12:11 a.m. when the stoutest of the 33 miners, Florencio Avalos, emerged from the missile-like rescue capsule smiling broadly after his half-mile journey to the surface.

In a din of cheers, he hugged his sobbing 7-year-old son and wife and then President Sebastian Pinera, who has been deeply involved in an effort that had become a matter of national pride.

The most ebullient of the bunch came out second, an hour later.

"I think I had extraordinary luck. I was with God and with the devil. And I reached out for God," said Mario Sepulveda as he awaited the air force helicopter ride to a nearby hospital where all the miners were to spend 48 hours under medical observation.

Eleven men were pulled from the mine at a methodical pace in roughly the first nine and a half hours of the operation, putting the rescue on track to end before the sun rises Thursday, barring any major glitches.

The miners have survived more time trapped underground than anyone on record, and the world was captivated by their endurance and unity as officials carefully planned their rescue.

Health Minister Jaime Manalich told a news conference after eight miners were rescued that all of them were in good health, and none has needed any special medication, not even the diabetic among them.

Chile exploded in joy and relief at the first, breakthrough rescue just after midnight in the coastal Atacama desert.

In the capital, Santiago, a cacophony of motorists' horns sounded. In the nearby regional capital of Copiapo, from which 24 of the miners hail, the mayor canceled school so parents and children could "watch the rescue in the warmth of the home."

All-news channels from North America to Europe and the Middle East carried live coverage. Pope Benedict XVI said in Spanish that he "continues with hope to entrust to God's goodness" the fate of the men. Iran's state English-language Press TV followed events live until President Mahmoud Ahmadinejad touched down in Lebanon on his first state visit there.

After the fifth miner made his ascent, the rescuers paused to lubricate the spring-loaded wheels that gave the 13-foot-tall capsule a smooth ride through the shaft. Then they brought up the sixth and seventh.

The ninth, Mario Gomez, who at 63 is the oldest miner, came up about an hour later and dropped to his knees and bowed his head in prayer. His wife, Lilianette Ramirez, pulled him up from the ground and embraced him. Gomez has silicosis, a lung disease common to miners, and has been on antibiotics and bronchial inflammation medicine.

The entire rescue operation was meticulously choreographed, with no expense spared in bringing in topflight drillers and equipment -- and boring three separate holes into the copper and gold mine.

Mining is Chile's lifeblood, providing 40 percent of state earnings, and Pinera put his mining minister and the operations chief of state-owned Codelco, the country's biggest company, in charge of the rescue. It went so well that its managers abandoned what a legion of journalists had deemed an ultraconservative plan for restricting images of the rescue.

A huge Chilean flag that was to obscure the hole from view was moved aside so the hundreds of cameras perched on a hill above could record images that state TV also fed live.

That included the surreal moment when the capsule dropped into the chamber for the first time where the bare-chested miners, most stripped down to shorts because of the subterranean swelter, mobbed the rescuer who emerged to serve as their guide to freedom.

"This rescue operation has been so marvelous, so clean, so emotional that there was no reason not to allow the eyes of the world -- which have been watching this operation so closely -- to see it," a beaming Pinera told a news conference after Avalos was brought to the surface.

When the last man surfaces, it promises to end a national crisis that began when 700,000 tons of rock collapsed Aug. 5, sealing the 33 in the lower reaches of the mine. For 17 days after that, no one even knew whether the miners had survived.

Avalos, the 31-year-old second-in-command of the miners, was chosen to be first out because he was in the best condition. When the capsule came out of the manhole-sized opening, and Avalos stepped out as bystanders cheered, clapped and broke into a chant of the country's name -- "Chi! Chi! Chi! Le! Le! Le!"

The next three men out, including the lone foreigner, Carlos Mamani of Bolivia, followed because they were deemed the fittest of body and mind. The 10 to follow included miners with health problems such as hypertension, diabetes and skin ulcers.

Sepulveda's shouts were heard even before the capsule surfaced. After hugging his wife, he jokingly handed souvenir rocks from the mine to laughing rescuers. Then he bounded out behind other officials behind a barrier and thrust a fist upward like a prizefighter.

Putting him on a gurney for a short ambulance ride to a triage center -- the protocol for all the miners -- almost seemed like overkill.

The operation commenced just before midnight when a Codelco rescuer made the sign of the cross and was lowered to the trapped men. A navy paramedic went down after Avalos came up -- a surprise improvisation as officials had said the two would go down to oversee the miners' ascent before the first went up.

The last miner was slated to be shift foreman Luis Urzua, whose leadership was credited for helping the men endure the first two and a half weeks without outside contact. The men made 48 hours' worth of rations last before rescuers reached them with a narrow bore hole to send down more food.

"This won't be a success unless they all get out," she said.

Chilean officials played down the risks of the rescue.

Panic attacks during the ascent, they said, were the biggest concern. The miners were not sedated -- they needed to be alert in case something went awry. Health Minister Jaime Manaliget said rescuers could accelerate the capsule to its maximum speed of 3 meters per second if necessary.

Rescue coordinator Andre Sougarett told The Associated Press beforehand that the worst technical problem would be the possibility that "a rock could fall" and jam the capsule in the shaft.

"You can be good and you can be lucky. And they've been good and lucky," McAteer told the AP just before the operation commenced. "Knock on wood that this luck holds out for the next 33 hours."

The CEO of the Austrian company that made the capsule's winch and pulley system said there was no danger of the motor overheating because the winch was not working under maximum capacity.

Mining Minister Laurence Golborne, whose management of the crisis has made him a media star in Chile, insisted all had been considered.

"There is no need to try to start guessing what could go wrong. We have done that job," Golborne said. "We have hundreds of different contingencies."

McAteer said he gave "very high marks" to the Chileans for creating lowered expectations by saying that it might take until Christmas to rescue the men -- and then consistently delivering results ahead of schedule.

"Second, they have had very few technical problems," he said.

The capsule -- the biggest of three built by Chilean navy engineers -- was named Phoenix for the mythical bird that rises from ashes. It was painted in the white, blue and red of the Chilean flag.

The miners' vital signs were closely monitored throughout the ride, given a high-calorie liquid diet donated by NASA, designed to prevent nausea from any rotation of the capsule as it travels through curves in the 28-inch-diameter escape hole.

Engineers inserted steel piping at the top of the shaft, which is angled 11 degrees off vertical before plunging like a waterfall.

Drillers had to curve the shaft to pass through "virgin" rock, narrowly avoiding collapsed areas and underground open spaces in the overexploited mine, which had operated since 1885.

But Manalich said Wednesday the capsule was not rotating as officials had expected, allowing for faster trips up and down.

A video camera in the capsule watched for panic attacks. The miners also had oxygen masks and two-way voice communication. They took aspirin and wore compression socks to prevent blood clotting in the quick ascent, and wore sweaters for the change in climate -- from about 90 degrees underground to near freezing on the surface after nightfall.

At the regional hospital in Copiapo, two floors were prepared for the miners to be evaluated.

U.S. President Barack Obama praised rescuers, who include the team from Center Rock Inc. of Berlin, Pa., who built and managed the piston-driven hammers that pounded open the hole.

Chile has promised that its care of the miners won't end for six months at least -- not until they can be sure that each miner has readjusted.

Psychiatrists and other experts in surviving extreme situations predict their lives will be anything but normal.

Since Aug. 22, when a narrow bore hole broke through to their refuge and the miners stunned the world with a note, scrawled in red ink, disclosing their survival, their families have been exposed in ways they never imagined.

Miners had to describe their physical and mental health in detail with teams of doctors and psychologists. In some cases, when both wives and lovers claimed the same man, everyone involved had to face the consequences.

As trying as their underground ordeal has been, the miners now face challenges so bewildering that no amount of coaching can fully prepare them.

The world is intensely curious to hear their tale of survival. They have been invited to presidential palaces, take all-expenses-paid vacations and appear on countless TV shows.

Book and movie deals are pending, along with job offers. Previously unimaginable riches await a simple signature for those with savvy.

Sepulveda appeared well aware of his budding options. His performance exiting from the shaft appeared to confirm what many Chileans thought when they saw his engaging performances in videos sent up from below -- that he could have a future as a TV personality.

But he tried to quash the idea as he spoke to viewers of Chile's state television channel while sitting with his wife and children shortly after his rescue.

"The only thing I'll ask of you is that you don't treat me as an artist or a journalist, but as a miner," he said. "I was born a miner and I'll die a miner."