In response to criticism, the screenwriter says Facebook was created by a "deeply misogynistic group of people" 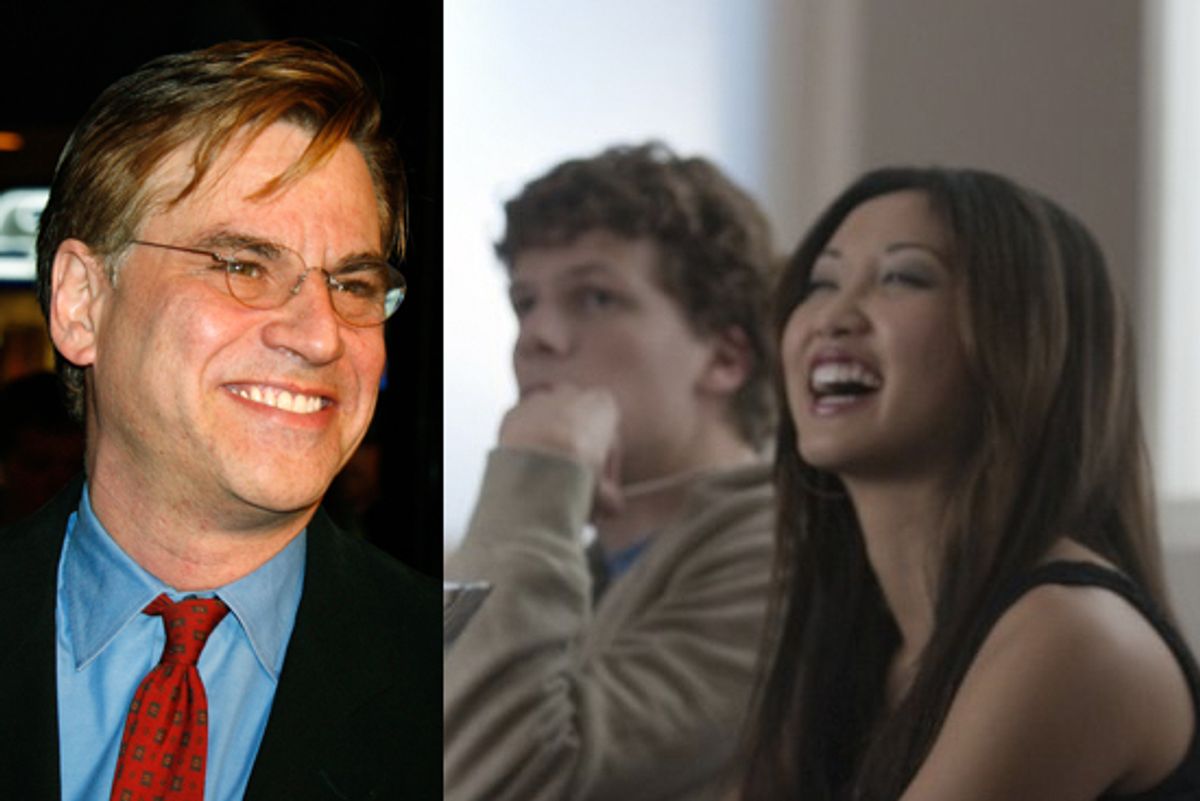 Screenwriter Aaron Sorkin poses as he arrives at the world premiere of the film "Charlie Wilson's War" in Los Angeles, California December 10, 2007. The film is based on the true story of Texas socialite Joanne Herring and US Congressman Charlie Wilson. REUTERS/ Fred Prouser (UNITED STATES) (Â© Fred Prouser / Reuters)
--

After all the debate last week about the portrayal of women in "The Social Network," screenwriter Aaron Sorkin has finally responded. He's responded in the comments section of TV writer Ken Levine's blog, but, still, he's responded! Sorkin apologizes for any offense the movie caused and mounts a predictable defense: He was merely reflecting reality. He writes:

It's not hard to understand how bright women could be appalled by what they saw in the movie but you have to understand that that was the very specific world I was writing about. Women are both prizes [and] equal. Mark's blogging that we hear in voiceover as he drinks, hacks, creates Facemash and dreams of the kind of party he's sure he's missing, came directly from Mark's blog. ... Facebook was born during a night of incredibly misogyny. The idea of comparing women to farm animals, and then to each other, based on their looks and then publicly ranking them. ...

More generally, I was writing about a very angry and deeply misogynistic group of people. These aren't the cuddly nerds we made movies about in the 80's. They're very angry that the cheerleader still wants to go out with the quarterback instead of the men (boys) who are running the universe right now. The women they surround themselves with aren't women who challenge them (and frankly, no woman who could challenge them would be interested in being anywhere near them.)

What I wondered after watching the film was whether it was an accurate depiction of Web 2.0 culture or a Hollywood embellishment, and that was the question I brought to a handful of female programmers. They said they had encountered elements of the women-as-trophies mentality -- much as you'll find in any highly competitive and lucrative field -- but they didn't exactly tell of male coworkers receiving groupie blow jobs in bathroom stalls or doing lines of coke off young interns' tummies (as happens in the movie). Not that I find it impossible to imagine that as a reality, given the aphrodisiacal influence of money, power and prestige. It's just that, at points, it seemed less a critical depiction of misogynist dorks and more a porny fantasy sequence. Part of what makes the movie so kinetic and fun is that the audience gets to go along for the good part of the ride (before Zuckerberg ends up friendless and pining after the girl who got away). We experience the rush of the nerd conquering the jocks' territory -- that territory being money and girls. So, while we can continue to debate whether this is a true reflection of Zuckerberg's particular reality, perhaps the more important fact is that it's undoubtedly a true reflection of a larger cultural fantasy.