The Wall Street Journal figures out a way to stop Obama from imposing socialism: A private sector drill bit! 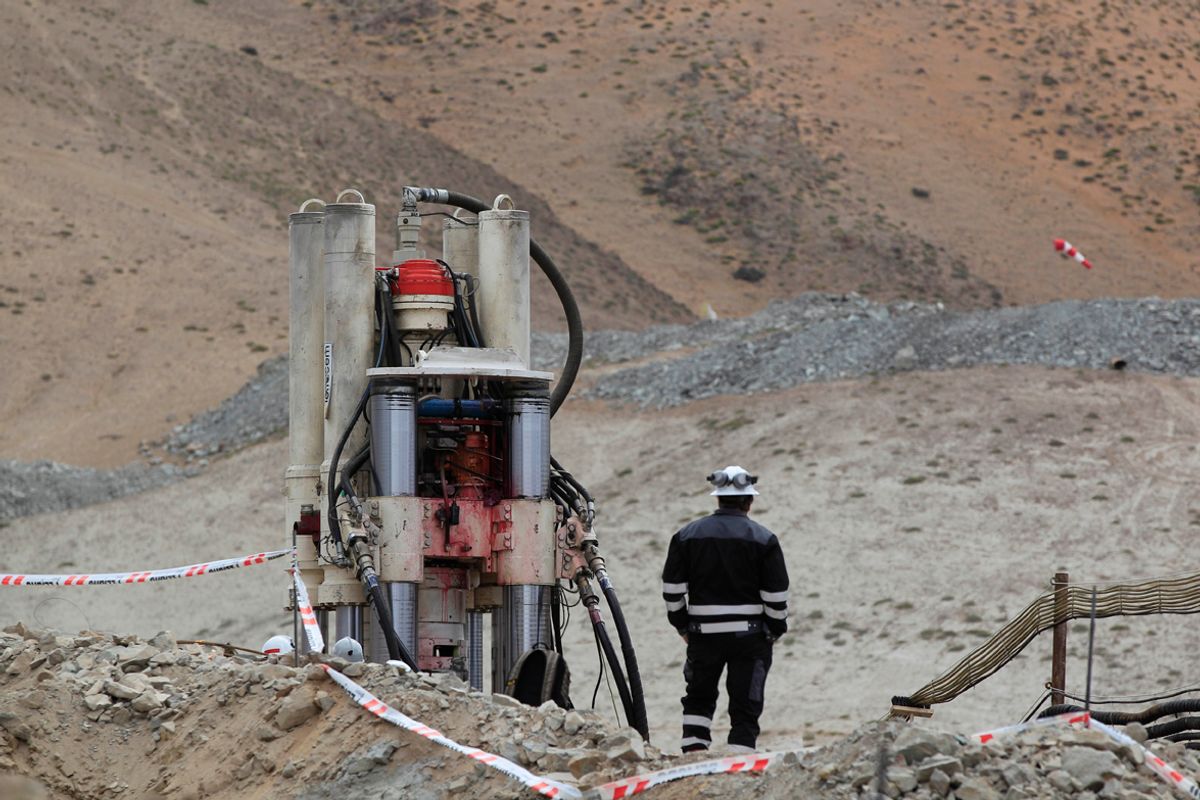 A man stands in front of a new drill to be used in the rescue operation of miners at the San Jose mine in Copiapo, Chile, Thursday, Sept. 2, 2010. Thirty-three miners have been trapped deep underground in the copper and gold mine since it collapsed on Aug. 5. (AP Photo/Martin Mejia, Pool) (Martin Mejia)
--

To state that the opinion writers of the Wall Street Journal have no shame is hardly an original observation, but Daniel Henninger has pioneered new territory with his column today attributing the rescue of the Chilean miners to the wonders of "capitalism."

It needs to be said. The rescue of the Chilean miners is a smashing victory for free-market capitalism.

Henninger's evidence: Technology used in the rescue was manufactured by profit-seeking corporations! A drill bit from a Pennsylvania company. Cellphones from Samsung. Et cetera.

(Surprisingly, Henninger doesn't mention a huge, state-of-the-art construction crane contributed by China's Sany Heavy Industries, which happens to not only be one of the largest construction companies in the world but amazingly isn't even partially state-owned. But maybe the fact that Sany's growth has piggy-backed on state-funded infrastructure investment and superbly executed industrial policy gave him the heebie jeebies. Heaven knows we don't want the kind of government-funded infrastructure investment in the United States that would create jobs and generate profits for construction companies here!)

I don't think it is a controversial point that competition between profit-seeking companies in a free market can result in innovation that improves our standard of living. I guarantee that you would be hard-pressed to find anyone in the current White House that would disagree with that contention. Henninger, however, is under the impression that the core values of capitalism are under attack, and therefore must be defended. President Obama, he whimpers, is criss-crossing the country denigrating the awesomeness of free market capitalism. Denninger doesn't say it outright, but the implication is obvious -- let Obama have his way, and our wonderful capitalist system is imperiled. Miners will die! (Oh wait, our miners are already dying -- and we're not even socialist yet!)

Of course, Obama is saying and doing nothing of the kind. He isn't opposed to free markets. He's opposed to badly regulated free markets. It should also not be controversial to note that there is a middle ground between a completely free market with no restrictions whatsoever and a centrally planned totalitarian command economy. Even conservative economists acknowledge that markets fail. We are living during a period of American history replete with ample evidence that the free market can go awry. The damage inflicted on the American standard of living by financial institutions acting freely in the absence of meaningful government restraint is all too apparent. Capitalism is great, but it doesn't always work without hitches. Humans are pretty smart -- we should be able to figure out how to minimize the devastation and frequency of those failures.

And if nearly ten percent unemployment, millions of foreclosures, and a financial sector consistently teetering on the edge of meltdown isn't enough, there are also longer trends to pay attention to. David Cay Johnston posted another installment of his penetrating series of examinations of tax structure and inequality in the United States at tax.com today. A key paragraph:

During the 1950s and 1960s, the income -- not wealth, but income -- of the bottom 90 percent grew at twice the rate of those at the top. For the last 30 years, the income growth has all been in the top 10 percent and has been heavily weighted to the top tenth of 1 percent. Big incomes and low taxes help wealth pile up at the top, while stagnant to falling wages and steady or slightly reduced taxes push down the bottom.

The only rational interpretation of growing income inequality, combined with the worst financial crisis since the Great Depression, after a period in which deregulatory, free market ideology reigned supreme, is that there are some serious bugs in the system! The goal must be to fix, or at least improve the system, not to replace it.

The inability, or unwillingness, of Wall Street Journal opinion writers to recognize how massively markets have failed us in recent years is a source of constant amazement. The evidence is unavoidable. The attempt to distract us with some arm-waving about Chilean miners would be insulting if it wasn't so revealing. If this is what they're reduced to, they really have no case to make at all.

Chile Mine Rescue How The World Works