I wish they'd beaten the Fox bully with the truth, rather than walking off their own set 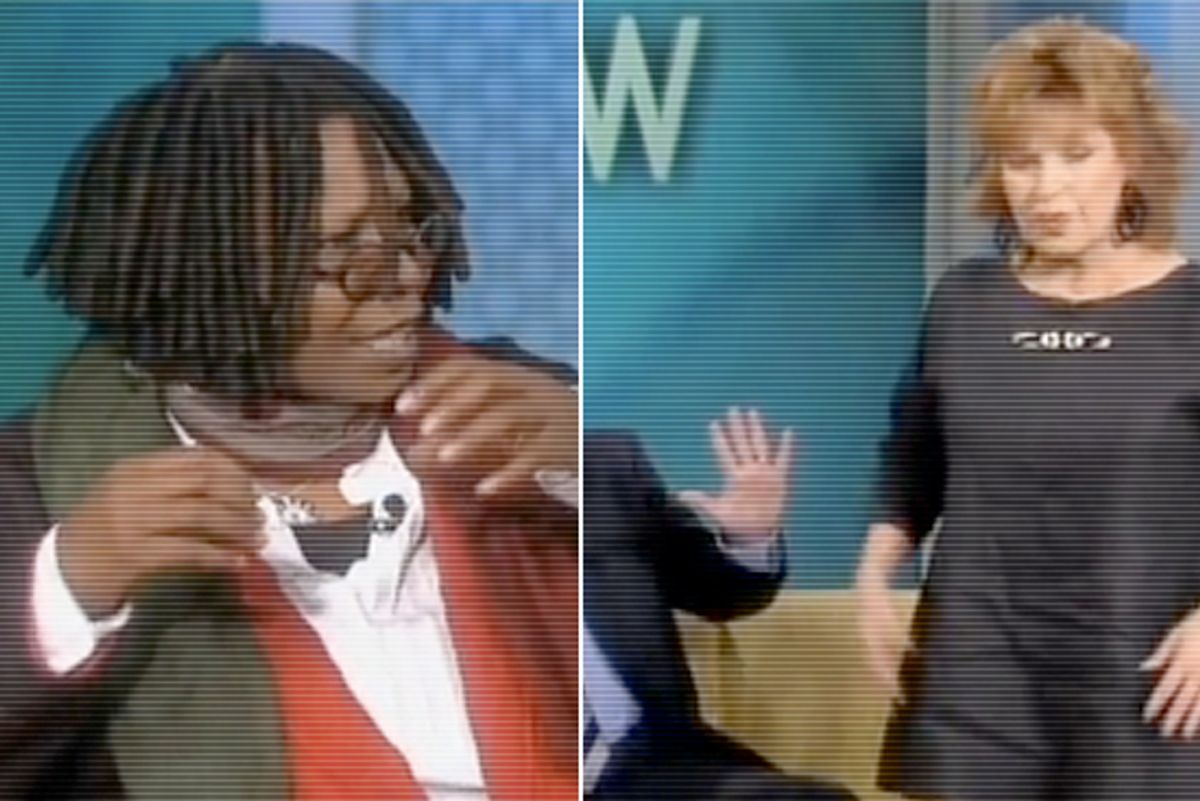 After watching the story explode on Twitter and Facebook, I was really looking forward to seeing Bill O'Reilly get owned by Joy Behar and Whoopi Goldberg on "The View" Thursday morning. I despise O'Reilly and his hour of bullying, "The O'Reilly Factor," while "The View" is my favorite talkfest on television. Besides, having lived to talk about my own showdown with O'Reilly – where he ordered me to "Stop talking!" and told me I have blood on my hands – I know what it's like to want to stalk off the set. I expected to think Behar and Goldberg humiliated O'Reilly by refusing to share their set with him, and I wanted to see that. I admit it, when it comes to O'Reilly, I can be a little bit petty and ungracious.

But sadly, I didn't see that on "The View." I saw O'Reilly flacking his latest vanity book project, "Pinheads and Patriots," with his typical fact-lite, faux-macho "common sense," about why building the Park51 Islamic Center near Ground Zero is "inappropriate" (what a schoolmarmish Bill-O word) – and why President Obama "separated himself from the voters" by affirming the site owners' right to build there. It started off OK: Goldberg refuted O'Reilly's argument by pointing to the 70 Muslim families who lost loved ones on 9/11 (The New York Times counted 60 Muslim 9/11 victims). When O'Reilly insisted that 70 percent of Americans don't want to see the Islamic Center built on the site, Behar asked him where he got his numbers. (In fact, a CBS News poll found that 71 percent of those asked thought the choice of site was "inappropriate.") Goldberg continued to ask O'Reilly, why, public opinion aside, Muslims shouldn't be allowed to worship where they want, given their constitutional right to do so, and O'Reilly lost it, declaring, "Because Muslims killed us on 9/11!" Of course, that's a lie: Islamic terrorists killed Americans, including Muslims, on 9/11, and I expected Behar and Goldberg to refute it. Goldberg started to, saying "What bullshit!" insisting "terrorists" were to blame for 9/11, and asking O'Reilly what religion was Oklahoma City bomber Timothy McVeigh (he was raised Irish Catholic, like me and O'Reilly).

But then Behar got up and said, "I don't want to sit here, I'm outraged," walked away, and Goldberg followed her, leaving an irritated Barbara Walters and conservative Elizabeth Hasselback to try to refute O'Reilly's point. (Hasselback managed to blame Obama, insisting that because he retired the term "War on Terror," now Americans have to say Muslims, not terrorists, killed us on 9/11. Got it?) O'Reilly wound up offering the standard weasel's apology: "If anyone felt I was demeaning all Muslims, I apologize."

It was disappointing to see Behar and Goldberg leave the stage. It's not that they weren't provoked; O'Reilly condescended to Behar, in particular. When she objected to O'Reilly's opposition to the center, declaring "This is America," the Fox bully told her, "Hold it, hold it, listen to me, because you'll learn." (I might have understood Behar walking off at that moment more than I did later.) And I'm not defending O'Reilly here; God knows he's treated many liberal guests with contempt, belittling them, even cutting their mics. Maybe there was a behind the scenes conflict over hosting O'Reilly on "The View" to begin with, and he came on the show over Behar and Goldberg's objection. But once he was on the set, they should have taken him down verbally, not walked away.

There was so much Behar and Goldberg could have said. They might have reminded O'Reilly that his own ancestors faced the same kind of bigotry Muslims do today, when they first tried to build churches in New York. I made this point in August, recalling the way the Know-Nothing party rioted and rampaged against Catholicism, burning down Catholic churches, schools and convents, from Massachusetts to Kentucky. Only last week, the New York Times told the story of Father Kevin Madigan, pastor of St. Peter's Catholic Church in Manhattan, who realized while researching his church's history that it had tragic parallels with the plight of the Park51 center. In the case of St. Peter's, Protestants who thought Catholics (especially the Irish) were idol-worshipping heathens loyal to a foreign despot, the Pope, protested the building of the first Catholic church in what was then the heart of Manhattan. The Catholics caved, and built their church outside city limits. But Protestants still objected. On Christmas Eve 1806, they surrounded the church to protest that holiday of "popish superstition" (yes, America, we brought you Christmas! And a Jew, Irving Berlin, wrote some of your favorite Christmas songs!) A riot erupted, dozens were injured and a policeman was killed. The admirable Father Madigan has been telling that story in letters to his parishioners and in sermons, but modern day Know Nothings like Bill O'Reilly apparently gotten the message.

Here's the Times story, and here's a wonderful essay about St. Peter's and the Park 51 Center by Father Tom Joyce from the Web site U.S. Catholics. It sickens me to see guys like O'Reilly (and my MSNBC debate partner Pat Buchanan) claim they speak for Irish American little guys, when they're wealthy pundits who have become mouthpieces for corporate America. I wish he'd been confronted with his own religious bigotry more effectively.

There were so many ways to own Bill O'Reilly in that debate. I wish Behar and Goldberg had hit him with passionate counter-argument, not mute outrage. I thought I'd be thrilled to see them rebuke O'Reilly by walking off. Instead I was sad to see them stop talking, since as I learned personally, that's what O'Reilly wants all liberal women to do.