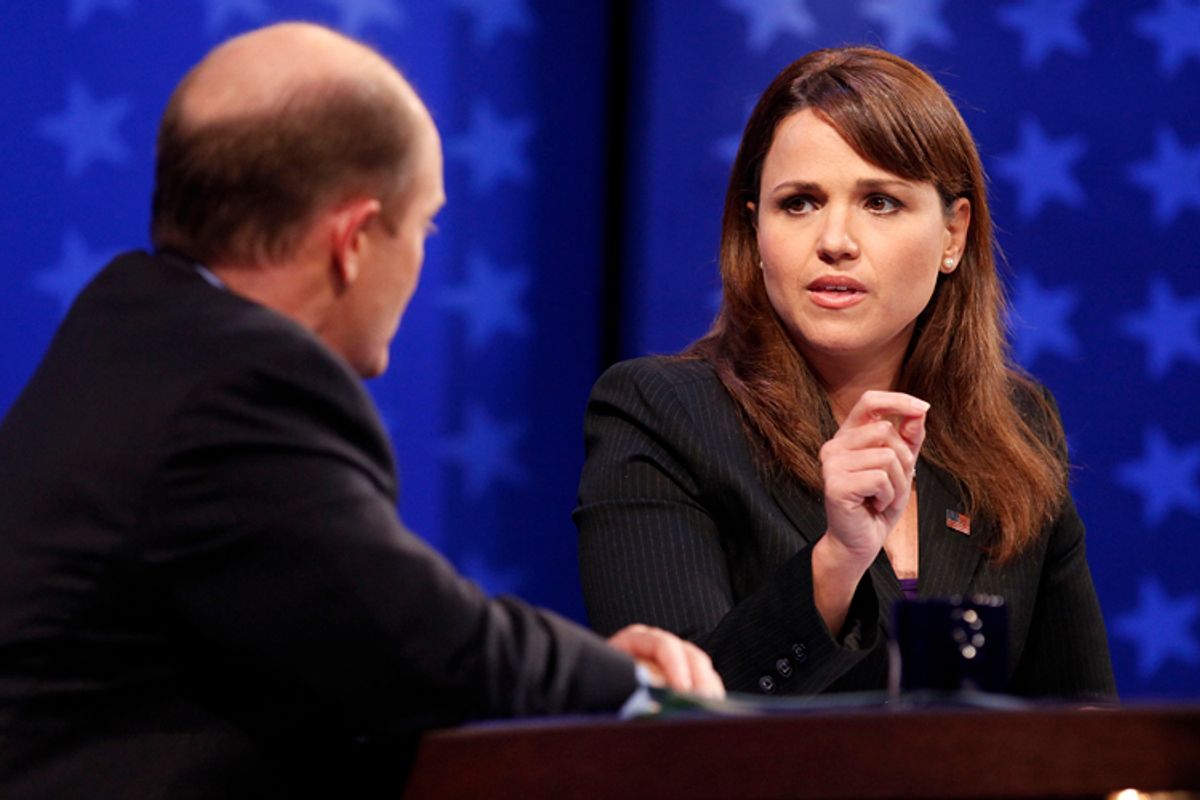 What can we say about Wednesday night’s U.S. Senate debate in a Delaware – an event momentous enough to warrant live national coverage on CNN, even though polls show Democrat Chris Coons is almost certain to defeat Republican Christine O’Donnell?

Well, it would be easy to point out the almost comical mismatch between the two candidates on policy grounds. On issue after issue, O’Donnell stuck with hollow platitudes, frequently contradicting herself when pressed for clarity. She called the national debt one of the country’s most pressing challenges, but then insisted that the Bush deficit-inflating tax cuts be extended across the board. Asked to identify specific budget cuts she’d support – and admonished not to cite the old standby of “waste, fraud and abuse” – she devoted more than half of her response to railing against “waste, fraud and abuse.” When Coons called for deporting some illegal immigrants, she claimed this put him at odds with the White House – even though deportations are actually up on under Obama. And on and on.

But O’Donnell is hardly the only Republican running in a closely-watched Senate race this year to be exposed as woefully ill-informed on policy – and many of them are probably on their way to victory anyway. Just look at the race in Wisconsin, where Democrat Russ Feingold schooled Ron Johnson in a debate earlier this week, even as polls show him falling hopelessly behind. We’d like to believe that elections are won and lost on policy, but they aren’t. So O’Donnell’s policy deficiencies didn’t lose her the debate, just as Coons’ effortless policy conversance didn’t win it for him.

Coming into Wednesday night, polls showed Coons leading by between 15 and 19 points. The most recent survey, from New Jersey’s Monmouth University, gave the Democrat a 57 to 38 percent advantage. That lead has nothing to do with policy, nothing to do with Coons’ campaign message, nothing to do with his strategy – and everything to do with the perception that O’Donnell is too flaky to hold major public office. That she is losing by such a wide margin in a year that is so poisonous to Democrats speaks to how profound her own liabilities are as a candidate.

Unlike many other Tea Party candidates around the country, then, it would not be enough for O’Donnell to show up and confidently recite platitudes during the debate. A candidate like Johnson in Wisconsin can get away with that because – at least for now – he meets swing voters’ basic threshold for competence; they are strongly inclined to back Republicans this year, and he’s good enough. But for O’Donnell, the key to Wednesday night was whether anything would be said (or whether any body language would be expressed) that might grab the attention of the media and create enough noise in the next few days (or weeks) to shake swing voters from their aversion to her. Would she be able to create some kind of breakthrough moment – or would Coons commit some kind of paralyzing gaffe?

When the 90-minute session was over, the answer was no on both fronts. To the extent any big story emerges from this debate, it will probably be O’Donnell’s decision to contrast her “Catholic faith” to Coons’ “Marxist belief.” The moment was the product of frustration on her part, as she tried to bat down questions from one of the moderators about her previous claims that she’d “dabbled into witchcraft” in her teen years. The basis for her claim that Coons has Marxist sympathies is essentially baseless -- a tongue-in-cheek newspaper column he wrote in college, but that doesn’t really matter. To swing voters, the headline “O’Donnell accuses Coons of being a Marxist” will surely reflect worse on her than him; they already suspect she’s unhinged – that she’d make such an extreme-sounding allegation on national television will only confirm that judgment. O’Donnell’s problem is that she makes too many voters uneasy, and to the extent her Marxist line dominates post-debate coverage, that problem will only get worse.

Besides that, there’s just not much to say. Coons was probably a bit too dismissive of O’Donnell at times, frequently prefacing his replies to her statements by shaking his head and marveling that “there’s just so much there” to respond to. Voters already see that O’Donnell as something of a lunatic; they don’t need Coons pointing it out to them over and over. But his stylistic sins were minor and he committed no major gaffes. Die-hard conservatives surely found plenty of ideological objections to Coons’ statements, but they’re already in O’Donnell’s camp.

O’Donnell, when she wasn’t talking about “waste, fraud and abuse” and Marxism, tried over and over to connect Coons to Obama, Harry Reid and the national Democratic Party -- bogeymen who are dragging down Democratic candidates in other states. But the swing voters who will decide Delaware’s election seem to have already decided that O’Donnell’s deficiencies outweigh their desire to vote Republican this year. It will take an awful lot to shake them from that position, and nothing that happened Wednesday will even come close to doing it.