When your restaurant's review has your mom crying

When a hilarious chef gets hammered by the N.Y. Times, he takes it well -- and blogs his mother's scolding e-mail 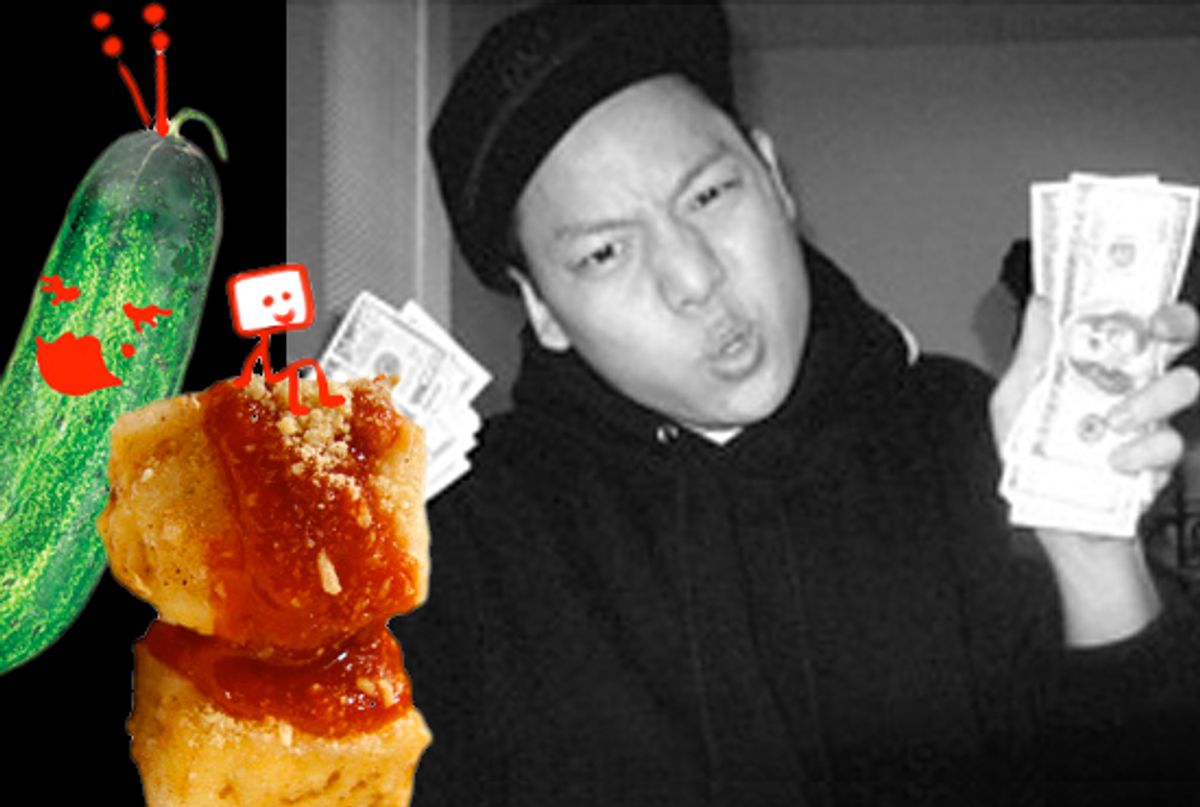 There isn't much of a proud history between restaurant critics and restaurateurs. I know critics who have been banned from restaurants, paid off, or even physically threatened. And there are restaurateurs who live in dark fear of certain critics and bully others. Restaurateurs can be an emotional lot, and you have to imagine that nothing quite riles like getting a rare zero-star drubbing of a review in the New York Times. So if, say, you are a millionaire magnate, you might respond to one by taking out a full page ad in that paper, an open letter dismissing the credibility of the critic. But would you, like Eddie Huang, chef and owner of the recently bruised-up Xiao Ye, take it like a grown man, declare the review a lesson to learn from, and post your mom's scolding email to you on your blog?

Yes, that happened yesterday, a fascinating – and hilarious – view into the mind of a young restaurateur and the way critics interact with the field and people they cover.

Huang is a young, brash chef, mostly famous for being a lippy kid with an ear for hip hop and a taste for the hilarious dis. Take, for instance, this response to people who complained about his charging four bucks for a bun that would be a dollar in their spiritual homeland:

I have to tell you that I am a fan of Eddie Huang. I mean, how can I -- a deep admirer of the Notorious BIG -- not love an ascendant chef who wears a shirt with Biggie's' classic lyric, "T-Bone steak, cheese eggs, and Welch's Grape" when the New York Times comes by for a photo shoot? "I was dressed for the occasion," he cracks.

Still, I can see where that wouldn't be considered the highest level of professionalism, and neither can the restaurant in question, which feels like an 18-year-old's playhouse. The walls are painted black, like a stoner's blacklight-ready rec room, and the walls are decked with photos of the chef taking rips off a homemade bong and other assorted things you wouldn't want your mother to see. (I once took my mother there. I prayed she wasn't looking.) The menu is laced with jokes best enjoyed while twisted, from hip hop references to what you might call teenage sex raps, and, breaking the ultimate taboo, scatological references. And the food, as described in Sam Sifton's review, has been hit-or-miss.

But it's because of all that posturing that Huang's response to the review is so impressive. He could've just said, "Hell, I've got packed tables every night because people wanna come party with me." But instead he took it standing up, as a challenge to improve, writing on his blog:

Who wants a star if you didn't earn it? I loved this review. Not just cause I like how Sifton gets the narrative at restaurants and that he didn't bash the vibe/culture… What hasn't happened in NY is a restaurant that is culturally committed to the youth and diverse. I accomplished that... When was the last time you saw the photo [of the restaurant being reviewed] and it was all people of color?

But, I'm going to change my attitude. I didn't know people expected more of me. I never thought I'd even be up for review with the NYT. I came out of nowhere, I'm twisted 5 days out of the week, and we had a lot of problems with opening. No excuses. It's on and poppin when I get back.

(Note, by the way, his keen observation of the lack of diversity in the NY restaurant "scene," at least as we portray it in the media. Huang is a joker, but definitely not a clown.) And then, in a move maybe unparalleled in the history of magnificent mea-culpas, he posted his own Mom's crushingly disappointed letter:

So what do you think about this review. I feel it is a review of your life. It sounds so familiar to The Food Net Work competition Judge's comments. I guess you never registered all the opinions from those professionals who have seen so many people working toward their success. There is a reason why the other guy won. Good taste, hardworking attitudes, great values. In our life, there is a lot of honesty does exist. The vast majority of public will give us a score that we deserve.

She continues to tell him to consider going back to being a lawyer.

Sure, it's a joke on his part to post it, with her typos and Chinglish intact. Reading this letter, you laugh at his audacity, but then Huang includes the line where Moms calls him out precisely on his joking bravado: "You have always tried to be different or funny for the sake of funny, to cover up your anger and discomforts…" I left the letter feeling touched by her concern and anxiety, and charmed by his combination of bulletproof façade and authentic vulnerability. When asked why he posted his mother's letter, Huang responded, "It honestly felt like [the review by Sifton was] my dad talking to me. Which is why I put up my mom's email. Dad speaks, then mom."

In the end, what's really lovely to me about this story is that you get the sense that there was a different kind of dynamic here at play than the average restaurateur-critic slamdance. Some restaurant critics view their role as professional palates. Some are consumer advocates. Some are tastemakers. And some, the best, are all these and yet also do more. They argue for the elevation of the quality, value, art, and culture of dining. They document the role of the restaurant in the life of the city. Rereading Sifton's review -- and his own blogging about it – there is a sense of respect and even affection for what Huang is trying, or not trying hard enough, to do. In this case it seems, the critic is playing the role of the wise OG, the tough love brother. You can imagine the wry smile behind the beatdown, the teeth-clenched command to Huang to step yo' game up.