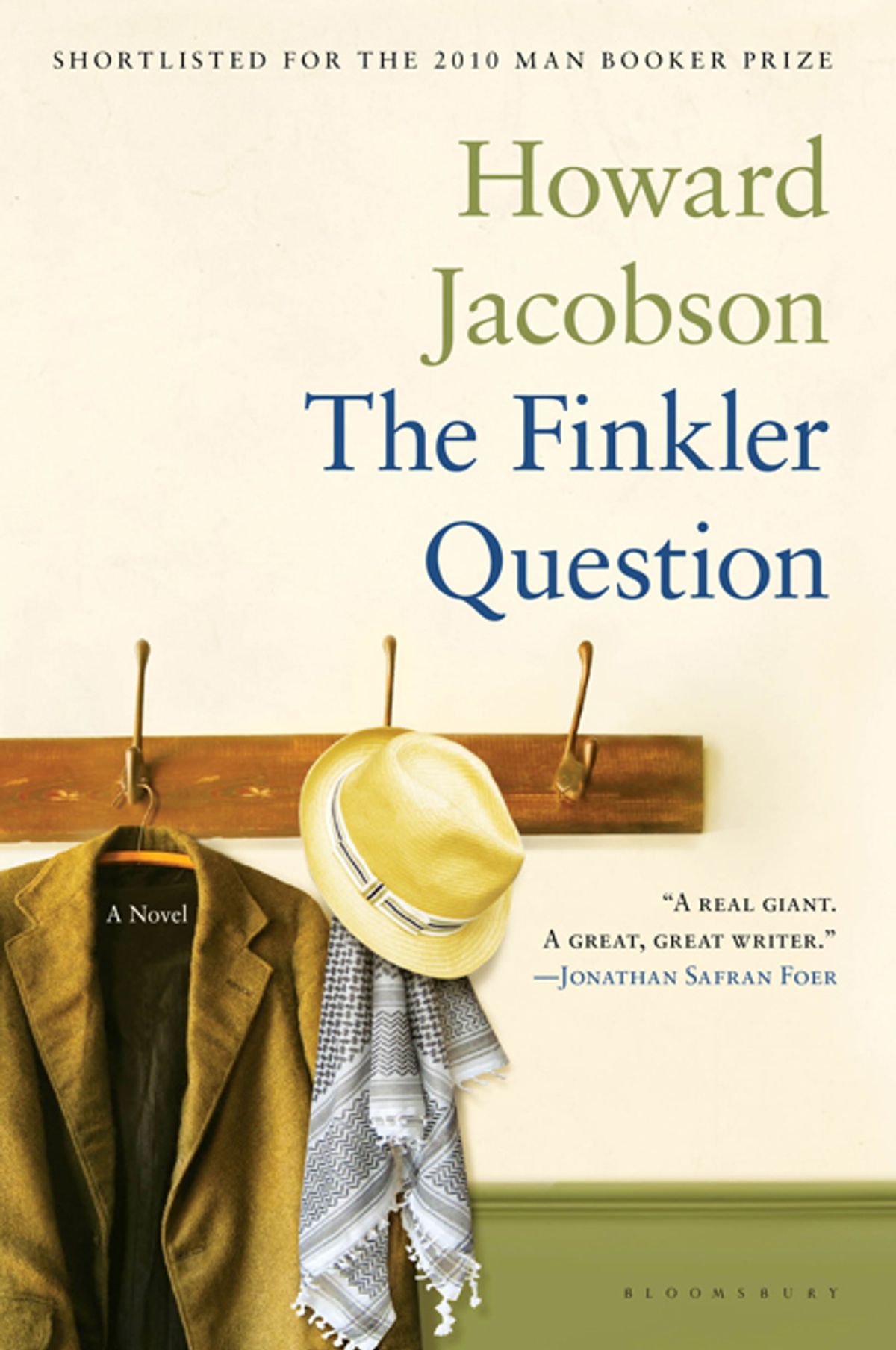 The Finkler Question by Howard Jacobson
--

When you begin reading Howard Jacobson's "The Finkler Question" -- just announced as this year's winner of the Man Booker Prize -- you may worry that you are headed into a polemic disguised as a novel. The characters spend a lot of time talking about Gaza, swastikas and "never forgetting." As you keep reading, however, the brilliance of the book comes clear: Jacobson is using the novel form precisely in order to help us limn these polarizing issues through the consciousness of a flawed character as an excuse, freeing himself -- and us  -- from the conventions of argumentation.

Although strong positions on Israel, Zionism and anti-Semitism comprise the bulk of this talky book, they are expressed through characters who each, eventually, change their minds. More impressively, behind these characters it is impossible to find any puppet master. You cannot deduce an authorial stance, only evidence of a frighteningly smart and insightful thinker and stylist. Jacobson -- an established British author who has been terribly under-known this side of the pond -- has written a brave book. Even more welcome, he has written a seriously funny one.

Jacobson exploits the nonthreatening veneer of a novel -- "it's just a story" -- to make fun of everybody, defusing with an appealing lightness the heady political discussions the characters cannot stop themselves from having. "I wonder whether we feel nothing," says a main character about Jews, "precisely because we rehearse our feelings on the subject too freely and too often?" "Crying Wolfowitz, you mean?" responds another character, "with a wild laugh."

The novel revolves around Julian Treslove, a former BBC producer turned celebrity look-alike. Treslove is a textbook Romantic: he longs for an Ophelia, a lover who will die young and beautiful, so he can mourn her. His daydreams end this way: "The curtain always came down on Treslove's fantasy of happiness with him crying 'Mimi!' or 'Violetta!' and kissing the cold dead lips a last goodbye that would leave him inconsolable forever." It's not much of a surprise that Treslove has never married, but has instead been involved with a string of women whose names all begin with "Ju" (or, as he later wonders, "Jew"), the only syllable he could hear a psychic utter when he had his romantic fortunes foretold.

Julian Treslove (or, perhaps, "Jewlian Very Love") was childhood friends with Sam Finkler. Finkler was the first Jew Treslove ever met, and Finkler did not quite live up to the stereotype. Then, "he supposed a Jew would be like the word Jew -- small and dark and beetling." The two develop an intensely homosocial relationship straight from the British school-chums genre, but with a twist. For Treslove, Finkler represents the mysterious, desirable Other; he represents Jews, that is. Hence the novel's title: Since he first met his first Jew, Treslove has called all Jews Finklers -- but only to himself, wondering and mulling the age-old question of what it means to be Finkler.

Finkler, meanwhile, grows up to become a hugely successful pop philosopher, writing self-help books such as "The Socratic Flirt: How to Reason Your Way into a Better Sex Life." Raised Orthodox, Finkler has fallen away from any faith, and is so anti-Zionist Treslove wonders if he is at heart anti-Semitic. When Finklers's wife, Tyler, a convert, dies young, Finkler mourns -- as Jews always are doing, at least in Treslove's romantic imagination -- but he also feels guilty (perhaps also as Jews are always doing). Finkler was an inconstant, distracted husband, is still a poor father, and spends his nights with zaftig Jewish mistresses or playing online poker. He holds the most outrageous political views in the book, and he is also the least likable member of a cast of characters who, although fascinating, are not always sympathetic. He is the kind of person who, at a restaurant, always asks the waiters for more hot water, "no matter how much hot water had already been brought. It was his way of asserting power, Treslove thought. No doubt Nietzsche, too, ordered more hot water than he needed."

Finkler is also, of course, very funny. Treslove endlessly and unsuccessfully tries to crack the code of Finkler humor. It is all in wordplay, he concludes, but you also have to time the linguistic cleverness correctly. Poor Waspy Julian's jokes are usually met with confused stares.

Treslove and Finkler are also linked by a mutual teacher from their childhood, now recently widowed and bereft, named Libor Sevcik, a Czech who has become, of all things, a celebrity journalist. With this trio of lost, mourning men at the center of the story, Jacobson sets himself a tough task. How will a novel in which these men meet, talk and fight about Gaza be engaging? Somehow Jacobson makes it work, in no small part because it's funny.

Whenever the three get together, Libor and Finkler debate the state of Israel. Libor always pronounced it "Isrrrae." Treslove analyzes his pronunciation: "Whenever Libor said the word Israel he sounded the 'r' as though there were three of them and let the 'l' fall away to suggest that the place belonged to the Almighty and he couldn't bring himself fully to pronounce it. Finklers were like that with language, Treslove understood. When they weren't playing with it they were ascribing holy properties to it." Finkler, on the other hand, refuses to pronounce the word at all, calling the country Palestine: he "spit out Israel-associated words like Zionist and Tel Aviv and Knesset as though they were curses."

Treslove mainly listens and envies the witty, headstrong Finklers. After Finkler and Libor become widowers, Treslove is only more jealous: now they have even greater tragic auras! Finkler, in turn, always competes with Treslove, and perhaps wishing for himself a less troubled past, envies Libor his memories of a better marriage, and therefore his greater share of grief.

The action that sets the plot into motion is hilariously inconsequential: Treslove is mugged. The improbable consequence is his decision to convert to Judaism. He learns Yiddish, a language Finkler considers "the lost provincial overexpressiveness" of his Orthodox father. He visits a blogger who is trying to grow his foreskin back to discuss circumcision and sexual pleasure. What was his "Jewish thing" really? asks the Jewish woman he falls in love with. "A search for some identity that came with more inwrought despondence than he could manufacture out of his own gene pool? Did he want the whole fucking Jewish catastrophe?"

With anti-Semitic attacks on the rise in London, Libor also undergoes a change of heart, as all the English Jews find themselves wondering of a swastika here or a smear of bacon grease there, "Was it something or was it nothing?" As the debates migrate from past times or faraway places to the streets of the diaspora, the characters all find themselves surprised by their own reactions.

Rare is a work of fiction that takes on the most controversial issues facing Jews so directly -- and with enough humor, intelligence and insight -- that it changes a reader's mind. Be warned: "The Finkler Question" will probably distress you on its way to disarming you. Can we pay a novel any greater compliment?