The long shot in Central Asia 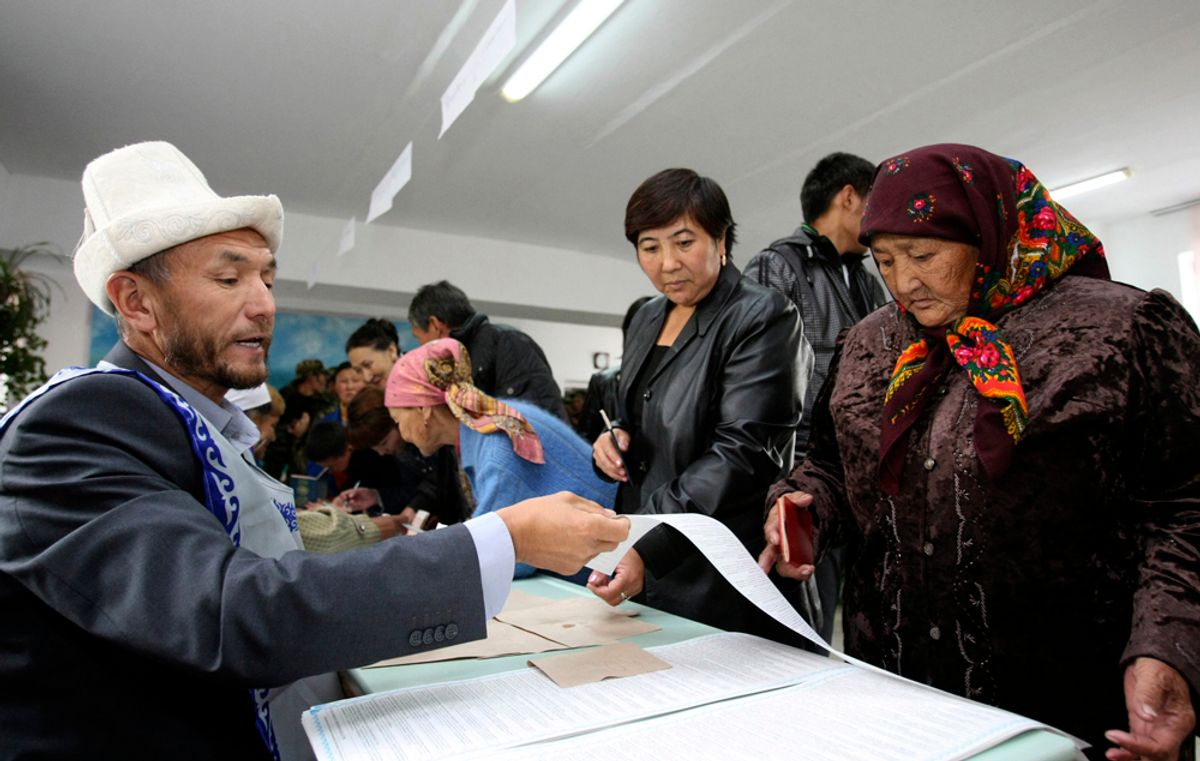 A woman receives ballot papers at a polling station during parliamentary elections in the village of Koy-Tash, some 15 km (9 miles) south-east from Bishkek, October 10, 2010. Kyrgyz voters cast their ballots on Sunday to create the first parliamentary democracy in Central Asia, in an election many hope can unite the country only four months after the worst bloodshed in its modern history. REUTERS/Vladimir Pirogov (KYRGYZSTAN - Tags: POLITICS ELECTIONS) (Â© Vladimir Pirogov / Reuters)
--

Betting on democratization in Kyrgyzstan may seem a fool's errand. What chance is there for competitive politics in a poor, remote country that in recent months has experienced the overthrow of a president, an abortive restorationist coup and a massive outbreak of interethnic violence? Against all odds, Kyrgyzstan has thus far confounded the skeptics. In late June, it conducted a successful constitutional referendum, and on Sunday the citizens of Kyrgyzstan gave their verdict in a hotly contested parliamentary campaign, which was widely recognized as the fairest election in the history of Central Asia. In President Obama's words, the people of Kyrgyzstan "demonstrated by their participation in [Sunday's] historic election that they are committed to selecting their government through peaceful, democratic means."

Now that the voters have spoken, and the field of 29 parties has been winnowed down to five (or six, depending on the results of the recount currently underway), the focus is shifting to the formation of a coalition government and the selection of a prime minister. Moscow and Washington clearly have their preferences for which parties should unite to govern Central Asia's first parliamentary republic. Russia bet heavily on the success of Felix Kulov's party, which only finished in third place, while many in the West were disappointed that the Kyrgyz nationalist party, Ata-Jurt, emerged as the leading vote-getter. But given the small margin separating all the parties that will have seats in parliament, there is no certainty that the Kyrgyz nationalists, whose ranks include many allies of the deposed president, will be included in the new government. Even if they do join the government, the fragmentation of parties and the safeguards built into the new constitution will serve as impediments to the re-concentration of political power in Kyrgyzstan.

Among the most important of these checks and balances is the division of responsibilities between the president and prime minister. The current president, Roza Otunbaeva, is a mature and uncorrupted leader whose control over security and law enforcement bodies will discourage less fair-minded politicians from enlisting police and prosecution to advance personal or partisan interests. In addition, the rules of the parliament in Kyrgyzstan are designed to protect the interests of minority parties -- some would say at the expense of the body's efficiency. In the new parliament, the opposition parties will select the chairs of the two most important committees, those on the budget and law and order. In short, political institutions and the balance of political forces in Kyrgyzstan invite compromise, which is at the heart of open and pluralistic politics.

In all the commentary about the election in Kyrgyzstan and abroad, one important point has been overlooked. Even though strong personalities lead Kyrgyzstan’s parties, the demands of parliamentary government will begin to shift the focus away from individual politicians and toward parties. Such a shift is needed if Kyrgyzstan is to build a political system based on predictable and permanent institutions rather than the vagaries of personality-based politics. Sunday's election also brought a shakeup of the party system itself, with the abysmal showing of the Communist Party of Kyrgyzstan marking the demise of this Soviet legacy institution, almost two decades after the collapse of the USSR.

We should have no illusions. The road toward democratic consolidation in Kyrgyzstan will not be easy. The new government inherits a society that is deeply divided along regional and ethnic lines. Social stability depends heavily on the safety valve of labor migration to Russia and Kazakhstan. Corruption is widespread in the political elite, and some prominent politicians favor a return to the closed, super-presidential regime that is the norm in Central Asia.

The Kyrgyzstanis will need to overcome most of these challenges themselves, but there is a role for the United States and the West in serving as a counter-balance to the larger and more authoritarian countries in the region, which want Kyrgyzstan's democratic experiment to fail. Worried that a democratic government in Kyrgyzstan would embolden the Russian opposition, President Medvedev has for months expressed his displeasure with Kyrgyzstan's choice of a parliamentary republic. With countries such as Russia, Kazakhstan and Uzbekistan in mind, Omurbek Tekebaev, the leader of the most pro-Western party to gain seats, stated earlier this week that Kyrgyzstan would be able to put its house in order if there is no "external interference." The recent broadening of the American approach to Kyrgyzstan to include democracy-building as well as military concerns signals to Kyrgyzstan's neighbors that the United States will look with disfavor on such external interference.

With the election over, the even more difficult task of governing begins. Political leaders who have in the past found it difficult to cooperate with each other must work together to form a stable government and to address the many pressing issues of state, including whether Kyrgyzstan will continue to provide basing rights to both the United States and Russia. The nationalist rhetoric employed during the campaign, most notably by the Ata-Jurt Party, must give way to a more responsible discourse of governance, which values the contributions made by all groups in Kyrgyzstani society. How the newly-elected leaders adapt in the coming weeks to their roles in government and opposition will be an important test of whether Kyrgyzstan is capable of keeping the republic that was forged this year in the midst of rebellion and tragedy.

Baktybek Abdrisaev, the former ambassador of the Kyrgyz Republic to the United States, is on the faculty at Utah Valley University. In the wake of the April revolution in Kyrgyzstan, Abdrisaev and Huskey testified before Congress on the Western military base at Manas, outside the Kyrgyzstani capital.

Eugene Huskey is William R. Kenan, Jr. Professor of Political Science and Director of Russian Studies at Stetson University in DeLand, Florida. The author of more than a dozen articles and book chapters on Kyrgyzstan, he spent five weeks during the last two years in Kyrgyzstan interviewing members of the opposition.