White House wants "don't ask, don't tell" to remain law while it seeks to overturn it 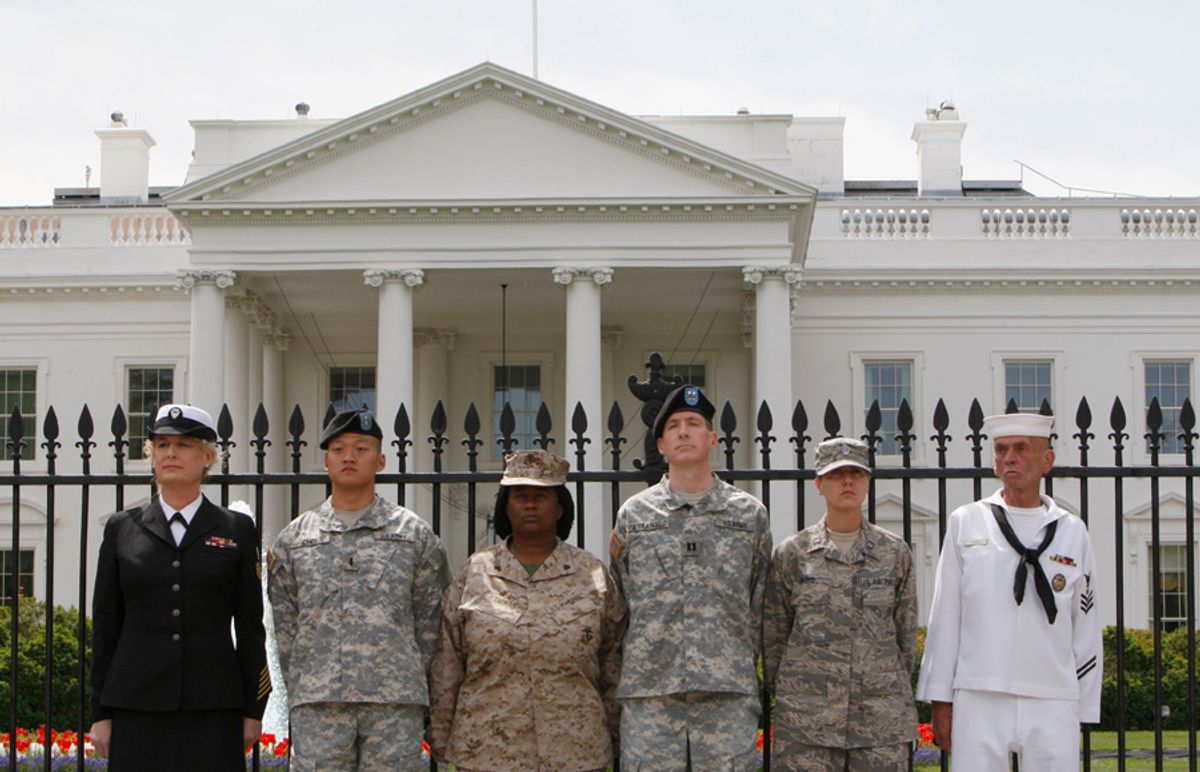 FILE - In this Tuesday, April 16, 2010 picture, from left, Petty Officer Autumn Sandeen, Lt. Dan Choi, Cpl. Evelyn Thomas, Capt. Jim Pietrangelo II, Cadet Mara Boyd and Petty Officer Larry Whitt, stand together after they handcuffed themselves to the fence outside the White House in Washington during a protest for gay rights. A federal judge issued a worldwide injunction Tuesday stopping enforcement of the "don't ask, don't tell" policy, ending the military's 17-year-old ban on openly gay troops. U.S. District Judge Virginia Phillips declared the law unconstitutional after a two-week nonjury trial on the case in federal court in Riverside. U.S. Department of Justice attorneys have 60 days to appeal. Legal experts say they are under no legal obligation to do so and could let Phillips' ruling stand. (AP Photo/Pablo Martinez Monsivais) (Pablo Martinez Monsivais)
--

This week, U.S. District Judge Virginia Phillips ordered the military to stop enforcing "don't ask, don't tell," the 17-year-old law that forces gay soldiers to remain in the closet. Barack Obama campaigned on ending the ban, and he seems to think that he is doing a really good job of ending it, but his Justice Department has asked Judge Phillips to stay her ruling while they appeal her decision. If Phillips doesn't stay her order, the administration will ask the Ninth Circuit Court of Appeals for a temporary stay.

Marc Ambinder says that there are three competing schools of thought in the White House on how to deal with this ruling. One group thinks Obama has to get the Pentagon on board before DADT can be repealed and the Pentagon will get all cranky if the courts make them stop kicking out the gays before they are good and ready to join the rest of the modern world. Another group thinks Obama should appeal but also order the Defense Department to stop all DADT-related activity. This group apparently thinks a plan of action that pleases no one at all is the best plan of all.

And then there are the people who are right:

And then there's a group of advisors who appear to be as fed up with the maneuvering as Rachel Maddow is, and who want the president to make a public statement effectively saying, "Enough is enough. We've done this as orderly as we can. We can't control everything. But the policy is dead, as of today." Even under this scenario, gay soldiers wouldn't have access to spousal benefits just yet -- the DoD does need time to figure out how it would all work.

Obama apparently sided with the second group of advisors.

Ambinder also says Obama gets upset when DADT protesters heckle him, because, again, no one understands that he is doing everything he possibly can under the circumstances, and those dumb activists don't understand political realities.

The president is apparently convinced that he needs to do this the "right" way -- by getting the Pentagon to acquiesce, then having Congress officially repeal it. But it's already failed in the Senate -- because of Harry Reid's horrible maneuvering and because of the 60-vote requirement and because of those awful, awful women from Maine and because the Senate is broken. Meanwhile, the Pentagon is more than happy to undermine Obama and play the press against him. There's no reason to believe that they'll fall in line once they're done with their "review" in December.

If Obama actually thinks "don't ask, don't tell" is a bad policy that should be overturned, he was just handed a gift -- a way to get rid of the policy without issuing an executive order or attempting to corral a lame duck congress. But he seems to worship the "correct" process so much that he's willing to delay, or doom, the desired result.