Back on Earth-1, the latest mission threatens to reveal Alt-livia's true identity 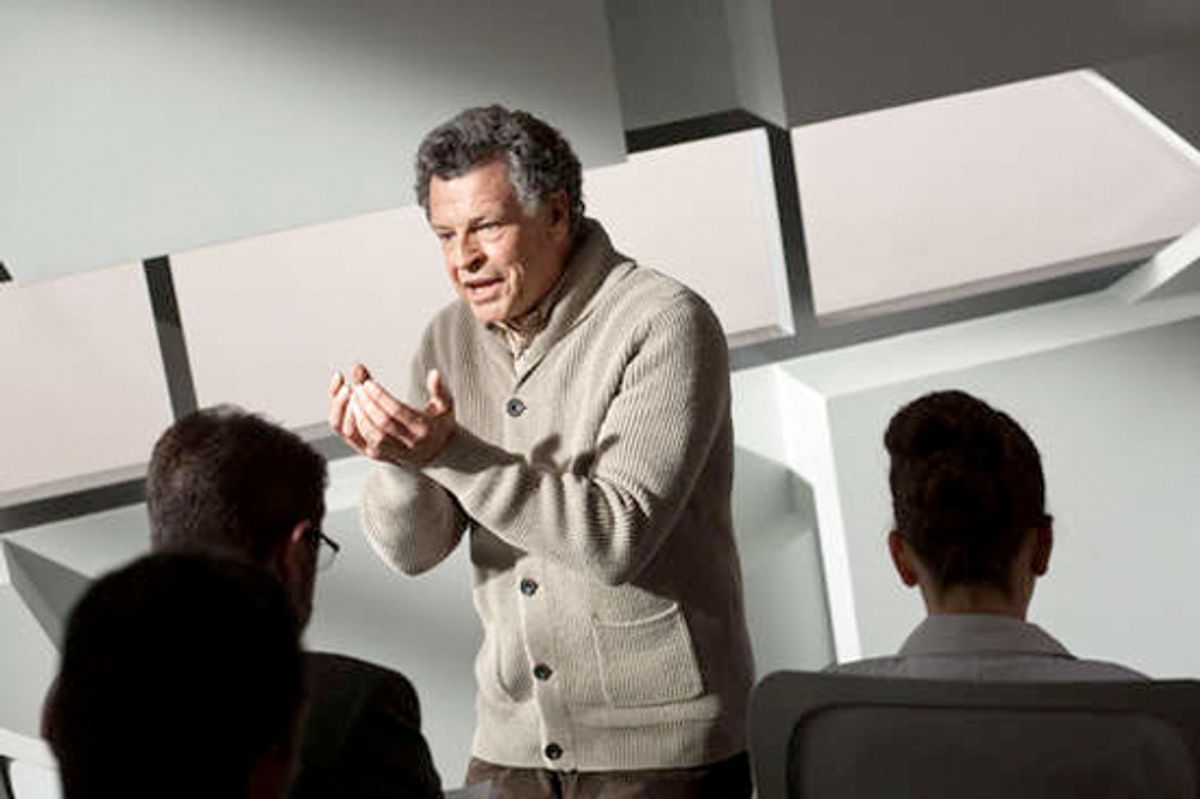 Tonight's episode is entitled "Do Shapeshifters Dream of Electric Sheep?" and much like the Philip K. Dick story that inspired the title, the episode is concerned with the question of what it means to be human. The episode explores the notion that faking an emotion for long enough can have the effect of causing an actual real emotion to form, even in the most hardened of hearts (synthetic or otherwise). It brings up the question: Who is more human here? The artificial Ray, who sincerely felt love for his family, or the organic Alt-livia, who can only fake affection for Peter and who uses the appearance of emotion to forward her own sinister goals?

In Dick's story, because the androids lacked empathy, their responses were noticeably slow and emotions could only be feigned at best. Ironically, in the "Fringe" universe, it's the flesh-and-blood Alt-livia who best fits this description, not the synthetic shapeshifters. While Thomas Newton is able to remain emotionally detached from the meatballs around him, other shapeshifters under deep cover on Earth-1 aren't so lucky. This episode introduces two shifters who, having been under deep cover in a single identity for years, have formed actual emotional attachments to the people in their lives.

This week's "Fringe" returns us back to the blue universe of Earth-1. Peter and Olivia are at dinner playing the game where you invent stories for what the other couples in the restaurant might be up to. At one point Peter mentions that another couple in the restaurant are clearly working up to their first intimate moment. There's some awkward glances between Peter and Alt-livia at this. Alt-livia knows where this is going and she doesn't look happy about it. She has a mini freak out in the ladies room, though it's unclear whether she's bothered by the thought of developing feelings for Peter or is just grossed out by the idea of having sex with him.

We cut to a scene with the good Dennis Van Horn: U.S. senator, loving husband to Patricia, good friend to one Philip Broyles, and newly revealed shapeshifter. We've seen Van Horn in previous episodes, so it's quite shocking to realize that this whole time he's been working for Walternate and Newton. I suppose it goes a long way towards explaining his involvement with Fringe division. In any case, this is the last we'll see of Senator Van Horn, as he is gravely injured in a car crash, and then Thomas Newton shows up to murder both Van Horn and about a dozen other people at the hospital where he's being treated.

Meanwhile across town, new CEO Walter Bishop is busy holding court with the scientists of Massive Dynamic. Walter horrifies the crowd with some inappropriate touching and spontaneous stripping. I guess these eggheads are more used to a boss who takes his morning coffee with a dash of Splenda, versus a massive dose of hallucinogens. Peter and Nina Sharp laugh at the whole thing, because that is, like, so Walter. Luckily for the HR department of Massive Dynamic, Walter and Peter are summoned away to deal with the Van Horn situation before it can get too sexually harrass-y in the room.

Fringe team gets debriefed by Broyles, who is pretty upset that he fell for Van Horn's doppleganger. Alt-livia is pretty upset too, but for a different reason: She's got this expression on her face that screams, "Curse these fool minions! Must I do everything myself?" While Walter and Peter work the body, Alt-livia goes off to grill Newton via cell phone about what Van Horn knew. Newton gives Alt-livia a lot of sassy attitude, as he questions her commitment to the cause and intimates that Peter Bishop probably suspects that she's not his Olivia, before admitting that Van Horn pretty much knew all about Alt-livia's mission and was in fact the one who compiled the "Idiot's Guide to Being Olivia Dunham" file that she was studying.

Walter is already starting to get a crazy, not good gleam in his eye when he talks about using the resources of Massive Dynamic to reanimate the shapeshifter. Alt-livia comes in just in time to see the shapeshifter start to twitch back to life. The naked panic on her face is crazy -- I half expected her to whip out her gun and murder everyone right then and there. While that would have been amusing, I suppose it would not have boded well for future seasons of the show.

Astrid "Astro" Farnsworth shows up at Massive Dynamic with a box full of Walter's things. Key items include a strip of candy dots, an issue of "Hump" magazine and a framed photo of George W. Bush. Feel free to insert your own dirty masturbation-related joke in here. There's what appears to be a throw away line about how Walter finally gets Astrid's name right, but you could certainly make a case that there are subtle hints that Walter is already being changed by taking over Massive Dynamic. In the previous scene he was clearly thrilled by the power at his fingertips now that he owns Massive Dynamic. If he pretends to be like William Bell, does that mean he will actually end up like him -- coherent enough to finally remember the help's names, but also prone to the same ethically gray scientific practices?

Alt-livia and Peter head off to investigate the Senator's office. Or rather Peter investigates while Alt-livia is frantically trying to hide any incriminating evidence. A little misdirection occurs when Peter pulls out a locked box that has Olivia's picture in it, and you think maybe the jig is up for Alt-livia. But then it's revealed that the entire Fringe team has dossiers in the box. Alt-livia looks relieved, but also a little disappointed that she didn't get an excuse to shoot Peter in the face.

Ray the shapeshifter gets activated by Newton. Newton orders him to get Van Horn's body back and then take a new identity. He makes an ominous statement that Ray should leave "no traces left behind," which probably doesn't bode well for his wife and young son.

Walter briefs the Fringe team on his theory that pretending to have feelings caused real ones to form for Van Horn. There's a fairly unsubtle cut to Alt-livia as that line is uttered. Alt-livia tries to derail this train of thought, but she is just the worst actress ever (Alt-livia that is, not Anna Torv, who is absolutely killing it this season) so she fails. The team decides to go ahead with the plan to bring in the senator's wife to jog his mercury-powered memories.

Back from commercial, Ray the shifter clearly has doubts about his mission. There's some interplay with the son and a parable about monsters with hearts of gold and it's all very sad. Pity the poor shapeshifters, with their tiny butt-brains and giant throbbing mercury hearts.

Patricia Van Horn helps the team and agrees talk to her husband. He pops back to life, but only to rattle off a series of places he had planned to go with his wife on their anniversary. Again, Alt-livia is spared the need to commit mass murder, as Walter sadly declares that there's no way to recover Van Horn's memories.

Alt-livia gets a text from Ray notifying her to clear the building, because the killin' is about to start. She thoughtfully takes the Fringe team with her, distracting Walter with promises of cafeteria food. Unfortunately, after Walter is left alone with Astrid, banter about animals crackers leads into talk about dinosaurs talk which leads to Walter getting a brilliant idea about how to recover Van Horn's memory. Did you know that the stegosaurus had a brain above its butt? Well, you do now. In his rush to get back to the lab to test his butt-brain theory, he ends up on the same elevator as Ray.

Peter is totally being a chick here, as he calls out Alt-livia on being different lately. Unfortunately, Peter just thinks it's a result of whatever Alt-livia saw on the other side, versus him actually figuring out that in a universe filled with shapeshifters and doppelgangers, you might want to be a little more suspicious about that sort of behavior. God, Peter. At this point, I'm predicting that Olivia's eight year old niece will assemble this puzzle before the allegedly brilliant Peter Bishop. In any case, this line of inquiry has to wait, because they realize with alarm that Walter has disappeared.

Ray tussles with Walter in the lab and absconds with the memory disk. While Peter tends to his father, Alt-livia halfheartedly pretends to give chase. She probably just stands outside the office stomping her feet so that it sounds like she's running off in the distance.

Ray heads home, where Newton tricks him into revealing that he had no intention of giving up his family. Again, it's sad and ironic -- Ray's spent his whole existence as a shapeshifter feigning real emotion in order to pass, and yet in the end it's his inability to hide emotion that is his undoing. Newton shoots Ray in the head and shoves his body in the trunk. Peter and Alt-livia show up just in time to get into a car chase with him. Did you know that the Ford Taurus is an excellent vehicle for driving on wet surfaces, making quick evasive maneuvers and running down errant shapeshifters? Because it is.

Newton wrecks because he is not driving the excellent Ford Taurus, and Alt-livia scurries overs to search his unconscious body while Peter calls for backup. She retrieves the memory module at the last minute.

Later Alt-livia visits Newton in prison and slips him the shapeshifter version of a cyanide capsule. See ya, Newton -- it was nice knowing you. Before he offs himself, Newton again mocks Alt-livia about her emotions and how they will prevent her from completing her mission. Alt-livia looks disturbed as she walks away from Newton.

The next thing we know, she texts Peter to come over and then promptly seduces him when he shows up at her apartment. No, Peter, don't do it! There's melancholy music on the soundtrack, as scenes of Alt-livia and Peter getting busy are intercut with scenes of Newton dying, his silver brains slowly leaking away, just like the last of Alt-livia's morals.

This was a very thought-provoking episode, with some major implications for Peter and Olivia's relationship moving forward. However, I'm a little tired of the constant ping-ponging between Earth-1 and Earth-2 every week. It's starting to disrupt the narrative -- just when you start to get into the groove of what's happening with the team in one reality, you're forced to shift focus the next week to the parallel plots of other universe and you lose some of the momentum gained from the episode you just saw. This is about to be compounded by the fact that now it's time for playoff baseball on FOX (go Yankees!), which means new no "Fringe" until November. During the break I'm going to watch the Earth-1 and Earth-2 episodes together, to see if it flows better. I suspect it will.

Summary: Careful -- that twinkle in your lover's eye might just be his mercury blood catching the light just so.