The imperial defense of Pentagon bloat 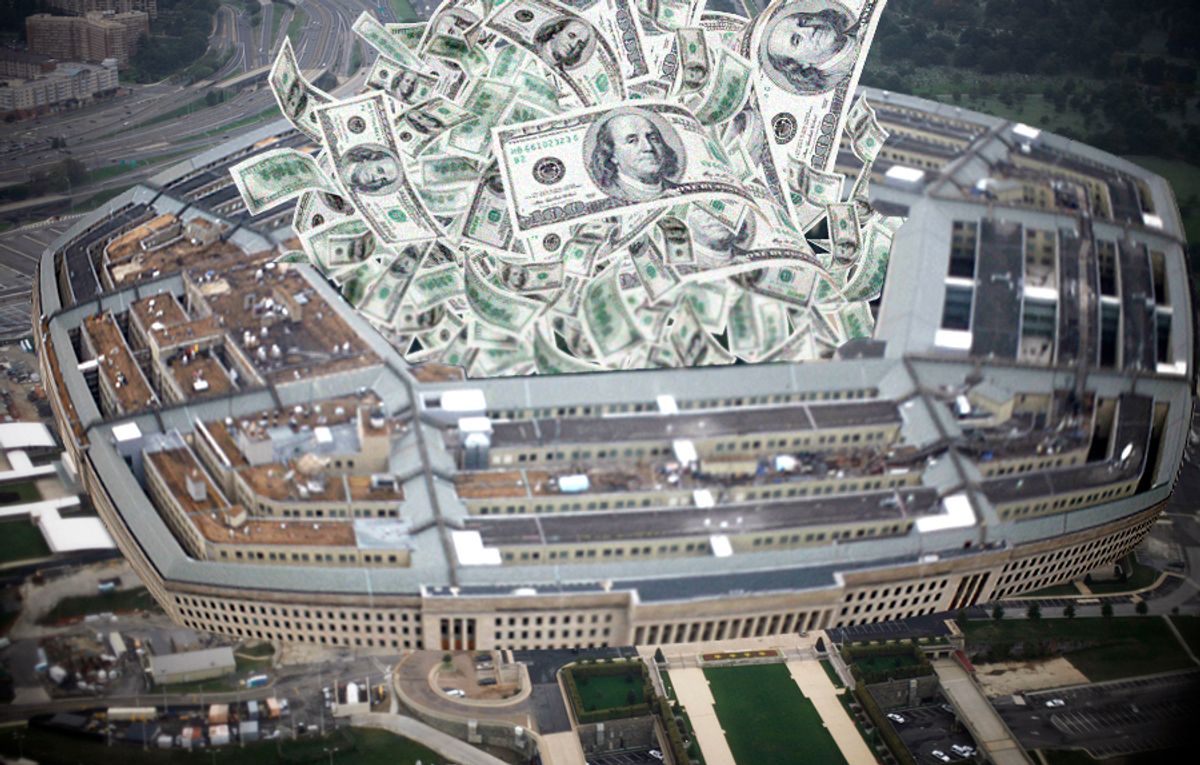 Beware the sophistry of budget talking points -- especially those seeking to deter any criticism of defense spending.

That's the lesson of these last few weeks, as establishment Republicans desperately try to thwart both progressives and Tea Party conservatives who are pressuring Congress to reduce Pentagon bloat.

The latest talking point du jour has been around in one form or another for years. It asks us to forget that A) America spends more on defense than every other major nation combined and B) the Pentagon, whose annual budget is now approaching World War II levels in inflation-adjusted terms, has lost track of trillions of taxpayer dollars. In light of those troubling truths, we are nonetheless urged by Beltway Republicans to focus on the fact that defense spending is "4.9 percent of our gross domestic product, significantly below the average of 6.5 percent since World War II," as a recent Wall Street Journal editorial proclaimed.

That widely circulated article, aimed squarely at grassroots conservatives, was jointly written by three of the most influential Republican think tanks in Washington -- the Heritage Foundation, the American Enterprise Institute and the Foreign Policy Initiative. And like clockwork, the "percentage of GDP" nugget went from their pen to the GOP's well-oiled media machine.

Within days, RedState.com was bewailing supposedly "historically low (defense) spending" and citing the GDP talking point as a "rallying call." The American Spectator magazine, meanwhile, held up the op-ed as an "important reminder to new Republican congressmen" to refrain from "shortchang(ing) both our troops and American national security." Not surprisingly, that's when the "percentage of GDP" stat began being loyally parroted by establishment Republican voices on talk radio.

At one level, the GDP line is designed to simply avert attention from the $700 billion annual defense bill being, well, $700 billion. That's not only a massive sum, but also comparatively exorbitant. Yes, the Pentagon budget is so outsized that according to former Reagan Pentagon official Larry Korb, "(E)ven if the United States were to cut its (defense) spending in half it would still be spending more than its current and potential adversaries."

But, then, discussing defense spending in GDP argot is more than just distracting. It's dangerously incoherent, or just plain dangerous, because the language implies that military expenditures must increase as the economy expands.

Think about it: From a strictly defensive, protect-the-nation perspective, that assumption makes no sense.

"Does a more prosperous economy increase the risk that we will be attacked by a foreign power or by a terrorist group?" writes Slate's Tim Noah. "Of course not."

This is true, except in one disturbing case: if -- but only if -- we assume the economy should grow primarily as a consequence of military dominance.

Herein lies the truly "dangerous" part of the GDP mantra. If Republicans in Washington believe American economic growth should be based on the United States militarily subjugating and exploiting foreign countries, then those Republicans can logically (if abhorrently) insist that Pentagon spending must remain a constant percentage of GDP.

Most elites in the GOP establishment, of course, would never openly admit to believing that our economy should be based on hegemonic conquest. We know this because the GOP establishment expressed unanimous outrage at anyone even vaguely suggesting that America wages war for energy resources.

But maybe that's the unspoken admission in the GDP-themed push for more military expenditures. Perhaps for all of the GOP's outrage at war-for-oil allegations, the Republicans' defense spending rhetoric exposes their truly imperial vision -- one that even the slickest talking points can no longer hide.