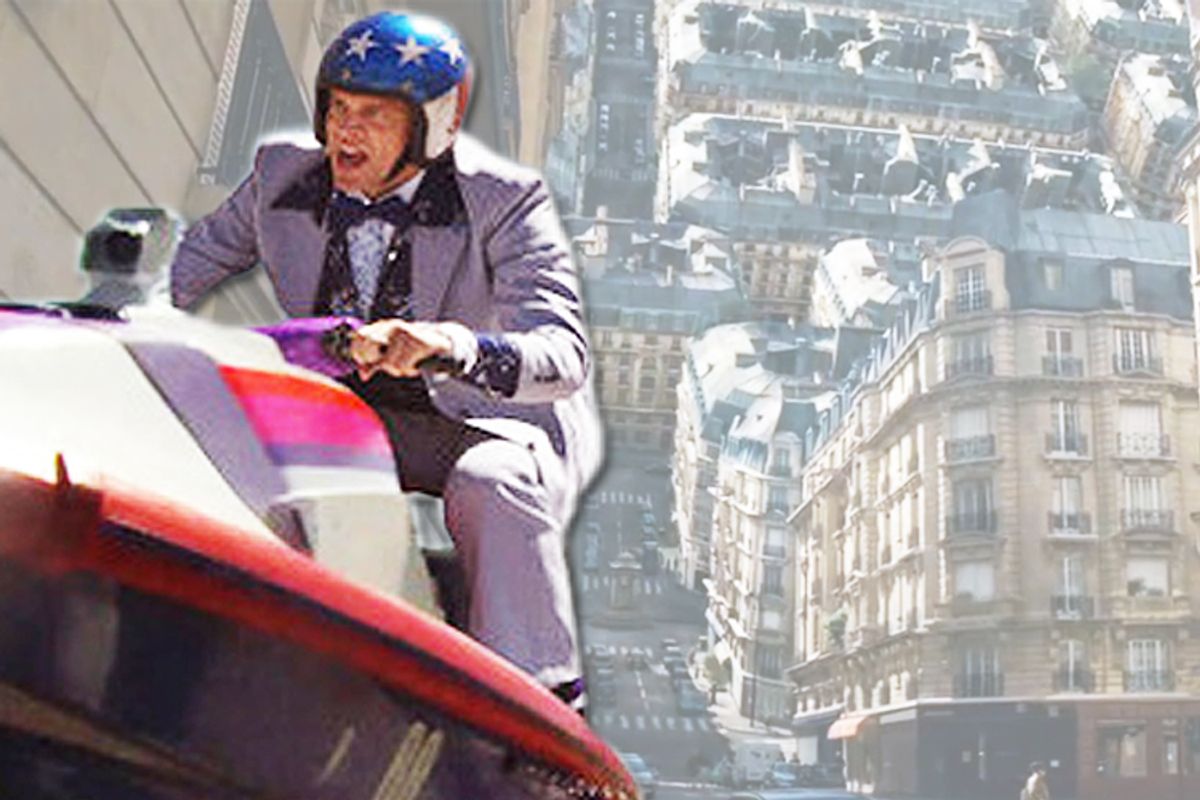 It seems absurd to worry about spoiling a movie with no discernible plot, but Paramount kept "Jackass 3D" away from most critics until 10 p.m. EST last night, ensuring that word of the film's outlandish, common sense-defying stunts would not leak out until opening day. Holding a film until the last minute is a tactic studios usually reserve for stinkers, ensuring at least a half-day of unblemished box office returns before the scathing notices start to pour in. But while they're hardly consensus favorites, the "Jackass" movies have garnered a substantial critical following. At this point, the naysayers' outrage has been dulled by repetition, and critics who might have been afraid to admit they cracked a smile at the first movie's lowbrow shenanigans can breathe easier knowing they've got friends in high places.

The issue is not buzz, bad or otherwise, but letting the cat out of the bag. Even more so than a twist-driven movie like "Inception," "Jackass 3D" plays best when you don't know what's coming next. One of the running gags threaded throughout the movie is what's termed "The Rocky," wherein jackass Bam Margera sneaks up behind an unsuspecting target, throws a cup of water in his face, and then, just as his victim's head turns to the left, smacks him silly with a right hook to the jaw. The slow motion in which the assault is filmed allows you not only to see the shock of the blow as it ripples through their fleshy cheeks, but to savor the successive waves of surprise washing over their faces.

Jackass has its roots in the skateboarding wipe-out videos directed by executive producer Spike Jonze, which feature intrepid (or simply foolhardy) skaters attempting all manner of ill-advised tricks and failing in spectacularly painful fashion. But there's a difference. In "Jackass," the wipe-out is the trick. The jackasses, an expansive posse headed by Jackass-in-Chief Johnny Knoxville, aren't trying to do anything more complicated than hurt themselves. "Tee Ball," from the new movie, is "Jackass" in its purest form. Two men, one clad only in his briefs, flank a waist-height pole, a swiveling arm with a baseball at one end attached to its top. One brandishes a bat, takes a swing and connects; the other gets hit in the balls. End scene.

The unalloyed idiocy of "Tee Ball" is part of its appeal (that is, if you find it appealing at all). The movie features far more elaborate stunts, like "Duck Hunting," in which two jackasses jump from a crane, land on one end of a giant air mattress and propel a third, waiting at the other end in his underpants and a duck hat, heavenward, whereupon he is peppered with fire from a battery of "hunters" with paintball guns. But for the most part, the dumber the stunt, the funnier it is.

As critic Dennis Lim pointed out in an astute Times piece earlier this week, the "Jackass" films hearken back to the earliest, most protean movies, what film scholar Tom Gunning dubbed "the cinema of attractions." The earliest films were straightforward documents, unmediated recordings like Auguste and Louis Lumière's "Workers Leaving the Factory" or "Arrival of a Train at La Ciotat," both filmed in 1895. But where the Lumières took their cameras out into the world and offered audiences a chance to see themselves and people like them in living motion, Thomas Edison focused on the extreme, the exotic and sensational. Instead of documenting the world, Edison created his own, bringing subjects to his Black Maria studio in northern New Jersey. There, he captured subjects like Eugene Sandow, circus strongman and exotic serpentine dancers. In essence, the brief clips, viewed in kinetoscope parlors for a quarter or two, served as virtual sideshows, miniature midways that could be visited and revisited at will. Not everyone could afford a ticket to "The Widow Jones," a popular stage musical that became notorious for a passionate first-act kiss between stars May Irwin and John Rice, but Edison's "The Kiss" allowed them to ogle the lip-lock up close, without needing to wade through an entire play to do so.

The cinema of attractions' most obvious modern descendant is YouTube, where all manner of human extremity is only a search box away. But the movie industry has never forgotten the appeal of pure spectacle, although it's harder now to charge for only a few seconds of it. The resurgent hype over 3D exhibition is only the latest example. The average action movie isn't sold — or, I'd argue, even experienced — as an engrossing story but as a receptacle for a series of blowout sequences or single shots. Before "Inception" was the year's breakout head-scratcher, it was the movie with that shot of skyscrapers crumbling into the sea, or the one with two nattily dressed men fighting in zero gravity. The train-wreck fascination of reality TV has roots in what Jon Stewart, when interviewing Knoxville earlier this week, called "masochistic vaudeville," as do faux documentaries both telegraphed ("Paranormal Activity") and otherwise ("I'm Still Here").

Some of the more elaborate "Jackass" gags, particularly those involved in playing tricks on unsuspecting civilians, draw on the structures of classic silent comedy, like one in which a massively obese man asks a man to watch his dog while he pops into a store, and the dog is then retrieved by an identically dressed man one third his height. In the early days, it was taken for granted that performers like Buster Keaton and Charlie Chaplin did their own stunts; Harold Llloyd, who famously dangled from a clock tower in "Safety Last!," wore a prosthetic glove to disguise the fact that he'd lost two fingers to a prop bomb. Next to that, the fact that Knoxville had one of his molars knocked out by an airborne dildo seems positively pedestrian.

What's striking about the "Jackass" movies is how little they bother to disguise their origins. There's no overarching story, nor any attempt to provide one. Knoxville and his cohorts still open their bits by introducing themselves, as if they're playing to an audience who might have walked into the film midway through. There's an odd kind of conceptual rigor to their refusal to deviate from formula. Although "Jackass 3D" was not screened in advance for critics, it was shown to an audience at New York's Museum of Modern Art earlier this week, which in all likelihood marks the first time one of MOMA's post-screening discussions has been interrupted by participants attempting to punch each other in the crotch.

You could say that movies have come full circle, or that they've never strayed too far from their beginnings. In either case, the "Jackass" movies are only the most focused, least adulterated manifestations of the the cultural drive towards airing physical and emotional injuries in public, with the added bonus that its participants are most assuredly in on the joke.