The magic pill that turns sour into sweet

Miracle Fruit is a culinary novelty, a trick on the tongue, but it's really a fascinating lesson on how we taste 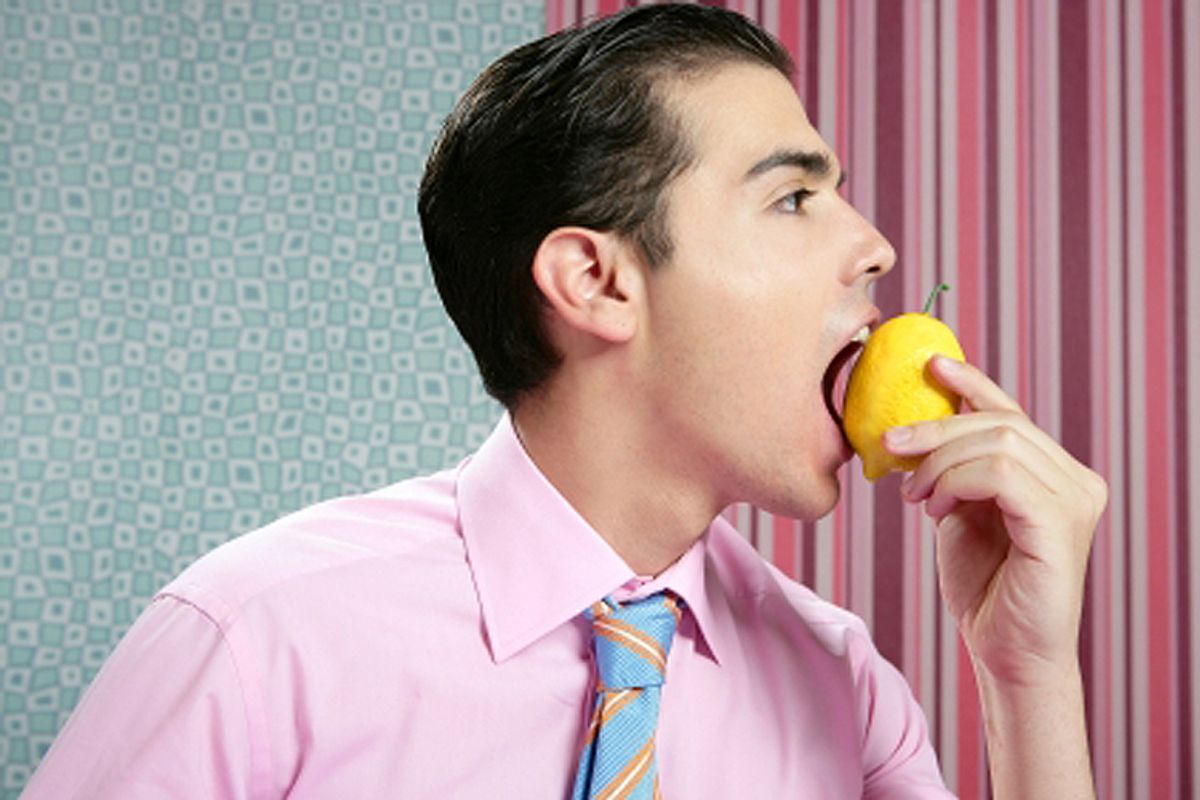 When's the last time you learned valuable lessons from a party trick? Sorry, I don't mean to unleash memories of old college mishaps -- I'm talking about Miracle Fruit, little berries that magically fool your taste buds into thinking that sour things taste sweet. When I first heard about them a few years ago, they were all the rage at parties in expensive lofts -- partygoers would eat them in concentrated pill form, then eat lemons or whatever to ecstatic effect. But the people at these parties didn’t look like they eat much food to begin with, so I paid the pills little mind.

But recently, I've been thinking a lot about how we taste food, what combinations are pleasing and why. There is a chefly orthodoxy that insists on tastes and flavors being in balance. But that sense of balance can shift. We can see that in America's ever-sweetening sweet tooth, as even our savory food is getting more addled with sugar. So with that in mind, experimenting with Miracle Fruit becomes a lot more interesting – will making sour-tinged foods taste sweet make them more appealing?

The idea is that the berry contains a protein that temporarily turns the sweetness receptors in your tongue on to react to acid, which normally makes things taste sour. So the more sour something is, the sweeter it seems, and the natural tartness in the food seems to diminish. Fascinating! Plus, I'll admit it: It just sounds like fun to play around with a pill that will turn a lemon wedge into Lemon Drop.

So, glamorous media superstars that we are, Salon had our own little Miracle Fruit party huddled around a gray table in the corner of our New York offices, located in the fashionable prom-dress-and-porno-shop district of Manhattan. There were no DJ's and no social diary photographers, but we do have video of News Editor Steve Kornacki trying to claw his own tongue off at the taste of the Miracle Fruit itself, which the rest of us thought tasted like, well, not much at all. (Native to West Africa, people have eaten the berries straight, before meals, as a sort of "sweetener" for hundreds of years.)

In putting together the "menu," I thought to include items that were obviously sour, but also ones where the role of acid in the flavor balance is important but a little less apparent. So, on tap:

Lemons; vinegar; coffee; apples; tomatoes; Coca Cola; ketchup; mayonnaise; and, because it was a nice way to kick off our afternoon, a nice big plastic cup of vodka. (The box for the pills I got suggested that the effect works on bitterness as well as sourness. But it lied.)

(If you'd like to do your own Miracle Fruit tasting, I might suggest not reading the tasting notes I have below, so that you can have your own impressions free from any influence.)

Lemons: A huge part of our love of sweetness comes from the fact that it tells our bodies that we're about to get the quick sugar calories we always crave. But is that instinctual response more powerful than our psychological need to know what to expect when we eat? I mean, have you ever reached for the orange juice without looking and taken a sip of milk instead? It's traumatic, and even just writing that sentence made me tense up. So, will sugar-sweet lemons freak us out? No. They are amazing, the platonic ideal of lemon candy. Although some did notice that after that initial, happy surprise, the sweetness tasted a bit strange, almost saccharine-like. I guess there is something about the way real sugar tastes that's different from a generic sense of "sweetness." But fussy palates aside, someone else also said, like a prayer, "I need this. I need this to live now."

Vinegar: Granted, this was cheap vinegar from the deli across the street, so it had undelightful notes of acetone, tin can and plastic bottle, but still, it was kind of fascinatingly tasty. "Like sweet and sour sauce," Life Editor Sarah Hepola said. I mean, the fact that we were able to drink it in full spoonfuls and sips really says something.

Coffee: I am a great lover of coffee, and, ugh, I struggled to not spit out my sip of black gold. God knows coffee is really an acquired taste, and it's one of those things that is so singularly distinctive that it's difficult for people to parse. Everyone knows that bad or burnt coffee is sour and bitter, but even in good coffee, those elements are there, held together in balance by one another, so you don't taste one or the other strongly enough for them to ruin your cup. But with the Miracle Fruit taking the little bit of acidity away from the coffee I found perfectly enjoyable 10 minutes earlier, it now seemed suddenly like the bitterest black sludge. Ugh. But I feel like I really learned something here about how the tastes in coffee work together.

Coca Cola: This was also totally fascinating. Obviously, Coke is very sweet, and yes, there is some acid in there to balance the corn syrup somewhat, but you already know it's tilted heavily towards sugar. But on Miracle Fruit, it wasn't so much that it tasted sweeter or out of balance, but rather, it seemed flat, like it'd been sitting around for a couple of days, and it was unpleasant in the same way that a stale glass of Coke is unpleasant. Thinking on this further, it seems to make sense that the brightening or lightening effect of tartness and of carbonation are somehow similar, and that you need both of them to make something as syrupy as Coke enjoyable.

Tomatoes: These were a prized sacrifice -- the last tomatoes from my girlfriend's parents' garden. This is how much I care about my job, people. But it turns out that they weren't much of a sacrifice at all; they turned incredibly sweet, the kind of sweetness you can only pray to Demeter and Alice Waters for when you buy your fancy heirloom tomatoes. But these were not particularly sour-tasting tomatoes to begin with, so I wonder why the sweetness boost was so powerful. Are tomatoes just a lot more acidic than we realize? Are they internally balanced by sweetness and savoriness?

Ketchup: While the fresh tomatoes were fabulous, ketchup, with its heavy load of added sugar already, got thrown all out of whack and tasted like straight-up syrup. It's kind of incredible to think of how sweet ketchup really is, and how much tartness it needs to pack to make us feel like it's something you want to put on a burger.

Apples: Apples on Miracle Fruit taste great, basically just nicer versions of themselves, but that's what also got me thinking that there was something strange going on with the experiment – an apple also needs its acidity to balance its incredible sugar load. Otherwise, it would just taste cloying, dull and heavy. So why did the apple's nice tartness still shine through? I wonder if Miracle Fruit reacts differently to different types of acid.

Mayonnaise: After it was all over, hours later, I started getting some ill looks. "I think we feel a little sick, Francis," our boss Kerry said. I wondered if it was the fact that we'd been eating lemons and drinking vinegar, and that our stomachs really didn't like all this acid sitting around in there. Or if, perhaps, this strange brew of condiments and beverages and fruits was never meant to be. Or, floundering under withering glares, I started to look around for that vodka (which didn't seem to change at all, by the way), and wondering if people were just blaming my experiment for their own drinky-drinky. But amidst my explanations, Sarah said, "It was the … mayonnaise." She visibly shivered speaking these words. Now, Sarah is a daughter of Texas, where they breed a particular love of mayonnaise, and mayonnaise is actually a sauce built on the balance of lemon or vinegar and oil, but most people (me included) think of it mainly for its richness. But robbed of its balancing tartness, mayonnaise tastes like nothing more than sweetened whipped oil, a thick, heavy mess of godforsaken fatty abandon. (Actually, it tastes kind of like Miracle Whip.) You can see why that might turn someone green, especially someone for whom mayonnaise is usually a source of comfort and understanding.

So, it was an intriguing afternoon, filled with surprised thrills and, well, nauseating bombs. As a cook and an eater, I think I'll still be sorting through my own reactions to these tastes for a while. If you've tried or intend to try a Miracle Fruit experiment of your own (the pills are widely available online), I'd love to hear about notable reactions you had in the comments, or e-mail them to me at food (at) salon (dot) com.