Some call the teen a bad role model over her Revolver cover, and then engage in rather unexemplary victim-blaming 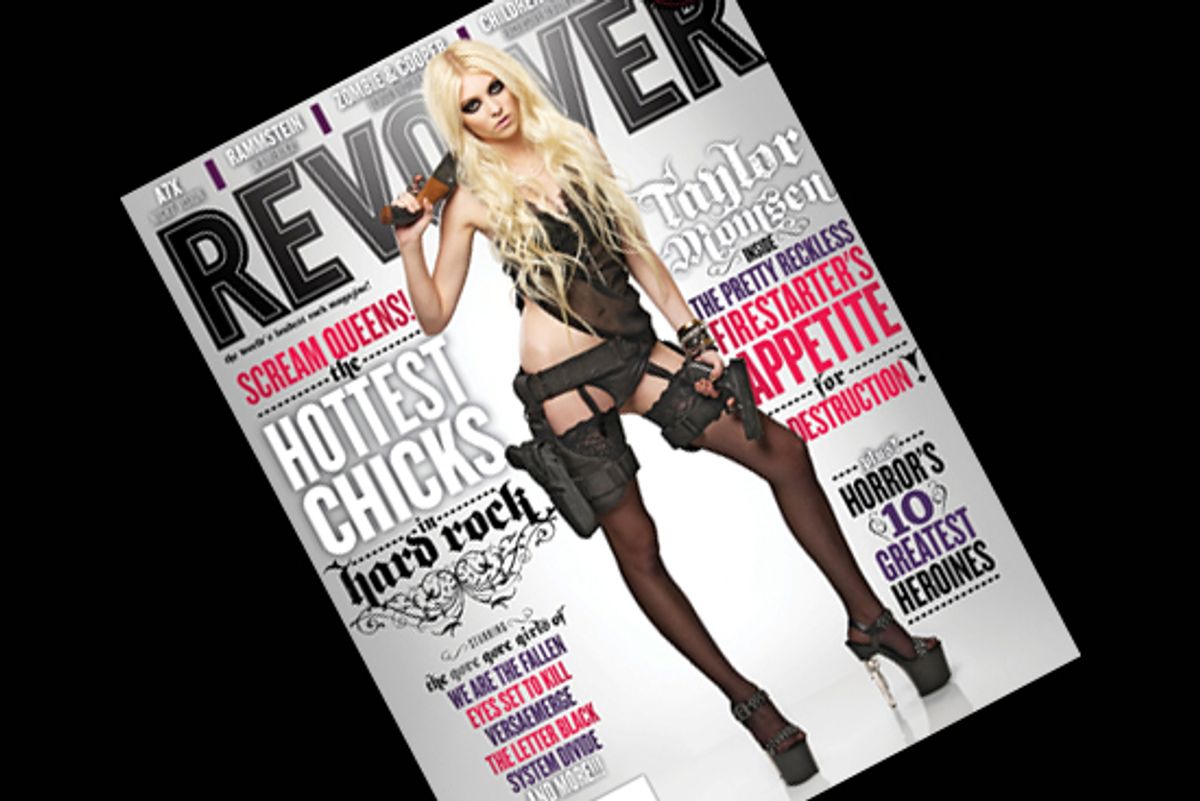 Bonnie Fuller is downright outraged at Taylor Momsen's gun-toting, lingerie-clad appearance on the cover of Revolver magazine. In a blog post, the HollywoodLife.com editor in chief chastises the 17-year-old for not being a perfectly wholesome role model for other teenagers, and I quote: "I think Taylor, who started the rock band Pretty Reckless in 2008, is actually making a pretty reckless statement here." Gosh, do you think she's intentionally trying for that at all -- maybe, possibly? Worse than Fuller's dutiful parental scolding is the classic victim-blaming quote that she includes at the end of her piece:

"She's 17 and dressed as if she's ready for sex and her legs-open stance is sending a loud and clear invitation -- come play with me and my guns," says psychotherapist Dr. Gilda Carle. "What happens when the invitation is no longer a fantasy on the cover of a magazine but when she's alone in a dressing room and some guy comes on to her. How is she going to handle that? Who's going to take advantage of her and will she be able to deal with the consequences?"

It's pretty rich that the very adults who are concerned about Momsen sending a sexualized message to girls are themselves sending an even worse message. They are essentially saying, Don't dare dress sexy or talk about sex unless you're able to "deal with the consequences" (read: fend off aggressive come-ons and avoid being taken "advantage of"). In other words: Girls and women "ask for it" by dressing and behaving a certain way. It's an understandable impulse to want to protect girls from things they aren't ready to handle, but there is no compassion here, no genuine concern for Momsen's personal health or safety. It seems there is only interest in scolding her for having a corrupting influence.

Why not instead criticize Momsen's handlers or the presumed adults behind Revolver for deciding to have the underage pop tart pose in her underwear while packing three guns (not including the two barrels converted into the heels of her stripper shoes). Or, you know, at least make fun of the hardcore rock magazine (said in the voice of the devil while throwing rocker fists) for putting the star of a WB show on its cover.