You call that a fight, Harry?

Apparently, the Senate majority leader thought his debate with Sharron Angle was some kind of untelevised rehearsal 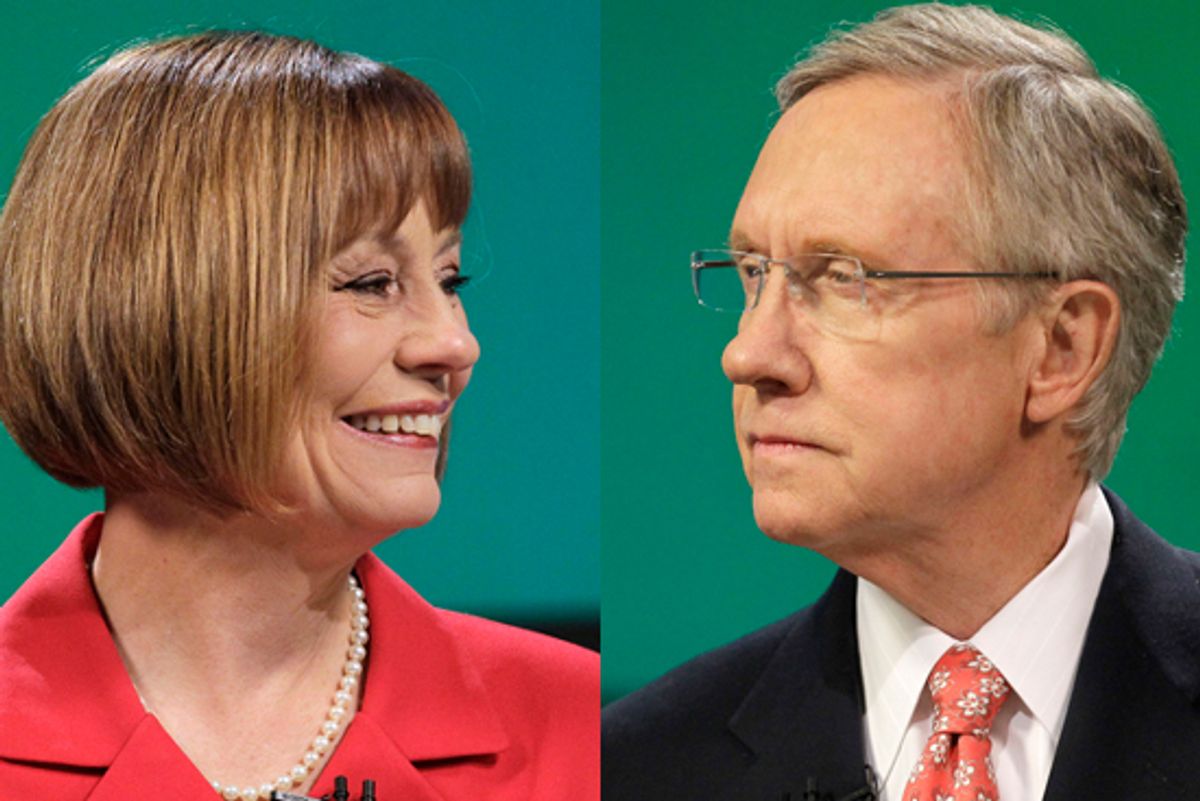 At no point in Thursday night’s Nevada Senate debate -- the sole televised encounter between the two main contenders before Election Day -- did Sharron Angle, the Republican nominee, do any of the following:

* Draw a blank on a gotcha question involving the Supreme Court

* Compare her own religious values to her opponent’s “Marxist” values

* Answer multiple questions from moderators about her past association with witchcraft

Thus, it may well be that Angle succeeded in her debate where her fellow Tea Party candidate, Delaware’s Christine O’Donnell failed the night before.

O’Donnell and Angle, of course, are ideological soulmates; on the issues that voters like to pretend decide races, there is basically zero daylight between them, and you can expect them to vote the exact same way 99 percent of the time (at least) if they were to each join the Senate next year. But it’s not position papers that will decide whether they win in November; it’s whether they can convince voters that they aren’t as flaky as they seem.

O’Donnell, in her debate, faced the stiffer challenge. Her kookiness had already been enough to make her an SNL character, and she showed up at the debate already far behind in the polls. She needed to do far more than simply appear competent to dent the 15-20-point lead that her opponent, Chris Coons, enjoys -- and she failed.

But for Angle, whose perceived extremism and occasional erratic behavior had made swing voters hesitant to support her, “good enough” on Thursday night would probably be enough. She’s been running dead even with Harry Reid for months; it’s clear that Nevadans are itching to throw out the Senate majority leader – they just need reassurance that Angle is competent enough to serve. And in her showdown with Reid, she seemed to meet that challenge.

Her speaking style was somewhat awkward (as was Reid’s) but her performance was devoid of the glaring lapses that dogged O’Donnell on Wednesday. When she was presented with gotcha questions, she was ready with superficially satisfactory responses, and when she was pressed on her more extreme views, she ably reframed the subject in a way that made her stands sound reasonable.

When, for instance, the moderator read off a list of popular-sounding programs that the Department of Education, which Angle wants to eliminate, administers, Angle replied that she wasn’t for getting rid of those programs at all -- just the madness of having Nevadans tax dollars sent to D.C. so that bureaucrats at the Education department could take a share and then send the scraps back in the form of underfunded and unfunded mandates. This is, of course, a misleading oversimplification of what the Department of Education does. But she sold it well; you could imagine swing voters nodding their heads and starting to decide that Angle is not as crazy as they’ve heard.

Angle is hardly an all-star debater, but her performance was serviceable – and it was made much better by the utterly listless and tone deaf show that Reid put on, a presentation that could only be called a success if his goal was to conform to the stereotype of a politician who’s been in Washington too long.

Over and over, Reid lapsed into Capitol Hill-speak, referring to legislation and relying on terminology that few voters have ever heard of. He offered a vigorous defense of the healthcare reform law – by using the word “exchanges” about 16 times. He bragged that he’d empanelled a commission to study the roots of the housing collapse – and noted that the commission included Sen. Byron Dorgan. He talked about reestablishing “paygo” rules and discussed the merits of “wounded warrior legislation.” Asked to give a yes or no answer to the question of whether public funds should be used for abortions, Reid replied, “The law we passed maintained the Hyde Act.”

“That would be a yes or no?” the moderator asked.

“Uh…under the law that we passed, the Hyde Amendment, which has been the law for 30 years, is still there.”

There is a vast disconnect between what goes on in Washington and what voters believe goes on there, and Reid seemed utterly unaware of it.

This is why his boast that he and his fellow Democrats had cut taxes for 95 percent of Americans scored him no points. It may be true, but voters are angry and economically anxious; it doesn’t feel true to them. This may sound ridiculous, but it’s hardly a new phenomenon. In 1994, the Republican Revolution was built on the totally baseless notion that Bill Clinton and congressional Democrats had raised taxes across the board, when they’d only actually raised rates on the very wealthy. Similarly, Reid’s boast of cutting taxes for small businesses eight times did nothing for him, as did his insistence that – thanks to the Wall Street reform bill passed by Congress this year – greedy bankers “will never, ever be able to do to us what they did.”

Reid was trying to sell accomplishments that voters don’t want to hear about. That’s how public opinion works: conclusions are formed, then voters work backward to find rationalizations. They’re angry and uneasy and their instinct is to blame the party that’s running Washington. They will not be won over by hearing Reid calmly explain that the party that runs Washington has actually racked up a solid record these past two years. But they are very receptive to the kind of rhetoric that Angle offered, about Reid voting “over 300 times to raise our taxes,” and Reid voting to give tax breaks and Social Security benefits to illegal immigrants, and Reid somehow getting rich off his job as a senator. All of this meshes perfectly with the anger they are feeling; it doesn’t really matter that her claims can be debunked – they feel true to voters.

At one point, Reid said, “I respectfully suggest to my opponent that she simply doesn’t understand what happened in Washington.” He’s right, of course. But most voters don’t understand it any more than Angle. They aren’t about to be awed by Reid’s superior grasp of legislative process. To them, it just makes Reid sound like exactly what they think he is: an insider who’s stayed around Washington too long.

It’s true that all of this didn’t exactly make for a level playing field for Reid on Thursday. But hey, welcome to 2010. Reid could have helped himself by showing some life and by acknowledging voters' frustrations with Congress and with Washington. Without Angle seriously slipping up, I’m not sure there really was a way for him to win this debate – but it didn’t even seem like he was trying.