Jonathan Schell on the nuclear paradox

"I don't think that we have succeeded yet, collectively, to apprehend what is at stake here" 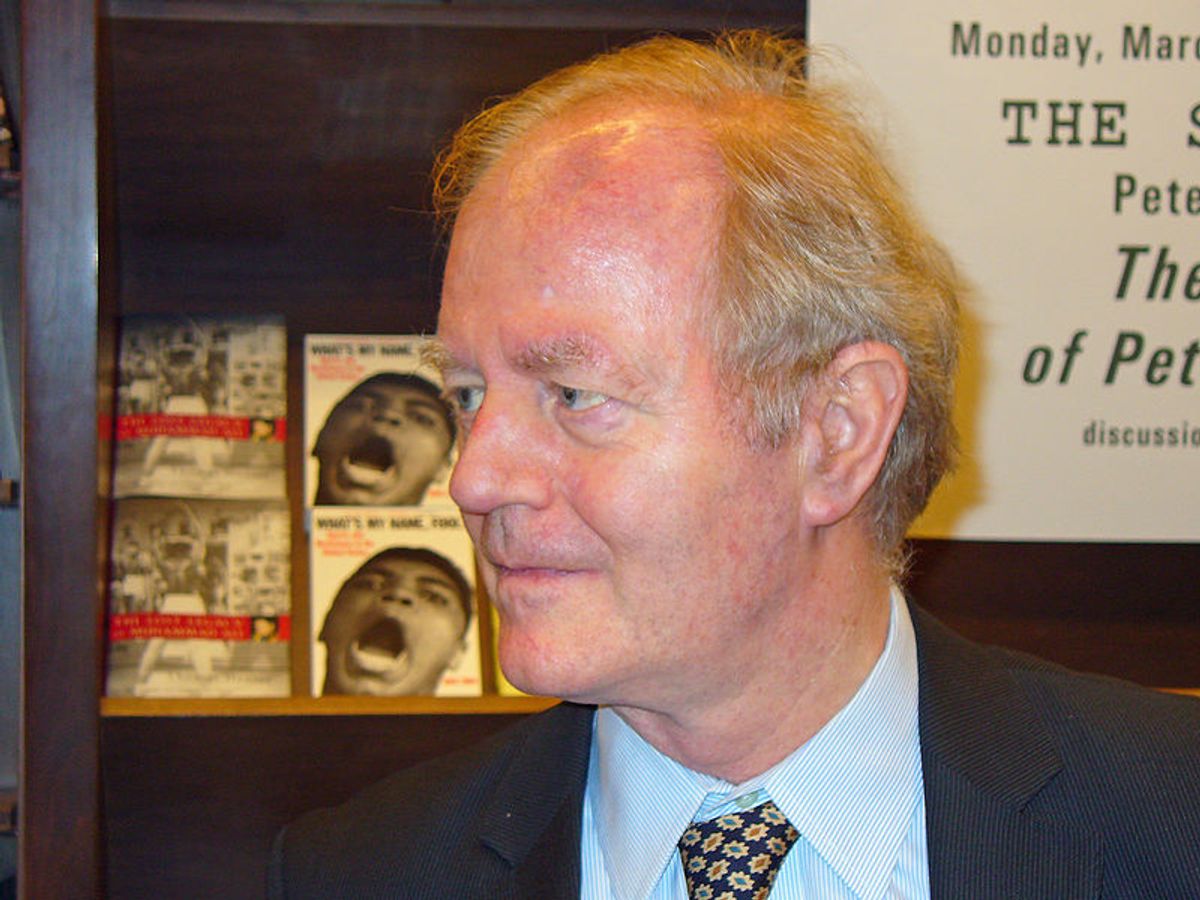 This is the fifth installment of The Influencers, a six-part interview series that Lynn Parramore, the editor of New Deal 2.0 and a media fellow at the Roosevelt Institute, is conducting for Salon. She recently sat down for a conversation with nuclear disarmament advocate Jonathan Schell, author of  "The Fate of the Earth," Fellow at the Nation Institute and Distinguished Fellow at the Yale Center for the Study of Globalization. They talked about America’s conflicted nuclear stance, the obstacles to nonproliferation and the connection between global warming and the nuclear dilemma.

Where are we today in terms of nuclear nonproliferation?

I think you have two contending waves. On the one side you have President Obama’s new commitment to the abolition of nuclear weapons, although he says that’s not going to happen in his lifetime. He’s framed that very much as a kind of weapon to use against proliferation -- most specifically against proliferation by Iran and North Korea. But on the other side you have a kind of counter-movement against that commitment within the U.S. government. And there are people in the woodwork of the bureaucracies who have struck back. The vehicle for doing that was the Nuclear Posture Review (a process that determines U.S. nuclear weapons strategy), and, to a certain extent, the new agreement with Russia.

Each has good things in it. I’m glad the numbers are coming down. I’m glad they’ve promised not to make any new nuclear weapons or have any new nuclear missions. But on the other hand, there are some things which are very disappointing and which do not really reflect at all Obama’s commitment. In the Nuclear Posture Review there was a refusal to have a thorough-going renunciation of what’s called "first use" -- in other words, refusing to have a no-first-use policy. What that means is that the United States still reserves the right in certain circumstances to use nuclear weapons -- even when nuclear weapons are not used or threatened against it.

If this country, with all its conventional superiority and so on, thinks that it can’t be safe in the world without a threat to use nuclear weapons -- even against conventionally armed countries -- then what country in the world could say to itself, by that standard, "well, we’re safe without nuclear weapons?" And most particularly, if you’re a North Korean, or if you’re an Iranian, and you’re facing a very hostile and angry United States, you might well decide, "we need these things, too." So there’s a kind of contradiction that’s built in there. On the one hand, the United States is saying: "we’re ready to do without nuclear weapons over some long term." But on the other hand, "we need them now, and we even need them against countries that don’t have nuclear weapons." So in the contention between those two points of view, some direction will eventually emerge. But in my opinion, it hasn’t really emerged yet.

Of course, I should have said, there are really three waves, because you also have proliferation itself. You have countries who are looking a little bit more interested in nuclear weapons. It takes the form of an interest in nuclear power. There are almost a dozen countries in the Middle East who are suddenly saying, "we’re really interested in nuclear power." That’s a way of keeping your options open for nuclear weapons. And so whether Obama’s commitment to disarmament is going to be enough to bring to the table with the countries that are potential proliferators is very much open to doubt at this point.

What is your earliest recollection of nuclear danger?

I began my life as a writer as a reporter in the Vietnam War. That was way back in 1966. And the experience of being in Vietnam certainly set me on the path that eventually led me to thinking about nuclear weapons. When I arrived in Vietnam I really didn’t know anything about the war. I didn’t know the history and so on. But just from what I saw with my own two eyes it became apparent in the first day that this was a massive governmental enterprise that was absolutely making no sense of its own terms. It was radically and 100% mistaken. Shockingly so. It was self-defeat, which you could see every day, every hour of that war.

So it was the fallibility of government that struck you?

Precisely. It opened my mind to the idea that there could be vast governmental enterprises that most people were saying were sensible but were actually chaotic and made no sense whatever. I still believe that about the presence of nuclear weapons in our world. That was one way that I arrived at it. The other way was that when you looked into the reasons that the United States had got into the war in Vietnam, and, more particularly, the reasons why it couldn’t get out -- the whole arena of nuclear strategy began to loom large. The way that worked, to say it very quickly, is that Vietnam was conceived as a so-called limited war. There was actually a "Bureau of Limited War" in the Kennedy White House before there was ever any major intervention in Vietnam. Well, what was limited war? What was the opposite of limited war? General war? That was nuclear war. So in a certain way, the fighting in Vietnam was an escape from the paralysis of the unfightability of the general war, which meant a nuclear war. Now these two things were joined at the hip in a paradoxical way, so it led me to think about it. That was a pathway into thinking about it.

How does attitude towards nuclear weapons reflect our evolution as human beings?

I now think that the nuclear dilemma is the first in an array of dilemmas that have arisen in which we discover the self-destructive potential of human life is unlimited. We’ve seen that most notably through global warming, but also through a whole other array of ecological threats including the incredible acceleration in the extinction of species in the rain forest and elsewhere around the world, and in the depletion of fish stocks and the whole multi-dimensional ecological crisis. So what we are finding is -- and again it goes back to my experience in Vietnam -- that many of the activities that seem to be our salvation or that seem to be positive turn out to have an unlimited dark side to them. They have their positive side, too, industrialization being an example, or the use of fossil fuels. It’s great: We can sit here and have this conversation because we have a tape recorder that’s fueled by fossil fuels, and so on -- your computer and all the rest. But to state what’s now becoming clearer in an array of fields -- these sources of hope and betterment have turned out to have a dark side that really is without limit.

A nuclear holocaust is often described as "unthinkable." How do the limits of our imagination impact our ability to prevent such a catastrophe?

Well, it’s a problem with many levels. I don’t think that we have succeeded yet, collectively, to apprehend what is at stake here. After all, in some ultimate sense, it is the survival of the species that is at stake. That was put on the table in 1945; it became very acute during the Cold War. Now it’s receded quite a bit, although the technical means are still in place. One problem -- and the whole arena is full of paradoxes -- is that with nuclear weapons present, you can’t really fight a major power war. Well, that’s a great thing -- not to fight a great power war. But one result of it is that you have no experience of nuclear destruction since Nagasaki. And so thought is given little to chew on. We’re left with a lot of theory, and all nuclear strategizing is pure theory. Military strategizing used to be based on actual experience -- millennia of experience of war. But nuclear strategy is quite otherwise because there’s never been a nuclear war. The Japanese didn’t have nuclear weapons, so that wasn’t a nuclear war.

So nuclear holocausts are relegated to science fiction movies?

Well, that’s right. And now, we don’t even have the Cold War. And yet the dilemma is there. These things are deeply embedded in our world. And we can see from the resistance that Obama gets -- or anyone gets -- who actually talks about eliminating nuclear weapons. They’ve become part of the furniture of the world. They’ve become domesticated and deeply lodged in our institutions and our thinking, and so on. And yet, they rarely are brought into consciousness.

On the flip side of that domestication is the romance of the idea of this world-destroying weapon. Do you think that’s part of our attachment?

When the H-bomb was invented, they called it "The Super," and I think it was this use of "super" that put the word "super" in "superpower." So, the weapon is associated very deeply and primally with holding immense power. And that’s of course a legacy of war itself traditionally throughout the millennia. The countries that had the best weapons and the best militaries and so forth were the most powerful. They could fight these wars and win them. It’s no longer true with nuclear weapons. They turn out in actual practice to be rather a paralyzing influence than an enabling one. But I think that that deep association that’s left over inappropriately from the whole tradition of warfare. Psychologically, it means that people still hold tight to these instruments of seeming supreme power even though they are nothing of the kind in reality or in experience.

What is the most dangerous illusion that we cling to with regard to nuclear weapons?

The idea that we can hold onto nuclear weapons while at the same time stopping their proliferation to other countries. That is an absolutely unworkable proposition. It just cannot happen in the real world. And that’s why I think that Obama’s pledge, or his commitment, that the United States is ready to surrender its nuclear weapons has to become something that’s active and real in our world now. It’s the only way we’re going to be able to stop proliferation, including proliferation conceivably to a terrorist group.

Can human beings create policies big enough to deal with a threat as huge as nuclear weapons?

I think that in a whole array of areas, there really are new stakes on the table in politics. And the essence of it is the threat to the natural world. Only a part of it is the threat of the extinction or mutilation of our own species. So, really there’s a new framework in which you have to consider political actions and political thinking -- and the nuclear weapon really was the first expression of that, the first manifestation of this new crisis, which is a crisis of the natural order, as I say. But now others have appeared. And so I don’t know whether we’ll find out whether we’re able to act on that scale -- whether we’re able to step up to the level of danger that we now live with.

Eli Pariser on the future of the Internet (Oct. 8)