King of the makeout

When kids in my seventh-grade class started kissing, I was horrified. But eventually I decided to give it a try 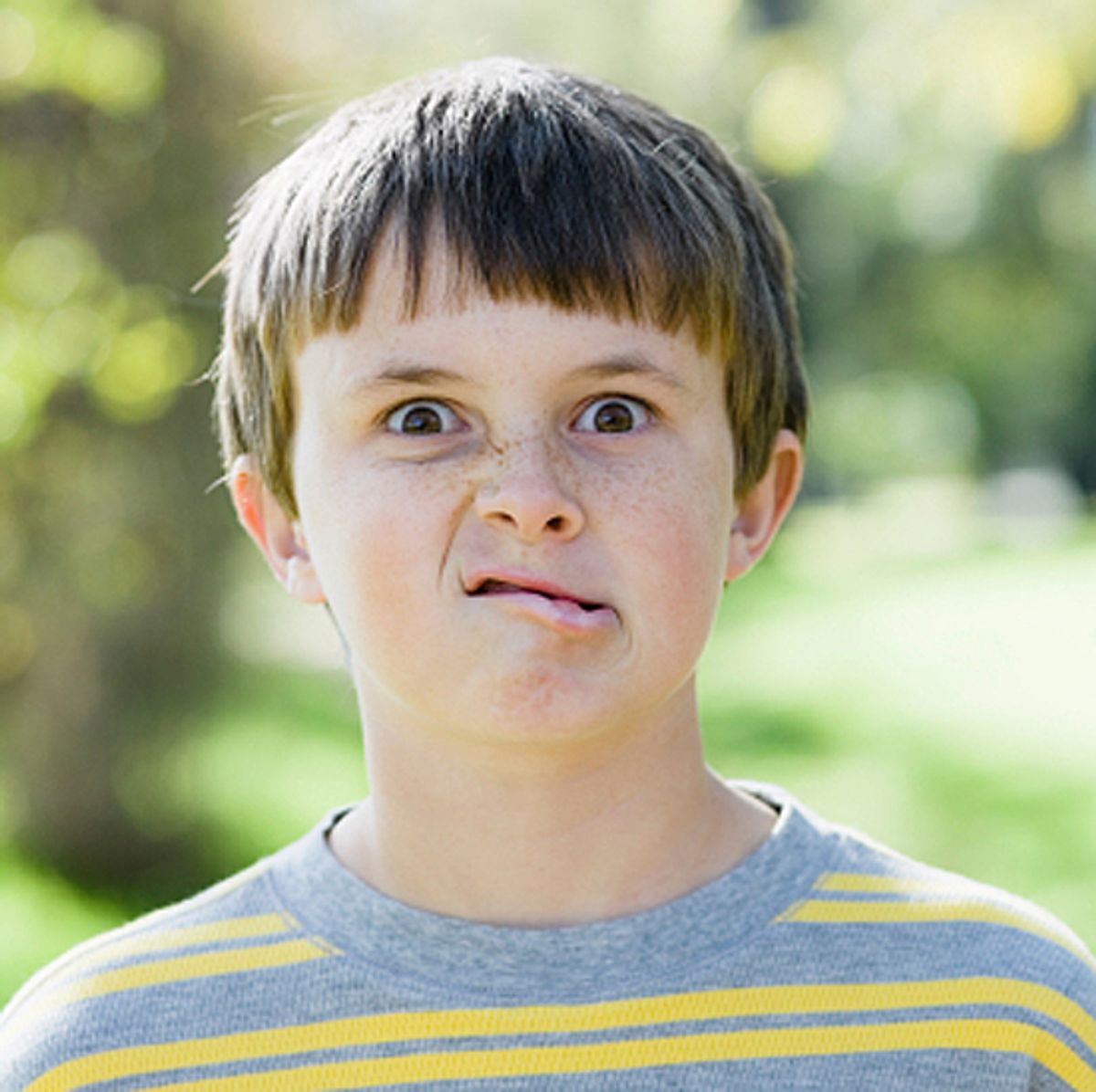 Portrait of a Cute Boy Making a Silly Face
--

My sex education to that point had been minimal. I had certainly always been interested in girls, but I wasn’t so sure they were as interested in me.

Leslie Saliba lived across the street from our house when I was 4. Two years older than me, smart and pretty, Leslie was "the girl next door" both in the way she’d be characterized in Hollywood and in her location. She was the first of a string of women in my life who have viewed me as a very good friend.

When Leslie and I played, usually we’d walk in the woods and Leslie would invent fantasy scenarios. Queen/servant. Princess/ogre. We played almost every day for the better part of seven years, after which Leslie went to middle school. I’ll always remember the day she came home and said to me, "I met a boy."

And I thought, I’m a boy. But I said, "Cool." I knew I didn’t stand a chance with those middle-school kids.

Around the corner from us lived Jesse Nolan, who was responsible for my sex education from ages 9 through 13. Jesse was also two years older than me and very wise in the ways of women. At least that’s what he told me. He’d say, "I don’t know what it is, girls just like something about me. I can’t put my finger on it." And I couldn’t put my finger on it either. Jesse was this hyperactive, eye-shifting, husky guy who used to trade baseball cards with me in a way that left me with fewer and less valuable baseball cards after every session.

So in the seventh grade when people started making out, this came as a complete shock. It just seemed so intangible — like this alien ritual, where these two aliens just attached orifices all of a sudden. I was like, "I am not doing that!" And collectively all the girls in my class were like, "That is fine. You are not on the list. You’re not exactly a first-round draft pick for this new activity." Making out always seemed kind of gross to me. It still does. I’ve always heard this homophobic argument, "I don’t like it when I see two dudes makin’ out in the street!" I feel that way about anyone. Making out is sloppy. It’s like a dog eating spaghetti.

The only prerequisite for a makeout party was a furnished basement, a two-liter bottle of Fanta, and a Debbie Gibson CD. I remember kids I had known my whole life suddenly started making out with each other. It was as though this had been their plan all along. Like there was this secret conspiracy. "Once we’re 12 years old, we’re going to just start making out with each other. But don’t tell Mike Birbiglia. He might try to get involved." Everyone I knew was losing their mouth virginity.

These makeout parties took place about once a month, and one by one I lost my closest friends to the makeout club. For a while, my closest ally was Matthew Sullivan. We would regularly write off the members of the makeout club: "Making out is stupid." "Frenching is for losers." (Since when do kids know anything about French culture?) I felt like one of those kids who proudly wear a chastity ring but secretly hope that someone will just start having sex with them. So Matthew was in the non-makeout club with me. Informal, of course. There were no meetings of the non-makeout club. Those would be sad meetings. "I call this non-makeout meeting to order. First order of business: Nintendo. Second order of business: Why doesn’t anyone like us?"

But the non-makeout club was lonely. I started thinking, I want to be part of the makeout club.

In the eighth grade, I was enrolled at the all-boys school, and every year they’d have what people called "a cattle call dance." It basically means the school would invite girls from all over the state. It seems like an offensive way to describe something, to imply that women are cattle. So the cattle’s showing up at 8, and then we make out with the cattle, and then the cattle leave at 10. Then we’ll go get burgers — but that’s not part of the cattle analogy.

So the dances were held in this gymnasium charged up with hormones and Binaca and Drakkar Noir. All crammed into a room with strobe lights and Bel Biv DeVoe and sweat. The strobe light is helpful because people can see you only every five frames or so. Strobe lights are really good for hiding acne, braces, leg braces, sweater vests, sweaty armpits, over-the-pants hand jobs.

There was no alcohol, so there wasn’t any kind of social lubricant. Just warm Sprite and Dixie cups of pretzels.

I went with my friend Sam Ricciardi. He was a makeout ninja. Every week he’d tell me about all the girls he had made out with over the weekend. Usually those makeouts took place at the mall — which seemed perfect to me. I imagined this strange food-court orgy. And I’d be like, "Sam, how did that even happen?" and he never really told me. He’d be like, "It’s the mall, dude. It’s crazy." I was like, I gotta go to the mall. The mall sounded like a perfect place because I hadn’t had my first kiss, but at an all-boys school you could never admit that you hadn’t had your first kiss. So when people asked if I had had my first kiss, I’d be like, "Me? Yeah! Totally." So I was living this lie, terrified that one of these days someone was going to call me out. They’d be like, "Well, what’s it like?" And I’d be like, "It’s like eating an ice cream cone?" and they’d be like, "No it’s not. It’s like licking a rocket pop." Oh man. Wrong frozen-dessert analogy.

So I’m at the dance with Sam, and there were two girls our friend Tom had introduced us to. And it was one of those situations where guys (and girls) say uncomfortable phrases like, "You get that one." That follows us all the way from childhood into adulthood. "That one’s yours, and that one’s mine." Like we’re cars. And I don’t feel like I’ve ever been one of the good cars. No one’s ever seen me and said, "I get that one!" They’re more like, "I get that one? Um, OK." Or even, "I get that one? You owe me." It’s so sad to think that people are incurring debt based on my appearance. I’d hate to hurt someone’s credit score.

So I’m dancing with this girl Sondra and we haven’t really spoken, but I think we both have a sense that making out is about to take place. Maybe it was that magical moment she noticed me staring at her mouth, trying to figure out how I could land my mouth on hers in a smooth, non-teeth-bumping way. And we’re fast-dancing, which is really hurting my case. I can tell that she’s thinking, If he’s this bad at dancing ... So her interest is waning, but I’m saved by a slow song. "Stairway to Heaven." I knew I had approximately eight minutes to climb those stairs.

And slow dancing isn’t all that challenging. It’s just like hugging someone in slow motion. And all I’m trying to do is just not fidget, because then it might seem like I’m trying to start the making out before the making out starts. Because all it takes is the slightest tilt of the head. Just the subtlest tweak of the neck, and it is on. I think that’s one of the things that scared me so much about the making-out concept. I had kissed relatives on the mouth but never with tongue or the tilt.

And the combination of the tilt and the space in between the two mouths is what scared me. No one has video footage of what happens in the middle of those two mouths. It is uncharted territory. It’s the giant squid of making out. There’s no way to learn how to kiss. There’s no kissing camp. There’s just camp.

It was that unknown that terrified me. Literally terrified me. What if there was some secret move that no one was telling me about that happens in there, like you swap tongues for like one second, or your tongue presses a secret button on the other person’s tongue? And then afterward someone is like, "Did you press the button?" And I’m like, "No! There’s a button? I really botched this one. I didn’t press the button."

So I think, I have to do this, so I initiate the tilt and then she comes in strong. It was really like an all-out mouth war. And Sondra had artillery. She had braces. It was like a dog eating spaghetti and the fork, because of the braces.

And as this oral atrocity is taking place, all I could think was, I’m not alone! I’m not one of those freaks who hasn’t had his first kiss. When I finish up here I can make fun of those losers!

And then afterward, Sam asks me, "How’d it go?" and I say, "It went pretty well, actually." And then as days went on I started thinking it went much better than it had. Like, That was great! I’m great at this! This could work! So I called Sondra.

But we had nothing to talk about because we didn’t know each other, like "Remember when we made out? That was cool, right? Hey — is there a button? Never mind. I love the show ‘Full House.’ You like that show? Yeah. I hate it too." And a few days later she stopped calling me back. And I was like, What is up? First I rock her world and now this? I took her for a ride on the Mike Birbiglia mouth machine and now she’s not calling me?

And he’s like, "Sondra said you’re the worst kisser she’s ever kissed."

And I was crushed. The worst part was that I couldn’t explain that it was my first kiss because I already lied about it not being my first kiss.

So I had to play it off like it was my style. I said, "Yeah, that sounds about right. I’m a terrible kisser."

Fortunately Sam was right there with me. He smiled and nodded, saying, "Me too, dude. Me too."

Mike Birbiglia is an author and comedian. His latest book is "Sleepwalk With Me.”