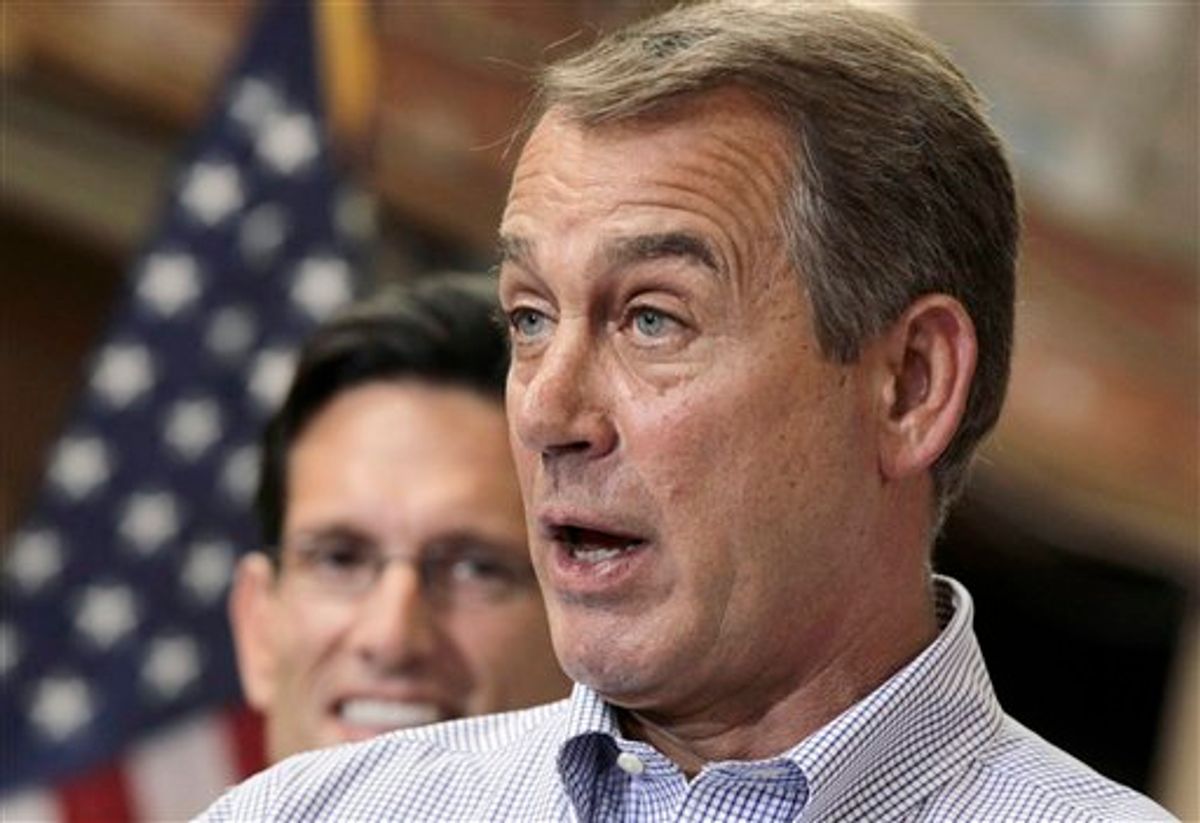 FILE - In this Sept. 23, 2010 file photo, House Minority Leader John Boehner of Ohio, right, accompanied by House Minority Whip Eric Cantor of Va., speaks at a lumber yard in Sterling, Va. If you don't like the economy, blame President Barack Obama and Democrats_ they're making times tougher, Republicans are telling voters entering the four-week home stretch to an election they hope will return them to power in Congress.(AP Photo/J. Scott Applewhite, File) (AP)
--

While Democrats must still expect to lose dozens of House seats and several Senate seats on November 2, the earlier trend toward a massive Republican landslide may have been arrested, according to the latest NPR Battleground Poll released Friday. Conducted jointly by Democratic pollster Greenberg Quinlan Rosner and Republican pollster Public Opinion Strategies, the NPR survey of voters in 96 most hotly contested districts indicates significant narrowing of the Republican lead since the public radio network’s last midterm survey in June.

Still warning of a likely shift in control of the House, the NPR polling team says that while the midterm is still “an ugly election” in the 86 Democratic-controlled districts that they surveyed, this election should no longer be considered a “death march” for Democrats. Their analysis highlights four important new developments:

First, in ten “battleground” House districts currently held by Republicans, the latest numbers suggest that the GOP will “lose a fair number” of those seats bedause their lead has been cut in half since June.

Second, in 58 House districts polled last June and this month, Democrats are gaining ground, with the Republican lead cut by more than half from eight points to three. Those advances are not enough to save the seats for the Democrats but suggest that the trend is now moving in their direction. If it keeps going that way, they may save some of those seats.

Third, independent voters have stopped moving toward the Republicans and reversed direction. Back in June, the Republicans held a 21-point lead among independents, which has shrunk since then to 13 points – still sizeable but not insurmountable if the numbers keep moving.

Finally, the NPR survey shows the Democrats winning the “message debate” in recent weeks, a development that the pollsters call “amazing” – and it is, considering how poorly the Democrats have fashioned their messaging in this election. In the June poll, Democrats “lost every message contest” by 12 points; now, the Democratic message is prevailing. If this is a “wave election” that will produce a Republican tsumami, voters ought to have tuned out the losing party by now.

As Democratic activist and analyst Simon Rosenberg noted today, a Democratic resurgence meme surfaced and then disappeared within a matter of days. But the NPR poll ratifies a growing strain of analysis suggesting that the Republican tide has crested -- and that voter sentiment has begun to reverse direction.