If Sarah Palin falls in a forest?

The GOP star is touring California, but no major Republican candidates are turning out for her 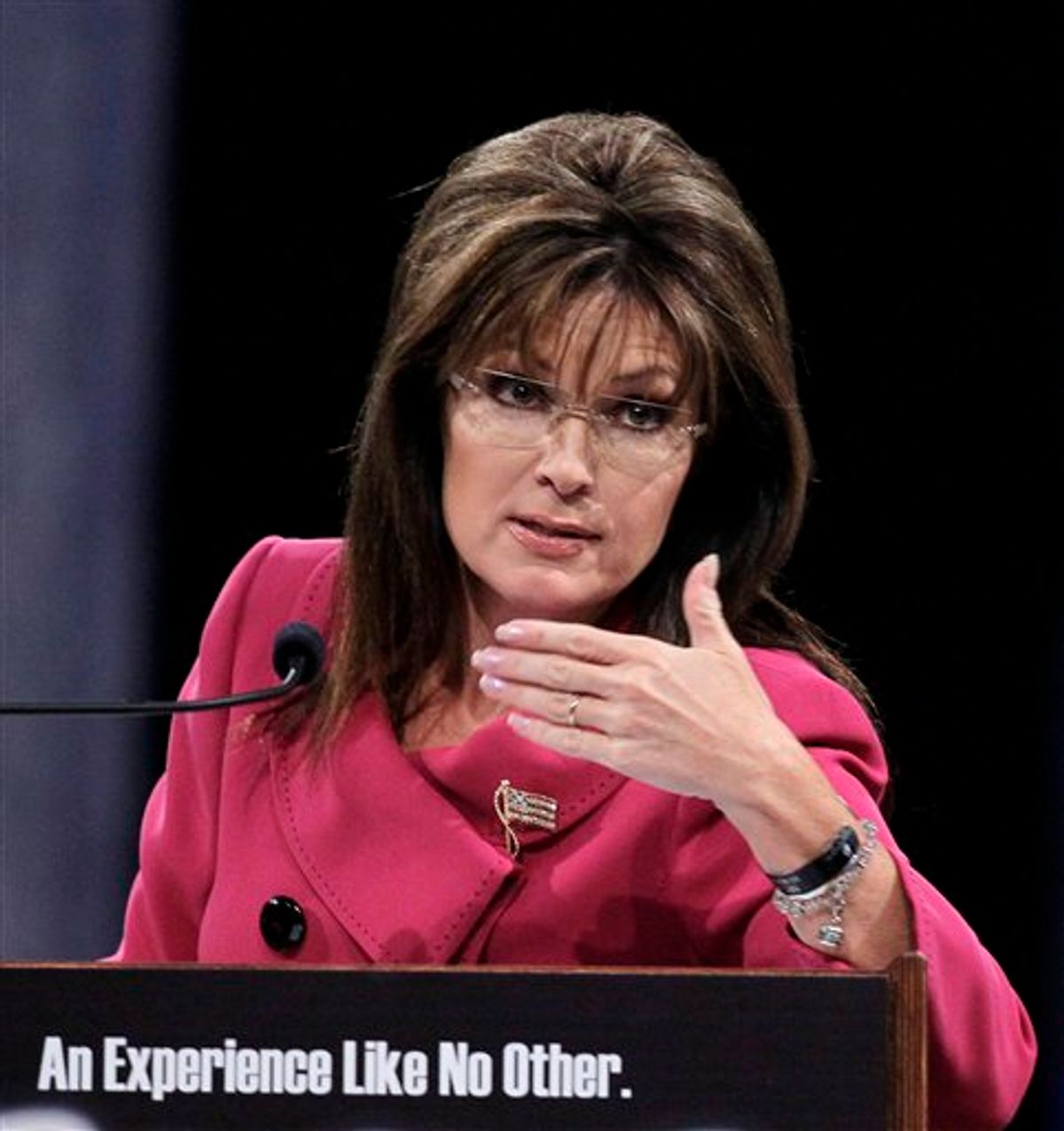 It's strange to be aware that Sarah Palin is in California and no one I know seems to care much about it. Sure, my crowd is mostly Democrats, but I'm also thinking about GOP senate candidate Carly Fiorina and our would-be governor Meg Whitman. Both said they had other engagements this weekend -- they're washing their hair? -- and that's particularly hurtful coming from Fiorina. Palin's May endorsement helped shore up the former HP CEO's standing with party right-wingers, since Fiorina was a McCain surrogate in the state, and a real Tea Party candidate, Chuck DeVore, was in the race.

But Fiorina told reporters she wouldn't be with Palin this weekend: "There are lots of people who've endorsed me that I don't appear with." Wow, that's worse than Alaska GOP Senate candidate Joe Miller's diss of Palin. I think Fiorina should expect some nasty mis-spelled email from Todd Palin, if not a moose-head in her bed.

Palin doesn't seem chastened by the failure of her party's contenders to bask in her political glow. She's having a party, mocking President Obama, Katie Couric, Democrats generally, and most repugnantly, Michelle Obama. At her San Jose event she played off the First Lady's much maligned (and misunderstood) statement, "For the first time in my adult life, I am really proud of my country, because it seems hope is making a comeback." Palin said, with her trademark tortured syntax: "You know when I hear people say or had said during the campaign that they've never been proud of America until that time I think haven't they met anyone in uniform yet?"

Of course that's not what Michelle Obama said, but beyond that typical Palin mangling of the truth, let's examine the utter classlessness of her remarks. She's a leading if undeclared contender for the Republican presidential nomination in 2012; in many ways comparable to Sen. Barack Obama in 2006. Can anyone imagine Obama mocking Laura Bush for something she might have said on the campaign trail two years earlier? Of course not. But there's no bottom when it comes to what Republicans, especially Palin, will say about the Obamas. There are new rules, folks.

But it's clear why Whitman and Fiorina shunned Palin: More than half of California voters in last week's Field Poll -- and two-thirds of independents -- said Palin's endorsing a candidate would make them less inclined to vote for that candidate. A larger proportion of Californians say Palin's not qualified to be president, and yet the state's right-wing faithful could be crucial to a Palin presidential run, with both money and primary votes.

Against this backdrop of Palin's self-interested electioneering, we see a trailer for her new reality show, "Sarah Palin's Alaska." Depicting Palin on a dogsled, a snow-hike and cradling her son Trig, the show purports to prove that Palin doesn't want to be in Golden State, she wants to be in her own state. "I'd rather be doin' this than be in some stuffy political office. I'd rather be out there bein' free." Why doesn't she do us all a favor and just do that? Because she can earn a lot more money in the lower 48. What a hoax she is.