Why do Bravo's trussed-up middle-aged stars have so much in common with "The Walking Dead's" rotting corpses? 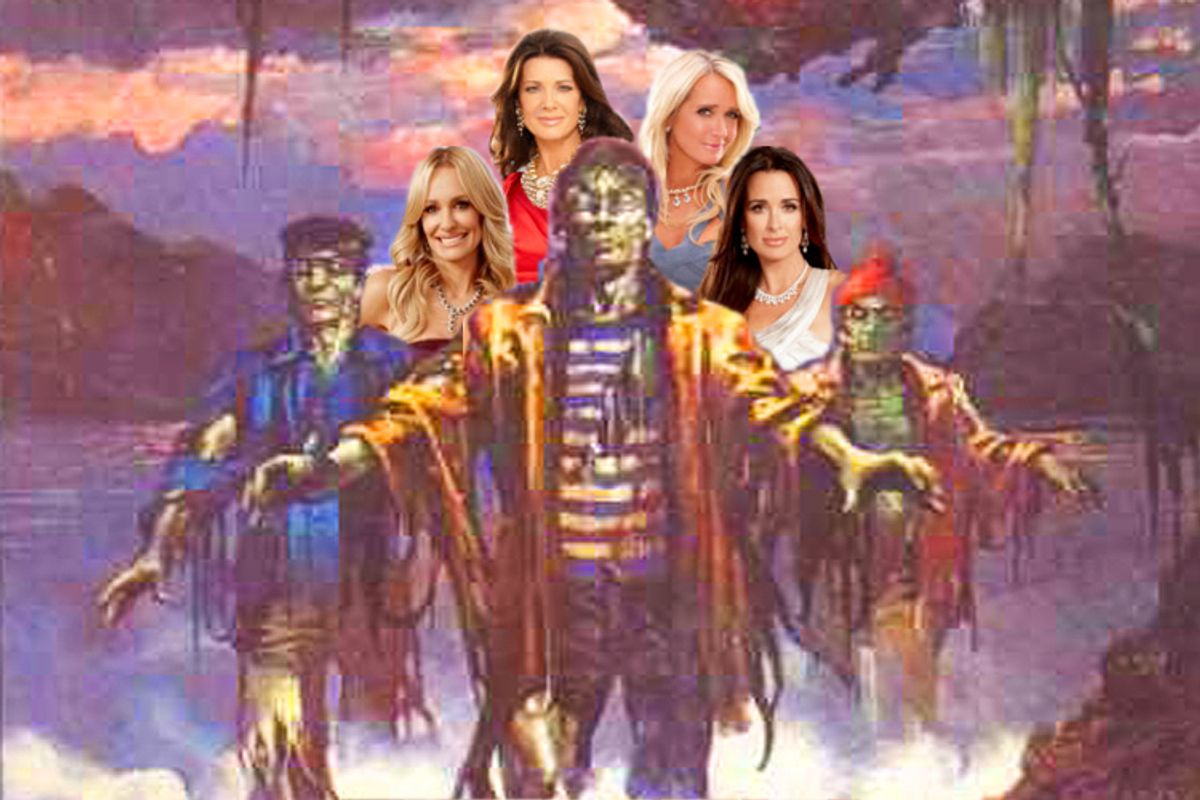 They can barely speak, or formulate a cohesive thought. They can't see clearly. They plod forward at an excruciating pace, stumbling clumsily over each other to get closer to the camera. They are easily distracted by bright lights, and shiny things. But they are so hungry, so ravenous! And that makes them vicious.

Yes, "The Real Housewives of Beverly Hills" (9 p.m. Thursdays on Bravo) are just as terrifying as the others of their kind. In fact, these housewives – soaking in the relentless Southern Californian sun, sucking in the toxic, smoggy air, injecting themselves with the finest biochemical concoctions money can buy, rubbing bony elbows with the rich and famous but never getting close enough to the camera to assuage their oversized egos – may be even more frightening than the rest of their brood. They've come close to the holy grail of fame, but have never sipped from its coveted chalice. And that is what they desire, more than money, more than enormous mansions, more than breasts as buoyant as overinflated water wings. They want to be celebrities, damn it. Sure, they have everything a woman could ever want, but they're still starving for more, more, more!

In fact, switching back and forth between AMC's upcoming zombie apocalypse "The Walking Dead," (premieres 10 p.m. Sunday, Oct. 31) and Bravo's latest installation in the "Real Housewives" franchise, it's tough to say which specter of dystopian despair chills me to the bone more completely. Here we have a zombie, cut off at the torso, dragging itself through the grass like a fish. But over here, we have Camille, Kelsey Grammer's wife, who has four nannies, 17 acres and a private jet, but still needs to "get a little attention" for herself, according to her husband. Here we have a chained door with the words "Dead Inside, Do Not Open" written across it. Over here, though, we find Kim, a worried-looking mom who confesses that she doesn't have a life outside of her children. Here we have a drooling, plodding zombie with dead eyes, throwing itself into the path of danger just for a taste of human flesh. But over here, we encounter Taylor, a leggy blonde who says, "I was almost envious, in some respects, of people who were content in living the middle-class lifestyle that they had. It would've been much easier not to have such enormous aspirations. It's a lot of pressure."

These teetering bubble-boobed zombies are their own worst enemies, you see. They sometimes wish that they were just lumpy and average and sat around in their soft pants eating jalapeno poppers and watching "Oprah" like the rest of the gals they knew back in high school. Life would be so much simpler, if only they had never been afflicted by the Bimbola virus, passed along when you spot a bubble-boobed zombie on the street somewhere, and instead of running for your life (like a normal person might), you think, "I have shiny, long hair, too. Why am I not filthy rich like that starving sea donkey getting into that Aston Martin over there?" "I was a child star, and everyone loved me. Now that I'm older, why don't I get tons of attention from strangers, like Carmen Electra does?" "I have an anxiety disorder, an eating disorder and a compulsive personality. So why can't I afford a pair of $3,000 hooker stilettos?"

Once the virus sets in, all hope is lost. You may not have a hunger for reality TV shows about idle rich people, but if you've watched lots of zombie movies, then you already know a lot about "The Real Housewives of Beverly Hills":

1. They're agonizing to watch. Whether they're dragging their feet across the ground, moaning, their eyes rolling back in their heads, or fidgeting through a dinner with their dismissive, high-roller husbands, Real Housewife zombies are torturous to endure onscreen – and that's the point, really. Just as the appeal of zombies lies in their uncanny knack for creating suspense and dread, for sticking their dead fingers through little cracks in the barely open window or lurking in the pitch-black basement, the appeal of Real Housewife zombies lies in their ability to systematically destroy everything around them, using only their tumultuous emotions, their weak ego boundaries and their misguided attempts at fame-seeking. Like the undead, they won't sleep until the world is in flames and the few remaining surviving non-zombies are crouching in their hidey holes, weeping into their hands, begging for mercy from this plague of terror – or at the very least, watching their show on Bravo.

2. They're not human. Not really. The truly challenging thing about zombies is that you feel like you should have empathy for them, but you just don't. Shooting zombie women and zombie children in the face in zombie movies might bring a tinge of guilt, but it's necessary if you're going to avoid getting eaten alive. In fact, one of the real joys of zombie movies is that they afford a rare opportunity to detest other humanlike nonhumans with impunity. Similarly, the "Real Housewife" franchise presents gaggles of humanlike women who, upon closer inspection, aren't really human at all. Look closely at them. Stare into their eyes. Remember Linda Hamilton in "Terminator" (huge neck, sinewy arms)? Now think of Pamela Anderson (sculpted, Botoxed tigress face, plumped up lips) and Bruce Jenner (plastic, unmoving features that approximate his boyish self the way a figure in a wax museum might). It's hard to empathize with a Madame puppet, isn't it? This unnatural, plastic quality makes the Real Housewife zombies easier to hate – which is, after all, the whole point.

3. They're starving. But do they crave a triple cheeseburger, or a hunk of your flesh? Who can tell? The only thing that's clear is that these Real Housewife zombies are absolutely famished, and it's making them very, very anxious. Why else would Kim, an unmarried mom already struggling to raise four kids, talk wistfully about wanting another baby? "Babies bring so much joy to a home," she says, as if she's talking about a new vase of flowers or an in-ground swimming pool. And how else could Camille Grammer imagine that appearing on a zombie reality show presents "an opportunity for me to show that I'm my own person"? With deranged comments like these floating around, you have to remember: These are women who spend most of their time off-camera running on treadmills or struggling through kickboxing workouts or jogging through their enormous estates with their personal trainers. They're delirious with hunger, and that makes them unpredictable -- just ask the mob of zombies who eat a horse alive in "The Walking Dead." Thankfully, most zombies are very slow-moving (except for NYC Housewife zombie Bethenny Frankel, of course, and that's why she's scarier than those speedy undead bastards from "28 Days Later").

4. They'd eat your face off for a chance at superstardom. Some scientists have theorized that the Bimbola virus actually infects small girls at a young age, via Disney princess movies. Once young ladies are inflicted with this virus, they spend every second imagining themselves the belle of every ball, imagining that their entire success in life hinges on the spotlight hitting their glittery gowns at just the right angle to catch Prince Charming's (or the 18-49 demographic's) fancy. While in the early stages, the virus creates a crippling compulsion to twirl and twirl and twirl in front of the mirror, humming, "So this is love, hmmm, so this is love!", as the virus matures and mutates, it creates other side effects, like an urge to flat-iron your hair or wear leopard prints. Although milder cases resolve by early adulthood, severe sufferers find themselves seeking out the spotlight, no matter what the cost, through their 30s and 40s, whether that means wearing size 2 booty pants to PTA meetings or letting the nanny tuck the kids into bed while they wait in long lines behind velvet ropes to get into nightclubs where other afflicted souls wander, their eyes full of empty longing. The bottom line is that Real Housewife zombies would rip your arm out of its socket and ingest it in a few minutes flat, if that could guarantee them an invite to P. Diddy's mansion or a guest appearance on some terrible talk radio show. (No, the undead don't exactly aim high.)

5. They show no mercy. In a related note, the more driven to become perfect and famous and special the zombie housewives are, the more dangerous they become – even to their friends and family. Just listen to zombie housewife Kyle talking about her sister, Kim. "Kim has really made her kids so much the focus of her life that she doesn't have a lot of great girlfriends. She's very isolated." "Kim has always been a big spender ... She definitely has an issue with spending." "Kim is a very codependent person." At the end of the episode, Kyle confesses that when her mother was on her deathbed, she made Kyle promise that she'd look after poor Kim, but sometimes Kyle thinks she's going to have to break her promise. Could a living, breathing member of the human race say something so condescending about her own sister in front of a national TV audience? Of course not. Zombies are foul, unforgiving creatures that should be avoided at all costs – except when you can observe them from a safe distance (and cringe and giggle and sneer, then toss and turn in bed all night).

6. There are no happy endings here. Things will end badly for zombies and Real Housewife zombies alike, no matter what. And even though you know that these zombies will destroy everything in their paths, self-destruct, decompose slowly, or all of the above, you still can't look away. When Taylor says that there are hot girls everywhere to tempt her venture capitalist husband ("Like, oh lord, he's gonna leave me for a 20-year-old!") and then she lays out her exit strategy ("I don't want to put myself in a position where I don't have the ability to care for myself, in the event that one of these days, you know, the younger better thing comes along. And … you know, things happen!"), it's just like that scene in every zombie movie where the unseeing zombie walks straight into an axe-wielding hero. Taylor's husband is as good as gone. Why bother getting painful filler injections (as Taylor does in the first episode) to look younger, when you're already convinced that random 20-somethings on the street will appeal to your husband more than you do? We know Taylor is going down, and we're going to have to witness every torturous moment of self-doubt and self-annihilation along the way.

Of course, thanks to the tabloids, we know that Camille Grammer is going down, too. But how many other innocent souls will she take down with her? We won't know that until the last terrible screams ring out and the final credits roll. Only one thing is for certain: This show will give you nightmares.