Secrets of the polygamists 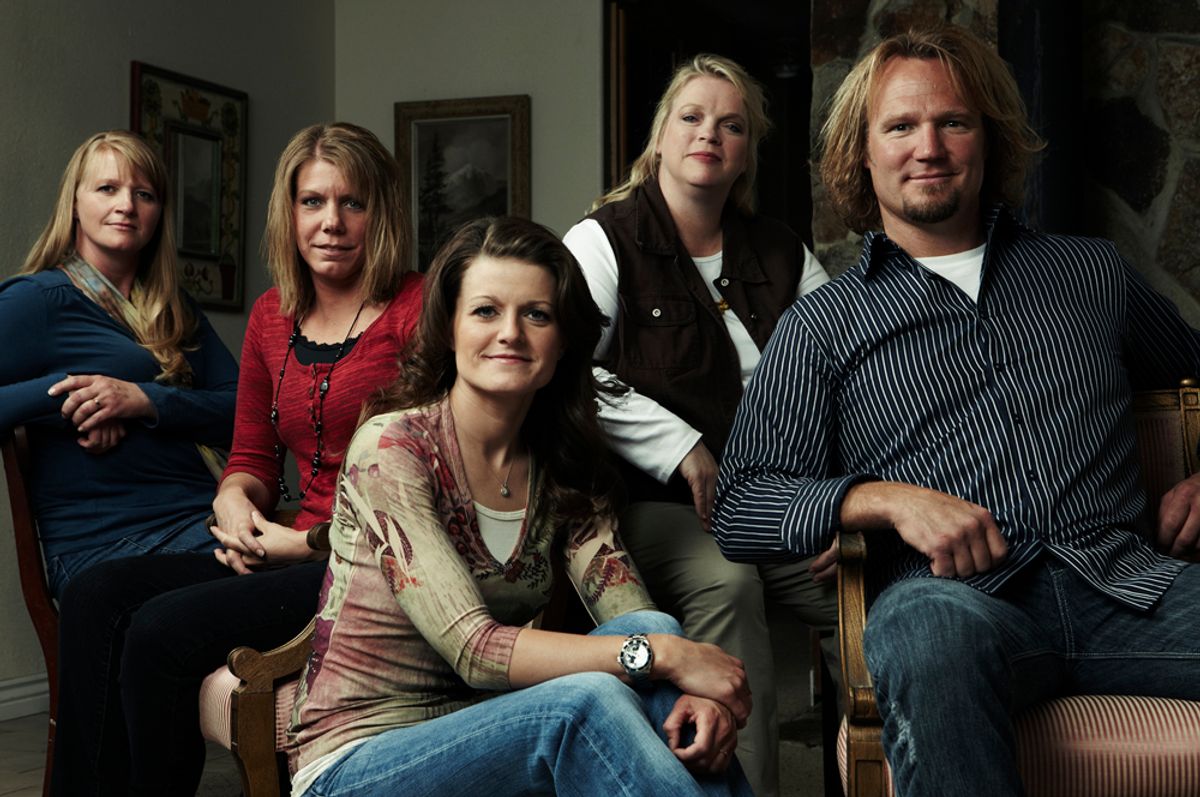 Considering its sensational subject matter, TLC's "Sister Wives" has been refreshingly modest. The stars -- Utah polygamist family Kody Brown, his wives Meri, Janelle, Christine and fiancee Robyn, along with their 16 children -- have a natural, honest presence in a genre fabled for the camera-hogging antics of "Jersey Shore." Rather than merely emphasizing what's different about the Brown family -- most obviously, their "plural marriage" -- "Sister Wives" shows us how normal they seem: loving and good-natured around their children, occasionally prone to envy and feelings of betrayal. Meanwhile, the show offers a peek into an unfamiliar world: The sprawling dormlike home where the whole brood lives in attached houses, the rigorous scheduling of Brown's date nights and sleeping arrangements.

But what's just as notable about "Sister Wives" is what it doesn't show us. TLC scarcely acknowledges the Browns' deeply held fundamentalist Mormonism. (This isn't unusual for TLC, which also makes little mention of the conservative Christianity theology of the Duggars family from "19 Kids & Counting.") Because of the clandestine nature of polygamists, we don't meet other families or see much of the community at large. (There are about 38,000 fundamentalist Mormons in the U.S.) Adding to the intrigue is Kody Brown's recent legal trouble; in the least surprising gotcha in television history, Brown came under investigation by the Lehi, Utah, police for bigamy after the show began airing in September. He faces up to 20 years in prison if convicted. As the show nears its season finale on Sunday, "Sister Wives" has arguably raised more questions than it answered.

To help fill in those gaps, Salon contacted Anne Wilde, co-founder of Principle Voices, an advocacy group for the civil rights of polygamists. A graduate of Brigham Young University, Wilde grew up in the mainstream Mormon church and had a monogamous marriage that ended in divorce. She converted to fundamentalist Mormonism as an adult and was in a polygamous marriage, as her husband's second wife, for 33 years. She is now a widow. We spoke with Wilde from her home near Salt Lake City about the show, why Bill Paxton is kind of a wimp, and the parallels between the polygamous and gay fight for civil rights.

Why do you think the Browns are being prosecuted now? Surely law enforcement was aware of the polygamist community before the show.

The Lehi Police Department said they were going to investigate it. That's as much as we know, and I'm not going to second-guess it. We have an excellent [state] attorney general who said he isn't going to prosecute consenting adults unless there's another crime involved in the family. But the situation with Kody Brown and his family is a local matter.

I know the family well, and there's nothing else they've done wrong. They pay their taxes. They don't abuse their children. They were all married as adults. So it's just the polygamy thing that's bothering [the police].

What do you think of "Sister Wives" so far?

The first episode was outstanding. The second one was a little on the serious side. When you bring in another wife, that is a challenge. When you're showing this in public, you need to establish the fact that this family is happy, they do things together, they're well-adjusted. I would rather have seen something like that in the second episode than bringing in another wife, and all the heartache that is associated with it. There were too many tears.

It definitely undercut the sense of normalcy they had worked to achieve in the first episode.

Absolutely. And that's too bad, because I know the family, and I didn't think the producer would do that. But the family was very, very open with him. I was surprised that they were as open as they were.

You did a New York Times interview in 2006 for the "Big Love" premiere with a few other women within the lifestyle.

Oh, yes! That was embarrassing. Did you ever watch that show?

I've only seen a couple of episodes. Bill Paxton's not my favorite.

He wasn't my favorite in the show either. In fact, we all commented that he was quite a weak patriarch, and he was very amoral besides. That is such a no-no in our community, to court and sleep with a woman before she became his wife.

That was an issue in the second episode of "Sister Wives" even, because Kody kissed Robyn, the fourth-wife-to-be, while they were dating.

Yes, and [third wife] Christine was upset, because in her case, she didn't kiss him until they were married, over the altar.

Is that generally the case?

No, I wouldn't say that was the average. But every group's different. I don't think some encourage anything like courtship until you're married. Some of the other groups and the independents believe in it, no heavy petting or anything like that, but within reason. Just to make sure there's some chemistry there.

During that interview, someone said, "There's not a woman out there who's going to share a man without religion being a factor." Is that true? Because "Sister Wives" doesn't really talk about the religious factor at all, and sort of focuses instead on the practical upsides to living in polygamy.

The Browns are deeply, deeply religious. They would not be in that principle if it weren't for religious reasons. I can't say "no woman" as a blanket statement, because we're only talking about fundamentalist Mormons. We do not live it for any other reasons but religious reasons.

The family makes a point early on in the show, and they make it repeatedly, that each wife has her own separate sexual relationship with Kody.

One of the stereotypes is that it's a big love fest.

Is that a misconception you deal with a lot?

Sometimes, yeah. People also think there's some sort of relationship between the wives, which is absolutely not true. Like I say, we have a very high moral standard and that's not included in it.

What are some other misconceptions that you have to dispel often?

Oh, that we're in poverty, and we have to depend on welfare, and that the women are uneducated, and that we're barefoot and pregnant every year, and we abuse the children. That we all wear prairie dresses.

In the last episode, Robyn, the fourth wife, said: "The lifestyle rubs off all your rough spots and makes you become a better person." What does she mean by that?

Well, you have to get over being selfish. You're sharing somebody that you love very much, and that's difficult for some people. They're living it for religious reasons, but they've still got feelings. And the man has to learn, as time goes on, how to become a better father and a better husband. And a woman has the advantage -- to come into a family after he's been married for a while and been a dad. She can see what kind of a father he is. She gets to benefit from the training and the experience he has gained from being married to one or two other wives.

Kody has been with the three wives for 16 years plus. What is the benefit of bringing a fourth wife in so many years later?

The only reason you do it is because you feel that the Lord wanted you to do that. Here's a single mother that has three kids, who's trying to raise them by herself. That's very difficult, and I was kind of in the same boat. I had three kids as well. I thought it was wonderful when I was able to become the second wife of another man, because my kids then had a dad again. So, they didn't plan this. It's just that if you believe in this principle, you don't put a limit on the number of wives you're going to take.

I thought it was interesting that Meri, the first wife, initiated the courtship between Kody and Robyn.

That happens frequently in our families. It isn't the husband that's out looking for another wife. It's one of the existing wives that frequently makes the suggestion: Why don't we have her over and see how she gets along?

Robyn was divorced before she met the Browns. What is the attitude towards divorce in your community?

In our scriptures it says that as long as that woman takes a step up, like if she's in monogamy and then joins a plural family, then that is correct. But if a woman marries in polygamy, and then leaves the plural family and the lifestyle and marries somebody in monogamy, to us that's not correct procedure. But of course, in the eyes of the world, that's fine. We raise our kids with the free agency that they can choose what kind of marriage they want when they get to be adults. It's not something that's forced on them. I think people feel like we're brainwashing our kids and forcing them all to live plural marriage when they get older. And that's not the case at all. My kids did not choose that, and we still have a good relationship.

One of the wives said it's sometimes easier for them to say that they're sisters. What are some of the coping mechanisms for living within mainstream society, when questions arise?

People handle it different ways. I didn't ever admit publicly that I was a second wife. My own parents didn't know for a while. Because of the LDS church's influence in the state, you don't go around telling your neighbors that you are a plural wife. I never took the name of my second husband. Sometimes people will say my sister, my cousin, my friend, or whatever works best for them.

Are the Browns jeopardizing their public lives by coming out on the show?

No, they've said before they even went on the show that everybody already knew. Their co-workers, the kids' friends, their neighbors. Everybody knew. So did the law enforcement, I'm sure. It's not something that they had been hiding.

How do you respond to feminist criticism to this lifestyle?

I call myself a feminist fundamentalist, because I feel like I have the best of both worlds. When my husband is visiting one of the other wives, I can have time to go out to dinner and a movie with my friends. I can have one-on-one time with my kids, I can have a job, I can go back and get my education and still have kids because there's a sister wife to help take care of them. Feminists think oh, they're subdued. They're controlled by a strong man. My husband and I just got along beautifully, and I had every freedom in the world. Probably more so than most monogamous couples. When he was here, he was my focus, and I loved him dearly. But when he was not here, I had my own life. People don't think you can be independent and be in this lifestyle, and that's absolutely incorrect. It's the independent ones that get along the best.

I'm sure you're aware that some of the vocabulary used advocating polygamy is the same that people use in the fight for gay rights: "coming out of the closet," the "lifestyle," "a viable alternative lifestyle between consenting adults."

We both would like equal civil rights. And from that point on it's pretty much not the same. We go by the biblical law. I have a very close cousin I was raised with who is gay, and we just consider ourselves the black sheep of the extended family. I have a lot of love for the individuals, but I cannot support the lifestyle as one that God would necessarily approve of. But He loves all of us children. There are all different kinds of alternative families, and we feel that we ought to be able to form our own family as well.