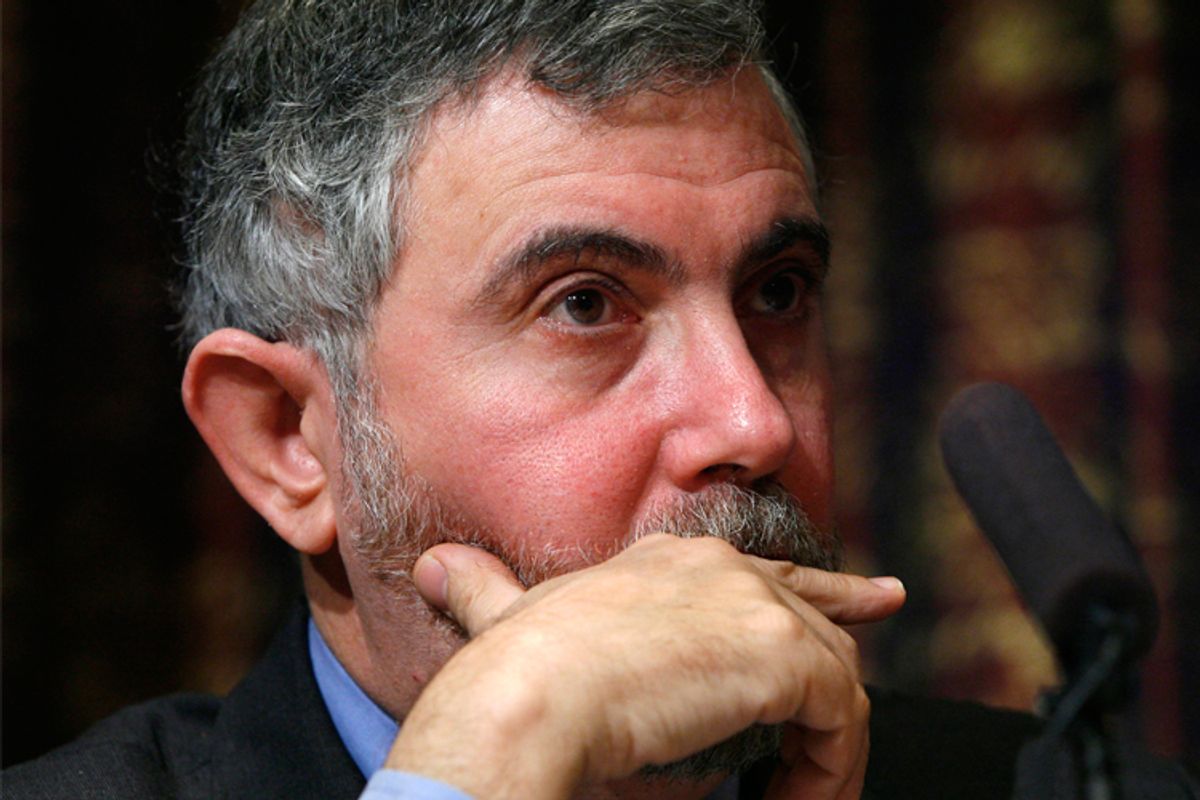 No better proof that the right feels continues to feel threatened by Paul Krugman is needed than the sight of The National Review's Stephen Spruiell devoting a whopping 3600 words to a full-bore assault on the man. Spruiell is ambitious -- his magnum opus is no ordinary takedown, as proven by the concluding sentence alone.

But he is more like Captain Ahab, leading his diminishing crew of followers on a doomed quest in search of the great white stimulus package that will redeem us or destroy us, but either way will finally silence all those doubting voices.

Diminishing? Do we have any evidence of this? Are his pageviews going down? Are his blogs and columns any less popular? I can't quantify this, but it seems to me that Krugman's musings are usually ranked very high on the New York Times' list of "most-emailed" or "most-viewed" stories. Certainly the National Review would love to believe that Krugman is in decline, but simply asserting that it is so doesn't wash.

Perhaps what Spruiell means, or hopes, is that Krugman's influence on public affairs is losing force. But this is also an odd accusation to make, since Krugman has criticized virtually every policy initiative of the Obama administration as insufficient or unworkable. If anything, one would imagine that Krugman's influence and number of followers would be gaining as a result. He said the economy was in worse shape than the administration wanted us to believe. He was right. He said the banks should have been broken up. A review of the current foreclosure mess, once again threatening the bottom lines of the too-big-too-fail goliaths, suggests he was right again. He said the stimulus was too small. We can't know for sure if he was right on that, but it's certainly possible. Non-partisan private sector economy-watching firms attribute the stimulus with contributing to economic growth and keeping unemployment from being even worse than it is now. A bigger, better, stimulus could have achieved more.

Spruiell's basic goal is to prove that Krugman's "shrill, mean-spirited, and insincere" partisanship means that he shouldn't be taken seriously -- a charge so ludicrous emanating from the National Review that it's difficult to grapple with without one's head exploding. Krugman is "a man caught in the grip of a powerful ideology he believes in his heart to be true"? This statement is far more true of the Republicans and National Review columnists who, despite the evidence of the last few years, believe that tax cuts and deregulation are still the only correct answers for all the evils that assail us.

Most of Spruiell's words are devoted to attempting to find inconsistencies between what Krugman professed to believe before, driven mad by George W. Bush, he turned irredeemably partisan. It's an easy game to play with someone who has as long a track record and as fierce a rhetorical style as Krugman. But Spruiell gives far too short shrift to a point he mentions only in passing -- the fact that Krugman has been nearly as virulent a critic of Obama as he was of George Bush.

Because that's exactly why we know Krugman is sincere, and should be taken seriously. From day one of the Obama administration Krugman has been as tough on his own side as he was on his enemies. There was no grace period, no slack, and no compromise.

This must confound and perturb Republicans, because they have nothing similar. Bruce Bartlett is the only pundit who comes to mind, and the man was excommunicated for daring to criticize the profound un-conservativeness of President Bush's policies. Bartlett's great sin was being right, of course, and that, alas, is Krugman's as well. He was right, again, and again, and again, in his critique of the Bush administration, and his early-and-often disappointment in Obama has also been increasingly ratified as time has passed.

National Review readers will doubtless enjoy Spruiell's article. Krugman, I imagine, will just see it as an endorsement.