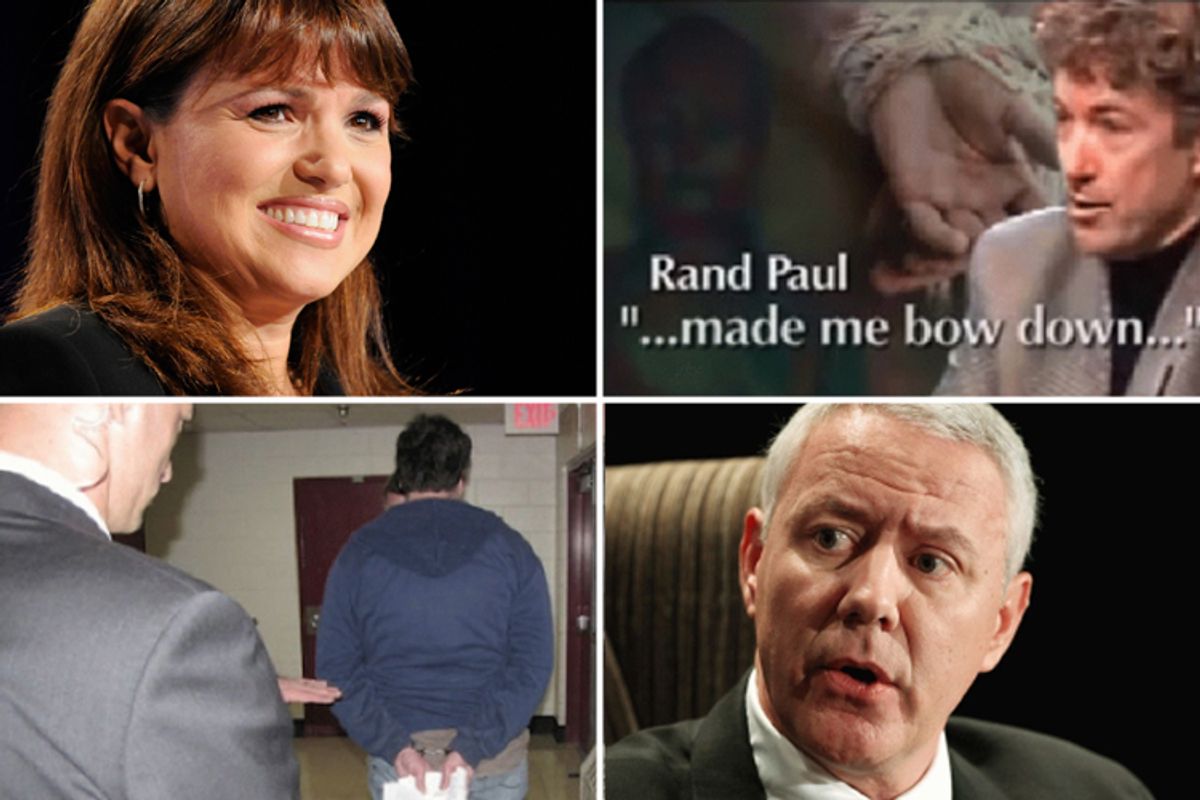 Ross Douthat thinks liberals are deluding themselves about the composition, ideology and political effectiveness of the Tea Party movement, but his timing couldn't be much worse. His Monday column came after a weekend in which three Tea Party candidates in major Senate races created media firestorms that may threaten their November chances.

Douthat claims that, other than Carl Paladino, Christine O'Donnell and Nazi-dressing Rich Iott, the Tea Party "has elevated smooth-talking, eminently electable candidates." But one of the smooth-talkers he cites, Colorado's Ken Buck, went on national television on Sunday and declared that homosexuality is a choice in the same way that alcoholism is. That declaration came a few days after stories about his apparently cavalier attitude toward a possible rape case as a district attorney dominated the news. As I wrote earlier today, these are exactly the kinds of distractions that could scare off swing voters in Colorado, who -- all things being equal -- are ready to vote Republican this year.

Then there's Joe Miller, the Tea Party favorite in Alaska who, you may have seen, is all over the news this morning because of his campaign's decision to handcuff and detain a reporter over the weekend. As the Republican nominee for a Senate seat in a deeply conservative state, Miller should have no trouble winning in November. But episodes like this create the possibility that just enough voters will end up viewing him as a fringe character who's unfit for federal office. Miller leads in the polls now, but that's no accomplishment in this climate. Antics like this weekend's give his opponents, Lisa Murkowski (running as a write-in candidate) and Scott McAdams, hope they'd never otherwise have. That we're even talking about the Alaska Senate race this deep in the campaign season is testament to how the Tea Party has complicated the GOP's 2010 playbook.

The same can be said about Kentucky, another conservative state where the GOP should have no trouble winning a Senate race this year. And Rand Paul, the Republican nominee, may well end up winning; polls have shown him leading his Democratic opponent, Jack Conway, since the May primary. But his margins have not been convincing, and the news today represents a real distraction for the GOP, with Paul's bizarre "Aqua Buddha" collegiate hijinks playing a prominent role in a Sunday debate.

Douthat is right that Tea Party candidates are leading in most key Senate races, but he ignores the fact that many of them are not leading nearly by the margins a Republican candidate should be in this climate. His confusion stems from his very flawed premise:

The Democrats are weeks away from a midterm thumping that wasn’t supposed to happen, and the liberal mind is desperate for a narrative, a storyline, something to ease the pain of losing to a ragtag band of right-wing populists. Something that explains the Tea Parties — and then explains them away.

This is a convenient way for Douthat to frame the midterms, but it's utterly false. The reality is that the "thumping" Democrats are facing was always supposed to happen, from the moment Barack Obama was elected back in 2008.

As I've written over and over, midterm elections are driven by buyer's remorse; it's no coincidence that the White House always loses seats in them (except in 1998 and 2002, both cycles in which there were extenuating circumstances). Add in the presence of massive Democratic congressional majorities (the product of Democrats' success in marginal and Republican-friendly districts in 2006 and '08) and the worst economic crisis in decades and, well, there was no way around it that Obama's poll ratings would fall in 2009 and 2010 and that his party would suffer significant midterm losses. As I wrote back in December 2008 in a column that advised ambitious Democrats not to run for higher office in '10:

That brings us to 2010. On the surface, it looks like another promising year for Democrats, particularly in the Senate, where the GOP will have more turf to defend -- some of it in states like Ohio, Pennsylvania, Florida and New Hampshire, where Democrats have had much success these past two elections. In a climate like 2008 or 2006 -- or even like 2000 or 1998 -- the stage would seem set for a strong Democratic year.

But by Election Day 2010, Democrats will have been running Washington for nearly two years. As economist Paul Krugman suggested in Monday's New York Times, no matter what Barack Obama does in the coming months, dreadful economic news is likely for all of 2009, perhaps well into 2010. Americans have invested considerable hope in Obama -- more than they have in most incoming presidents -- but, amid perpetually gloomy news, this optimism will eventually give way.

Suddenly, those promising targets for Democrats might not look so inviting ...

Obama's team was aware of this, too. In this weekend's New York Times magazine, David Plouffe recalled that just after the '08 election, he told Obama that "at some point that at the end of ’10, his approval rating could be low- to mid-30s." For all the attention Obama's polling woes have received, there's really nothing remarkable or startling about them, given the economic climate; he and his party are in exactly the same spot Ronald Reagan was at this point in his presidency, when Democrats were jubilantly labeling the Gipper a certain one-termer.

This is an important point, because Douthat's piece rests on the notion that the Tea Party represents an extraordinary political phenomenon -- one that has positioned the GOP for success this year that it otherwise wouldn't have enjoyed. But that's not at all valid. With or without a Tea Party, 2010 was always going to be a terrific year for Republicans, simply because swing voters -- note that I didn't say independent voters, who (no matter what they tell pollsters) tend to be loyal to one party or the other -- are ready to latch onto the GOP as a vehicle of protest. Again, nothing new here; Democrats benefited from this in 2006, Republicans did in 1994, and Democrats did in Reagan's '82 midterm.

Nor is the Tea Party itself anything new. "Tea Party" is simply the name that members of the Republican Party base (including functionally Republican independents) have given themselves. But their anger and mobilization is hardly new: think of the right's reaction to Bill Clinton in 1993 and 1994, or to Jimmy Carter and the Panama Canal treaty in the late '70s; or to Lyndon Johnson and the Great Society in 1966. This is the fourth straight time that a fierce right-wing backlash has greeted simultaneous Democratic control of the White House and Congress. It's the first time it's been called the Tea Party, though.

The Tea Party hasn't won over "independent" voters to the GOP; the extra swing voters who are coming aboard the GOP ship are doing so because, with Democrats running the White House and Congress and with unemployment stuck near 10 percent, they have nowhere else to go. The question, as I noted above, is whether certain individual Tea Party candidates will end up scaring off enough of these swing voters to cost the GOP a few winnable races. Of course, the climate is so favorable to Republicans that most of these Tea Party candidates will probably win; right now, O'Donnell is the only one that's a sure loser. But in terms of important lessons, all this will tell us is what we've known since Obama was elected: 2010 is the kind of year when Republicans have to try really hard to lose.

The swing voters who will make the difference for Republicans this year are not committed ideologues; they are the political equivalent of fair weather fans, and they will return to the Obama fold in 2012 if the economy turns around -- even if it means having to rationalize all of the things they're now telling pollsters about deficits and government spending. Republicans should know how this goes: Swing voters, egged on by Democrats, were screaming about Reagan's exploding deficits in 1982. Then, between 1982 and 1984, Reagan tacked on about $700 billion more in debt. But in that same span, joblessness dropped by more than two points. He was reelected in a rout.

The lesson is simple. If the economy improves, we'll stop hearing about the Tea Party. If it doesn't, Republicans can keep winning in spite of it.