A bacon, apple and onion tart that would shock my inner child

When I was a kid, I wanted apples to stay away from my dinner. My, how this dish shows I've grown 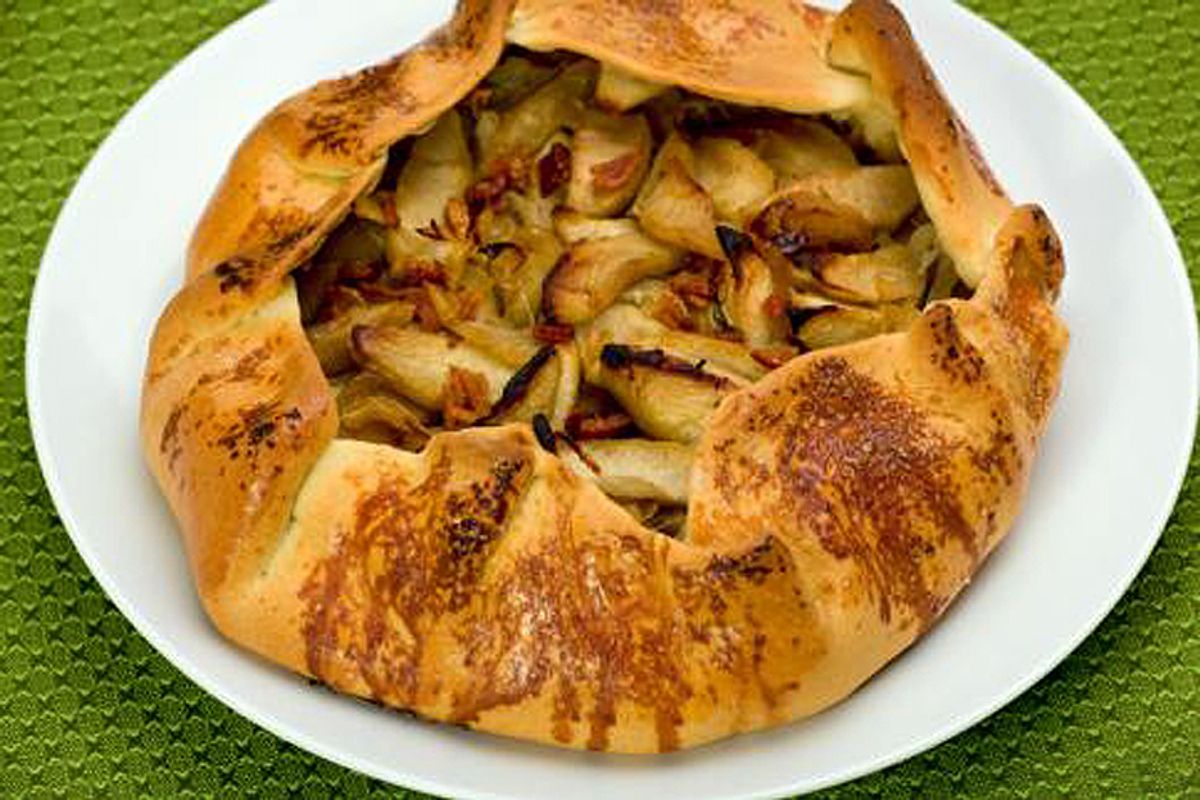 When I was a kid, I had a couple of non-negotiable views about apples. First among these: They were fruit, which meant they didn't count as dessert unless cooked and sweetened in some way. Apple pies and apple turnovers counted as suitable desserts. Slices of apple and apple pieces in fruit salad didn't.

My second fundamental belief about apples was that since they were fruit, they were sweet. And sweet things such as fruit didn't belong anywhere near non-sweet things. The idea of putting cheddar cheese on top of apple pie struck me as downright repulsive.

My beliefs about the ontological status of apples were subverted, ever so slowly and sneakily, by the most unlikely of sources: Laura Ingalls Wilder's Little House books.

"Farmer Boy" also contained the most disturbing recipe in the series -- one that grated against my sensibilities and haunted my nightmares for years. Horrifyingly, it was the favorite dish of Almanzo Wilder, Laura's future husband:

... They talked about spareribs, and turkey with dressing, and baked beans, and crackling cornbread, and other good things. But Almanzo said that what he liked most in the world was fried apples 'n' onions.

When, at last, they went in to dinner, there on the table was a big dish of them! Mother knew what he liked best, and she had cooked it for him.

Apples. And onions. Fried together. Good God, this was just wrong. Reading this as a youth, I felt terribly disappointed in Almanzo, who otherwise seemed like a pretty cool kid.

I eventually grew up and gave up childish things. And I had nearly recovered from the trauma of fried apples 'n' onions when, a few years after I'd finished college, I got a copy of the charming "The Little House Cookbook: Frontier Foods from Laura Ingalls Wilder's Classic Stories for Christmas." Clearly, I wasn't the only one taken with an urge to make salt-rising bread and maple candy after reading the Little House books, and an intrepid soul painstakingly reconstructed many of those old-time recipes. And one of them was fried apples 'n' onions! Ack!

I read through that recipe with fascinated repulsion dozens of times, but didn't quite work up the nerve to try it. But after years of trepidation, I've finally made peace with the concept.

The recipe in "The Little House Cookbook" involved sliced, unpeeled apples and sliced onions fried together in bacon fat. When I first saw the recipe, I grudgingly admitted that the presence of bacon fat made the dish seem slightly less repulsive. But now I realize why: First, bacon makes everything it touches taste better. Second, bacon has both sweet and savory notes, and could potentially mediate and meld the contrasting flavors of apples and onions. Pure freaking genius!

The more my rational adult mind thought of it, the better the apple/onion/bacon combo sounded.

"The Little House Cookbook," written in the 1979, describes fried apples 'n' onions as a down-home country dish, one of those under-the-radar preparations so routine few people thought to write down recipes for it. Thirty years later, it feels downright modern, if not shamelessly trendy. And I've always wanted to be one of the cool trendy kids.

To make this old-time, yet weirdly prescient preparation even more modern, I've enlivened the apples and onions with a touch of rosemary, and turned it into a filling for a galette -- a free-form, open-face tart. (The galette dough recipe is lightly adapted from one of my favorite cookbooks, Deborah Madison's "Vegetarian Cooking for Everyone.") It makes a nice light meal with a salad on the side. Think of it as an apple pie for grownups -- that you get to have before dessert.

To form the galette: