Krugman's "rogue economic nation" goes its own way again. But does that really make the world worse off? 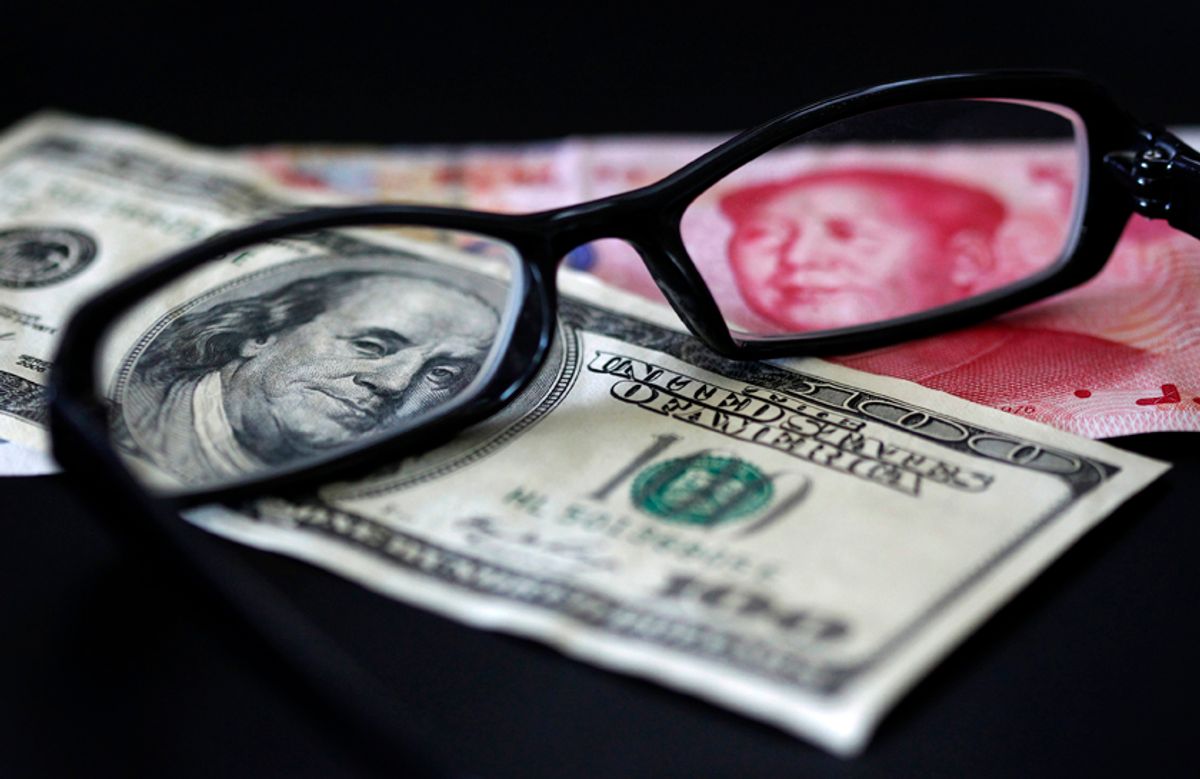 A U.S. dollar note (L) and a Chinese yuan banknote are seen through a pair of spectacles in this picture illustration taken in Taipei October 13, 2010. China's foreign exchange reserves soared in the third quarter and its trade surplus remained hefty, showing that the country is under both economic and political pressure to let the yuan rise more quickly. REUTERS/Nicky Loh (TAIWAN - Tags: BUSINESS) (Â© Nicky Loh / Reuters)
--

China's "shock" decision to raise interest rates by a quarter of a percentage point on Tuesday jolted world financial markets. Oil prices and stock markets fell, on the expectation that China's move would impede domestic economic growth, thus decreasing that nation's demand for commodities and possibly placing a drag on the larger global economy.

China's reasons for the move are clear: After successfully emerging from the global recession through the combined powers of a huge stimulus and an artificially weak currency, China's economy has been growing like gangbusters, and inflation is on the rise. U.S. and European central bankers would likely do the exact same thing if faced with a similar inflationary push. But China is also determined to be aggressively proactive in avoiding a potential crash. In recent months, China's leaders taken strong measures to quash the kind of disastrous property bubble that blew up the U.S. economy

Officials raised the reserve requirements for six banks for a two-month period, three people with knowledge of the matter said last week ... China will speed up the introduction of a trial property tax in some cities and then expand the levy to the whole country, the government said Sept. 29, without giving a timetable. The state also told commercial banks to stop offering loans to buyers of third homes and extended a 30 percent down payment requirement to all first-home buyers.

Considering the effect a mere interest rate hike in China has on financial markets worldwide, it doesn't seem like a stretch to think that an actual Chinese economic crash would be bad news for the entire world. If U.S. government leaders had been able and willing to slam on the brakes when the U.S. property bubble was accelerating, perhaps the Great Recession could have been averted.

But that's not how some critics see the move. Paul Krugman, who has been doubling down in recent days on his assertion that China is a "rogue economic nation," argued immediately that China's interest rate hike is more evidence of the country's "beggar-thy-neighbors" policy.

We're doing the right thing; they're making the world as a whole worse off.

The whole world? I wonder whether Australia, and other commodity exporting nations in Africa and South America, would support that thesis. Chinese economic growth has been very good for their economies over the last ten years. Africa has enjoyed the best overall growth in many decades, in large part due to China. Yes, emerging markets, as reported by the Wall Street Journal, were hammered by the interest rate move.

But how much worse would they be hurt if China's economy crashed altogether?

Nonetheless, it's also true that China's move, in the short run, hurts the U.S. Higher interest rates in China will attract foreign capital, thus having the perverse effect of strengthening the dollar at exactly the time when a low dollar is most in the interest of the U.S. So in a zero-sum game between the U.S. and China, the U.S. loses ... unless China matches its interest rate hikes with policy moves favoring a stronger yuan. (SEE UPDATE BELOW.)

At the very end of a Financial Times article on the rate hike, Nick Chamie, head of emerging markets research at RBC Capital Markets, is quoted as saying that the hike "was the start of a cycle of rate rises in China to be accompanied by further appreciation in the Chinese currency against the US dollar."

That would be a good thing indeed, but it will have to be seen to be believed. But it is fundamentally inevitable. China's primary goal is stable, strong economic growth. A trade war with the U.S. would endanger that. But so too would the kind of drastic, immediate revaluation that Krugman and others demand. Some sort of gradual, mutual accommodation has to happen. If today's rate hike is a first step in that direction, that would be exactly the kind of shock the world needs.

UPDATE: Richard Portes points out some sloppy thinking and writing here. The dollar did go rise after the Chinese rate hike, but only because it was serving as a safe haven for investors fleeing stocks and commodities. There is no causal connection between an interest rate hike, foreign capital moving to China, and a rising dollar. Quite the opposite.