Her odd, amazing gift to me

What my client left for me sounds bizarre, but it was a priceless reminder that her body was recovering from cancer 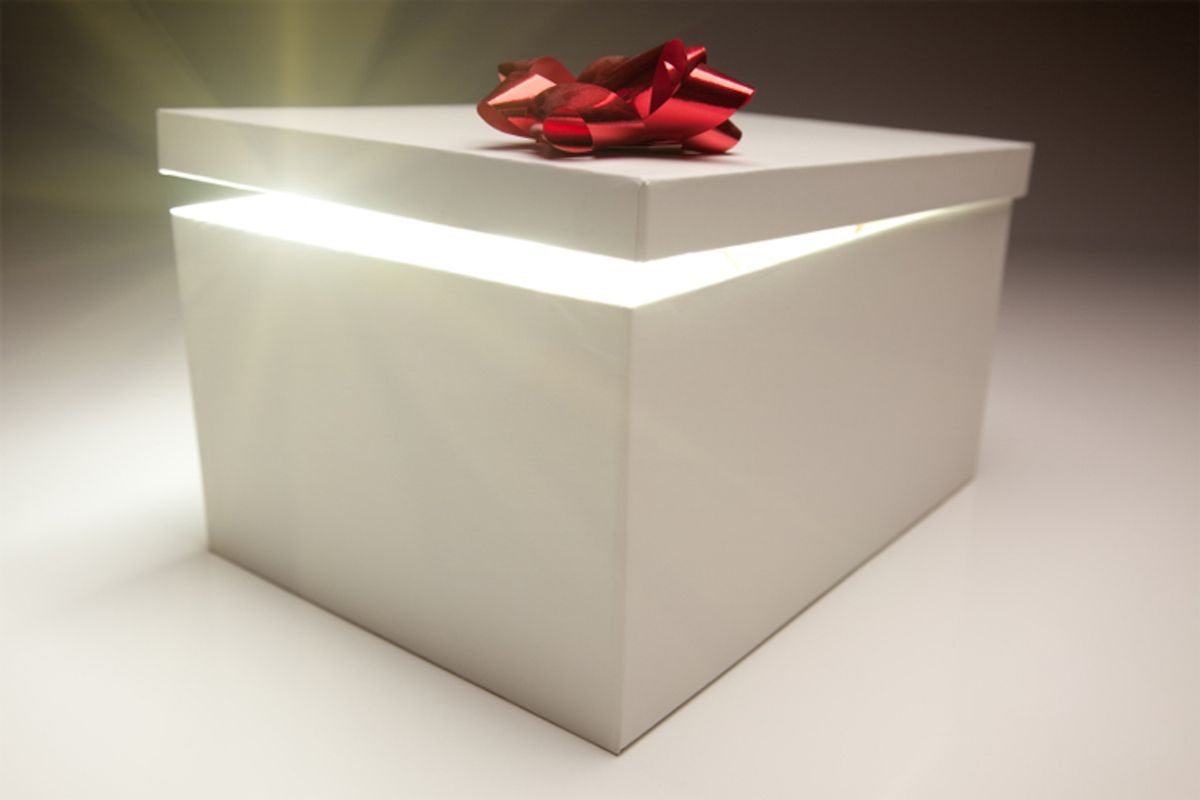 According to family lore, my grandfather, a brilliant surgeon, was given the home he lived in for most of his married life by a grateful patient. A Navy man decorated for his service during the battle of Midway, Pappy, as my grandpa was called, immediately installed portholes next to the traditional wood windows facing the marina. As a kid, peering at the Golden Gate Bridge from an upstairs bedroom, I often thought that the house-for-a-life swap was a fair trade.

None of us followed in my Pappy's footsteps, though a few stumbled along at a distance. My father, a devoted veterinarian, came close. His specialty was orthopedic reconstruction, but he gathered strays like Brigitte Bardot. Not the resolute white coat his daddy was. I'm a massage therapist working in clinics and hospitals, most of the time with people struggling with illness or chronic pain. But I deliver comfort, not cures, and the gifts I've received in the line of duty have been totems of memorable kinship, like the tiny paper cup holding two Vicodin a hospital patient rejected as unnecessary after our session. (I had to refuse that particular gesture.) Others demonstrate satisfaction by going to sleep -- finally, for the first time in days -- or they tell me I am wonderful. Recently a woman reached way down into the crotch of the black leggings she was wearing under her hospital gown to fetch me a dollar bill.

In the clinic, an appointment might end with a hug or the silent offering of a tea bag or a square of chocolate. These rewards feel extravagant, even when I think of them as acts of reciprocity rather than gestures of gratitude. So I was surprised to find, when I checked in at the reception desk between sessions the other day, that a patient had left me a small box -- the kind that inevitably contains jewelry.

"I'm not supposed to tell you who it is from," said the office manager, handing over the tiny package, "but they said you would know when you opened it."

My role in the lives of the people who come to see me is not without its triumphs, but you won't see an episode of "House" built around my uncanny success. I solve a mystery now and then, but the solution usually comes from the "hip bone's connected to the thigh bone" type of knowledge. I prescribe no medication; I can't remove an offending mass; I offer no second opinion. Instead, I provide customized healthcare with meticulous intimacy. I absorb detailed descriptions of pain, weariness, disappointment and fear; and I am granted exceptional proximity to use my hands and my instincts to treat bodies, sometimes one muscle at a time, exhausted by the collateral damage of illness, trauma and unrelenting tension. I do the work selfishly, still amazed that people grappling with pain and disappointment allow me to help.

The blunt instruments used to fight cancer are especially punishing. Dr. Mehmet Oz, usually a very gentle guy, once demonstrated the brutality of conventional cancer treatment using a dollhouse with a light on in one room to represent a body with cancer. He smashed the house (the body) with a sledgehammer until the light (the cancer) finally went out. I didn't get a chance to see the performance, but one of my regular patients, an actress with breast cancer and a gift for exquisite profanity, said that Oz came close to accurately describing the beating delivered by surgery, chemotherapy and radiation. I thought she came closer, nailing the experience with scrupulous honesty each week as she sipped green tea from a stainless steel to-go cup and whipped off a wig -- sometimes a bright red bob, other times a platinum pageboy -- that she'd gotten from friends in the costume department.

Just before starting chemo, and before her first appointment with me, the salty actress had undergone surgery unrelated to her cancer, and she had a small incision beneath the toes on her left foot. The failure of this wound to heal was evidence, to her, of chemo's inexorable toll. The cancer killing drugs were beating the crap out of her immune system, which she imagined to be in acute distress, unable to muster the strength necessary to attend to other important business.

I’m not sure why, but the incision became a symbol for me, too. It became a measure of my worth. Yes, I've been doing this work for years, and I know that it is effective. (A recent study from Cedars-Sinai Hospital in L.A. found that a single session of massage boosts white blood cell production, among other nifty biologic changes.) But with each person, I begin again. And in this case, I had an angry little barometer, red and raw, to chart my progress.

Each week, toward the end of our session, I would arrive at the actress's foot for a closer look. She found the wound annoying most of the time, depressing now and then. She had to double bag it to take baths, and endure, occasionally with sardonic pleasure, the squabbling between doctors about what to do to make it better. And then, slowly, it started to heal. When a healthy scab began to pull itself together, I crowed. It was a pea-sized beauty, a wrinkly brown badge of honor. I suggested that, when it finally fell off, she could preserve it, Victorian-style, in a locket, or press it, like a flower, between the pages of her journal. She said I was disgusting, but I could tell she was as gratified as I was to see her body kicking ass as it should, despite the bombardment with chemicals she likened to Drano.

On the day I was handed the elegant box, the actress had been unable to get to her appointment. She was cancer-free now, busy with several Shakespeare productions, caught in traffic. But I realized, as I burrowed into the nicely folded tissue, that she must have stopped by. And I knew what this gift would be: a tiny beige gem, still festooned with a tiny suture, suitable for framing. You shouldn't have, I told her later. But I was dizzy with pleasure for days. It was more than a fair trade. It was an indulgence.