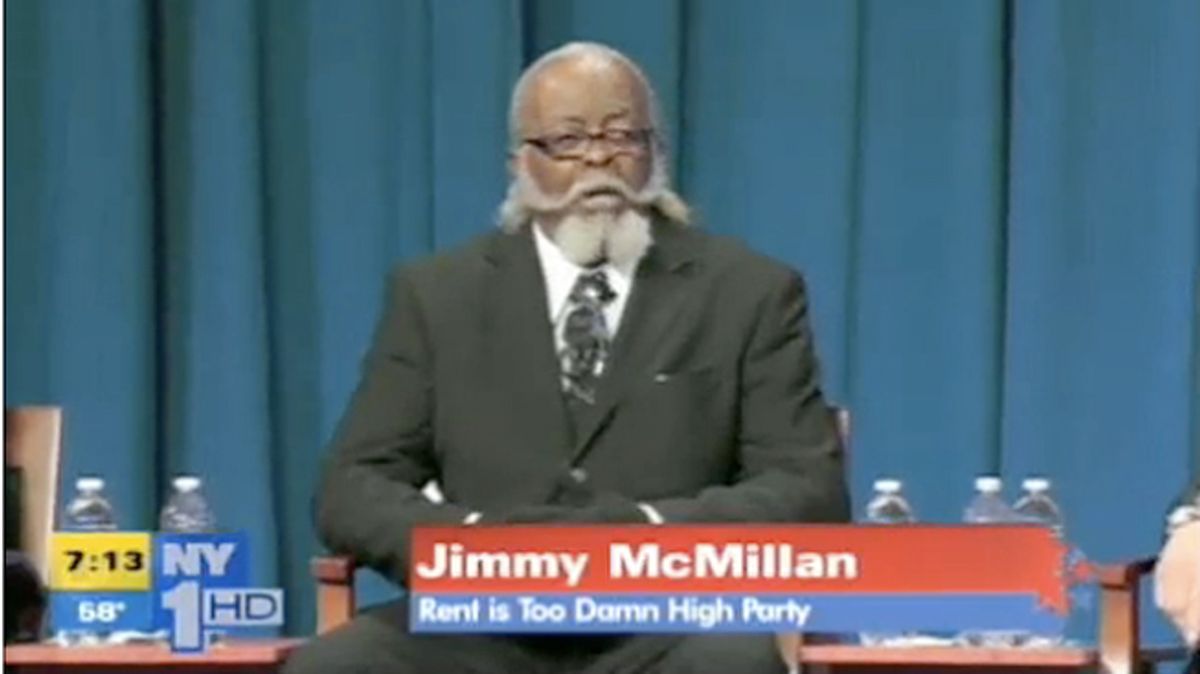 As you've surely seen by now, the breakout star of Monday night's seven-way New York gubernatorial debate was Jimmy McMillan, the begloved candidate of the Rent Is Too Damn High Party, who bragged about his karate expertise and promised that "if you want to marry a shoe, I'll marry you." And whatever oxygen McMillan didn't take up was pretty much monopolized by Kirstin Davis, the ex-madam who recited a series of pre-scripted one-liners, like her warning that more taxation would mean that "businesses will leave faster than Carl Paladino at a gay bar."

This made for a vastly more lively forum than most voters are accustomed to it, but from Paladino's standpoint, it was completely counterproductive. After all, he entered the debate running about 30 points behind Andrew Cuomo -- badly needing to distinguish himself, and to force Cuomo into some kind of embarrassing slip-up, in order to have any chance on Election Day. But the presence of five other candidates, who together gobbled up about 70 percent of the debate's time and who prevented one-on-one exchanges between the two major candidates, made it impossible for him to achieve this. Which is probably why Paladino, in an interview on WOR this morning, branded the format "terrible."

But here's the catch: The format is pretty much all Paladino's fault.

Ordinarily, an overwhelming frontrunner like Cuomo would be the one demanding that every candidate on the ballot be included in a debate; it's a simple risk minimization strategy. But it was actually Paladino who wanted McMillan, Davis and all of the other niche players on stage with him, a posture that has puzzled political observers. Here's how Newsday explained it earlier this month:

If you ask Paladino advisers about this, though, they offer this basic rationale: they don't think Paladino would win a one-on-one debate with Democrat Andrew Cuomo. "Andrew is an experienced debater. Carl has never been in a debate before," said Roger Stone, a longtime New York political operative who is informally advising Paladino.

Which, as rationales go, is pretty ludicrous. Sure, a one-on-one debate could have hurt Paladino (well, hurt him more than his decision to walk off the stage in search of a bathroom during last night's closing statements) -- but that presumes he had much to lose in the first place. The idea that blending in with a bunch of other bodies on stage might somehow propel Paladino to a come-from-behind win is absurd.

Of course, Stone's explanation starts to make a little more sense when you realize that, in addition to helping Paladino, he is also advising the campaign of...Kristin Davis.

Not surprisingly, Paladino is now demanding another debate. And not surprisingly, Cuomo is refusing. "I think the debate yesterday served a purpose to the extent that people want to see all the candidates there and discuss their platforms ... So I think we pretty much [have] seen that," Cuomo said.