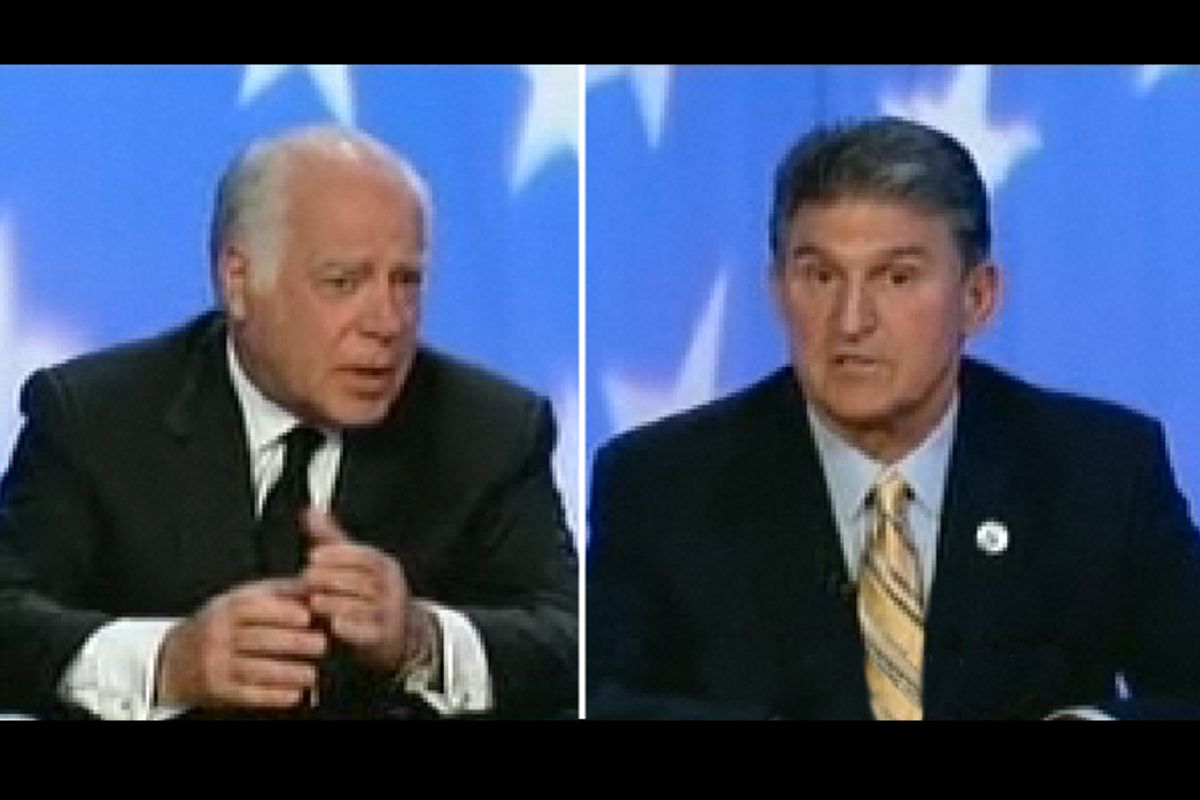 Man, did John Raese lay it on thick Monday night. In the only scheduled debate in West Virginia's Senate race, the GOP nominee matter of factly said he opposes the healthcare reform law because "I don't like socialism," repeatedly called global warming a "myth," reiterated his opposition to the existence of a minimum wage, and summed up his vision for the war in Afghanistan thusly: "We win, you lose."

In so doing, the 60-year-old businessman, a starchy public performer who has tried and failed to win statewide office three times before, achieved something remarkable: He made Joe Manchin a sympathetic figure to progressives watching at home.

Roughly speaking, Manchin, the second-term governor and Raese's Democratic opponent, is West Virginia's answer to Ben Nelson -- a veteran pol who labors hard to cater to his state's conservative sensibilities, often by taking positions that irk and enrage Democratic activists. Manchin opposes abortion, gun control, cap-and-trade, and a second stimulus, supports extending the Bush tax cuts across the board, and takes pains to distance himself from Barack Obama and congressional Democrats. He is also, according to recent polling, in serious danger of losing to Raese in the race to succeed the late Robert Byrd -- an outcome that could potentially cost Democrats control of the Senate.

Against that alarming backdrop, Manchin probably didn't look too bad to the left on Monday, if only because he represents the Democrats' best and only chance of holding off Raese, one of the more arrogant and charmless Tea Party candidates on the ballot this fall. On question after question, Raese combined the irrational hysteria that now defines the GOP base with a businessman's polish.

Branding it "pure, unadulterated socialism," Raese called the healthcare reform law "the worst bill ever to come out of the United States Senate and House." (I guess the Fugitive Slave and Indian Removal Acts just slipped his mind.) It took one of the minor party candidates on the stage to point out that, if anything, the law represents "capitalism on steroids," with the government steering millions of new customers to private insurance companies. But details like that don't matter to Raese or his base; Obama feels like a "socialist" to them, so they throw the term around with abandon. It's the triumph of truthiness.

Equally maddening was Raese's attempt to frame his opposition to the minimum wage as a pro-worker stance. The minimum wage, he said, "is something that nobody can live on. It's too low. I don't like government setting price controls, I don't like wage controls. I want a better wage for everybody." Get that? To ensure that the workers struggling to get by on $7.50 an hour receive a bigger paycheck, make it possible for companies to pay them less. Is it any surprise that Raese is a wealthy industrialist, the owner of West Virginia's largest limestone producer? At another point, he expressed bafflement that environmental and safety regulators don't solicit more recommendations from corporate executives. (The prospect of Massey Energy executives writing regulations could make for a good anti-Raese ad.)

Taking in Raese's performance, it was hard to work up much outrage over Manchin's centrism. Sure, his healthcare position is also incoherent: He endorsed the basics of the new law, but called for the repeal of the mandate -- which is pretty much the key to the whole thing working. But Manchin was also willing to embrace and defend the idea of a social safety net. Healthcare reform, he noted, is so important because working people -- unlike the poor, who have Medicaid, and unlike the elderly, who have Medicare -- are particularly "vulnerable."

"I believe that basically every time this country got in trouble every time time we hit bottom, it’s the Democrats who stood up and helped people, the average person trying to make it, people trying to take care of their families," Manchin said. "I believe very strongly in that."

His pitch had an old school feel, an attempt to rally the New Deal/Great Society sensibility that helped Democrats dominate the middle part of last century. It's a pitch that has worked less and less for in recent decades; non-college educated white voters favored John McCain over Barack Obama by a two-to-one margin in 2008. Government, many of these voters believe, now mainly helps "others" at their expense. Manchin was reminding them that it can and does work for them, too -- and watching him in action Monday night, it seemed he might just get them to buy in, even in the year of the Tea Party. If he can do that, Manchin may yet prove a valuable addition to his party's Senate ranks.