Why "Glee" is the new "Rocky Horror"

Like the gender-bending musical, the Fox series is breaking down boundaries. Bring on next week's episode! 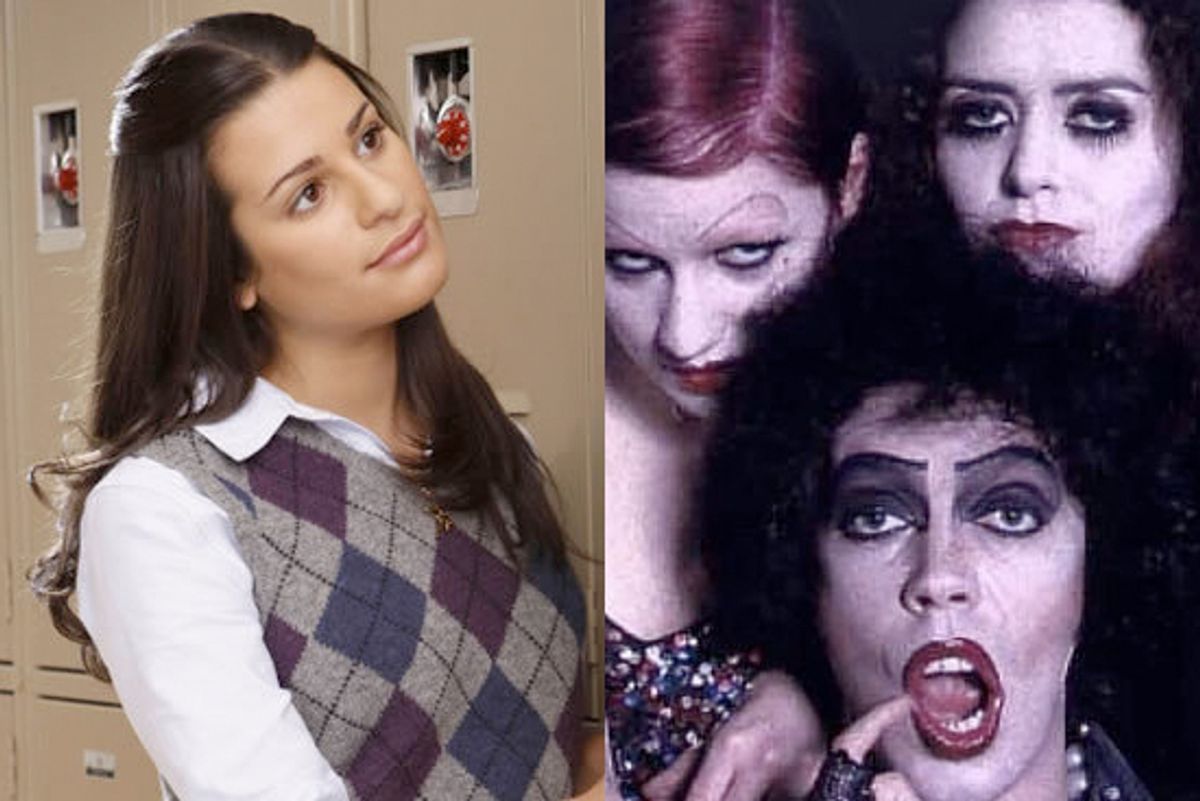 Left: Lea Michele as Rachel in "Glee." Right: A still from "The Rocky Horror Show."
--

It was no shock when Fox announced that the Oct. 26 "Halloween"-themed of "Glee" will riff on the cult musical "The Rocky Horror Picture Show." On top of that "Well, but of course!" announcement, add another: According to Deadline, "Glee" creator Ryan Murphy is in talks with studio subsidiary Fox 2000 about directing a remake of the movie.

Setting aside, for a moment, the question of whether a remake is a good idea (and I tend to think it probably isn't; while the original film was released by a major studio, a good portion of its charm was bound up in its energetic cheapness and outsider pedigree) the "Glee" announcement is perfect. It may even have been inevitable. For what is "Glee" but the continuation of "Rocky" by other means?

Among other notable qualities, "Glee" is, by consensus, pretty much the gayest network series ever to become a pop culture touchstone. And it's broadcast television's most unabashed expression of the hormone-addled, group-hug idealism you'll find in a high school theater troupe, glee club, or any other organization in which people that might not ordinarily speak to each other join forces to rehearse a Supremes medley or stage a no-budget production of "Gypsy."

By which I mean "Glee" serves much the same function for young 21st-century viewers that midnight showings of "Rocky Horror" did a generation ago. It creates a kind of virtual big tent under which kitsch lovers, self-identifying outsiders, and musical theater queens from all walks of life can gather, celebrate what they love, and feel assured that they're not alone in their interests and feelings. And it strives imperfectly (and often too earnestly) to communicate a post-'60s message: that sex is the great equalizer, and "acceptable" behavior is whatever gets you through the night..

In that last respect, "Glee" isn't as provocative and ahead-of-the-curve as "Rocky Horror." The movie, based on Richard O'Brien's 1973 stage musical, positions a hopelessly white-bread straight couple, Brad and Janet (Barry Bostwick and Susan Sarandon), as outsiders getting schooled in the fine points of no-strings bohemian grooviness, and ultimately loving it. They're repressed breeder tourists getting pulled into the nightmare-cum-dream world of Dr. Frank-N-Furter (Tim Curry), giving into its exotic allure, then evolving to the point where attitudes and sexual practices that once seemed strange and terrifying are revealed as a lifestyle choice -- or a lifestyle, period.

When Brad and Janet first arrive at Frank's castle and survey the assembled party guests -- a mix of young and old, male and female, white and nonwhite extraterrestrials from the planet Transylvania, dressed in modified black tie/chorus line ensembles that reinforce their basic alikeness-- Brad nervously says, "They're probably foreigners with ways different from our own." After a while, though, Brad and Janet learn the language, drop their resistance to Frank's advances and give in to his awesome pansexual charisma. "Don't tell Janet," Brad says as the doc goes down on him. During Janet's tryst with Rocky -- set to the tune of "Creature of the Night," the camera adopts her point of view as she lies on her back in bed writhing in ecstasy, and director Richard Sharman dissolves between close-ups of multiple characters -- male and female; straight, queer and bi -- all seeming to have a go at her. The film's climax (cough, cough) is a combination Esther Williams water ballet and aquatic orgy set to "Don't Dream It, Be It," with most of the major characters merging into a tangle of limbs while offstage, the scold Dr. Scott's singing voice rises a full octave and his once-paralyzed legs grow fishnet stockings and high-heeled shoes.

It's impossible to underestimate the effect this film must have had on teenagers and college students in the '80s and '90s, the peak years for audience participation revival showings of "The Rocky Horror Picture Show." Under eight years of Ronald Reagan and four years of George H.W. Bush, the national character became more belligerently and defensively straight than at any time since the 1950s. Young viewers who grew up in major cities with gay (or "artistic") neighborhoods doubtless weren't blindsided by any of the images or attitudes showcased in Sharman and O'Brien's camp masterpiece. But for viewers who grew up outside such urban centers -- or that were raised in whatever geographical locale believing that the only acceptable social-sexual flavor was plain vanilla -- the film was a revelation. "I don't like men with too many muscles," Janet says, surveying the doctor's creation. "I didn't make him for you!" Frank snarls.

There are, to the best of my knowledge, no scientific studies quantifying the effect of "Rocky Horror" on sexual attitudes. But anecdotal evidence must count for something, and every conversation I've ever had with people that attended these shows regularly points to an eye-opening and ultimately liberating effect. You had to be one seriously tight-sphinctered basket case to sit in an audience filled with people in homemade "Rocky Horror" costumes throwing rice and high-kicking it on stage and not feel at least a twinge of amusement and fellow-feeling. It was a movie in which announced that even characters as mainstream-typical as Brad and Janet could have fantastic and previously unthinkable sexual experiences without relinquishing their basic identity, and that the sorts of people Brad and Janet previously thought alien and terrifying had deep fears and big hearts. (Tim Curry's performance is one of the greatest in the history of movie musicals. How can you look at his face during "I'm Going Home" and not be moved?).

The heyday of "Rocky Horror" midnight showings was also the era of AIDS fundraisers and anti-discrimination protests that included straights as well as gays, lesbians, bisexuals and transgendered people. And it was the era in which large numbers of gay and lesbian student groups began petitioning university student governments for official recognition and funding, and often winning both. (This even happened at my alma mater, Southern Methodist University, a red state school if there ever was one, during the 1990-91 school year -- a movie time frame dominated by "The Silence of the Lambs," a film whose villain was a self-loathing, murderous wannabe-transsexual.) Yes, absolutely, progress was incremental, to put it mildly. But you could still see it and sense it. And I feel sure that "Rocky Horror" helped engender it, simply by providing a raucous fictional space in which difference could be fetishized and then celebrated.

"In Oklahoma City, the innate homo-bi-ambi-sexuality of the film was celebrated and embraced by all," wrote onetime "Rocky Horror" midnight regular Donald Hightower in a collection of moviegoer memories posted at Edward Copeland on Film. "Even if it wasn't your cup of tea, you celebrated the love, lust and ultimate pleasure of others." "It shouldn't be surprising that the majority of people attracted to 'Rocky Horror' in a cultish way are people who are 'misfits' in society," wrote Jenn Dlugos on ClassicHorror.com. "'Rocky Horror' has always been a weekly party where you are accepted no matter if your sexual preference is men, women or sheep. And you even get to throw food, shout expletives at the screen and wear fishnets. Fun for the whole dysfunctional family."

"Glee" has never gotten anywhere close to that level of goofy utopianism. The series is still what gender studies students might call "hetero-normative," building the majority of both its plotlines and musical numbers around straight couples (mainly Rachel and Finn), and thus far denying the glee club's only black female and out-gay members (Chris Colfer's Kurt Hummel and Amber Riley's Mercedes Jones), love interests (although supposedly Murphy has brought in a possible love interest for this season -- an openly gay private school student played by Darren Criss, who'll make his first appearance Nov. 9.). But all-in-all, the show is a remarkably enthusiastic weekly affirmation of the "Rocky Horror" ethos of "Don't dream it, be it." Class, ethnicity, religion and even mobility issues don't get in the way of kids hooking up (Brittany and Santana may be the first casually bisexual teens on network TV.). And when relationships fall apart, it's usually because of personal differences, not because one character or another can't handle certain boundaries getting breached. And like "Rocky Horror," the series mixes arch/sassy/bitchy humor and a kind of utopian yearning for a world in which gender, class, race and ethnicity matter less than whether you can stand up onstage and express sincere emotion while belting out a song.

If this "Rocky Horror" remake announcement turns out to be bona fide and not some sort of pre-tie-in episode publicity stunt, Murphy has his work cut out for him. We're 35 years removed from the film's first release, and two decades past the point when the "Rocky Horror" midnight phenomenon was at its giddy peak. The film's images of bacchanalian bliss -- like a musical cartoon version of the sexual boundary-blurring images seen in Andy Warhol's Factory films and the music of David Bowie, Lou Reed and their ilk -- have become less innately provocative, and certainly less fresh. And the culture as a whole has a bit of a smug, seen-it-all attitude when it comes to both utopian idealism and the straightforward expression of emotion. Murphy would have to work very hard to equal the surprising power and beauty of the single greatest image in "Rocky Horror": an overhead shot of Frank singing "Don't Dream It" in a pool decorated with a replica of a section of the Sistine Chapel ceiling. The good doctor is at the center of the image, his inner tube positioned over the spot where Adam's fingertip meets his creator's. God's creatures, one and all.